The Best PC Cooling Advice, Based on the Best Reviews!

One of the most cost effective and easiest modifications you can make to improve your PC’s performance is to upgrade its cooling. While you can easily find hundreds of opinions on the best products out there, we’ve taken it upon ourselves to actually test well over 50 coolers and fans in real-world setups (not open benches or airflow chambers) to find products that actually work in, you know, a PC!

Our Latest Cooler and Fan Recommendations!

This guide lists our favorite coolers at every pricepoint, including two low-profile coolers, three towers, and two liquid models. But we didn’t stop there! We also list our favorite thermal paste and the seven best fans on the market, with specific recommendations for cases and coolers.

And take note: we update this guide on a regular basis to ensure that you always get the latest and greatest gear, not the same outdated coolers and fans that everyone’s been using for the past decade! For example, with our latest update, all but one of our cooler picks includes an Intel Socket 1700 bracket in the box, which is important since Intel’s CPUs have dominated the performance charts since Socket 1700 debuted.

Our Tips on Choosing a CPU Cooler

Here are a few suggestions we’ve put together based on all of our testing: 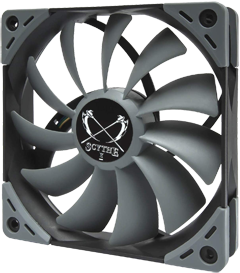 Our Tips on Choosing Case and Cooler Fans

Surprisingly, choosing a fan can be even trickier than choosing a cooler, in part because there is so much misinformation out there, starting with the specs provided by manufacturers. So here are our tips on how to sort through the chatter:

Unlike a lot of other categories of PC components, CPU coolers and fans can be used in multiple systems over time, making them a very good place to invest in the best you can afford! If you decide to purchase one of the options listed below, please use the links we provide, which helps support further development of this guide and the extensive testing that backs up our picks!