Rough-sounding fan becomes noticeable when the PC is under heavy load; no built-in WiFi 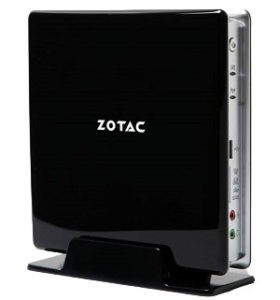 In our “product of the month” reviews, we aim to feature products that provide fantastic value along with broad-based appeal. Ideally, these are products anyone could use and enjoy. There’s no better example of just such a product than the one we’re reviewing this month, the Zotac ZBOX BI320-U-W2, a compact, low-powered “nettop” PC. Featuring an Intel Celeron processor, it’s more than fast enough to handle all manner of Internet-focused tasks, such as video streaming, video chat, and e-mail, while coming in at a frankly amazing price. Introduced at $220 (the price we paid for it at retail back in September 2014), it’s dropped as low as $140 on at least one occasion, and trust us, that price is absurdly low given what the ZBOX brings to the table. Even at its retail price, it’s still an amazing value, as we’ll demonstrate below.

To hit what we consider to be a very fair pricepoint, Zotac had to rely on a special program instituted by Microsoft in mid-2014. In essence, Microsoft lowered the cost of a Windows 8.1 license to between $0 and $10 for manufacturers loading it onto low-priced laptops and nettops. You can thank Google’s ChromeOS for forcing Microsoft’s hand on this. You see, whereas a $50-100 license fee made perfect sense in the days of $1,000+ PCs, consumers are now moving onto very different devices, and typically buying more of them. So an average household may now have a couple of smartphones, one or two tablets, a laptop, plus a desktop. Microsoft’s licensing fees were a significant barrier to Microsoft-based products staying competitive in this environment. 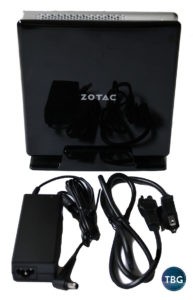 What does all this mean to you, the consumer? Luckily, it’s all good news. The only catch is that any system with this low-priced version of Windows 8.1 will use Bing Search and Internet Explorer by default, but we’d wager that just about anyone can figure out how to change those defaults once they have the product in hand. In return, a whole new class of products was born, and the ZBOX is just about the perfect example of what a cheap Windows license can translate to in the desktop environment.

The ZBOX is equipped with an ultra-efficient, low-priced laptop processor, the Intel Celeron 2957U 1.4GHz dual-core CPU. There’s nothing mysterious about this product – it’s based on the relatively-new Haswell architecture (which until January 2015 was the latest generation, supplanted by Broadwell in the newest of laptops). As we’ll show in our benchmarks, its performance can be readily inferred from its clock speed – it’s just under half the speed of a desktop-class Haswell dual-core. 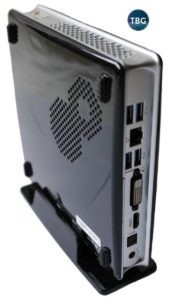 What really sets the ZBOX apart from its competitors is its inclusion of a 64GB solid-state drive. The particular model it uses, by a company called Foresee, isn’t a stand-out in any way, except for the fact that it’s just about infinitely faster than the hard drives used in most low-end PCs. Unless you need more capacity for media storage (and we’d argue that streaming media makes this a rare requirement in a secondary system like this one), we’d suggest you run in the opposite direction of any PC sold today without a solid-state drive! The ZBOX is also equipped with a single 2GB stick of Crucial DDR3-1600 1.35V laptop-style RAM. It has an open slot for a second stick, although we didn’t attempt to upgrade it during our testing, as 2GB is plenty for the intended uses of a system in this price range.

Zotac packed all of the ZBOX’s components into a sleek, compact chassis. It measures 1.8″ thick, and just 7.5″ by 7.5″ in height and width (note that its stand adds another 0.5″ in height). It features a glossy finish, which you’ll either love or hate – the photo above makes clear just how reflective it is. Fingerprints can collect pretty easily on this surface, but overall, we didn’t find it too hard to keep looking nice enough. On the front of the ZBOX, Zotac provides a power button, two LED indicator lights, an SD card slot, headphone and microphone jacks, and a USB 2.0 port, with another USB 2.0 port covered by a rubberized cap on top of the case. The back of the case, shown below, is where you’ll find most of the ports you’ll end up using, including four USB 3.0 ports, an ethernet jack, DVI and HDMI video ports, and even a digital optical audio output, a nod to home theater users, perhaps (although we’d just as soon use HDMI audio in such setups). Alas, one thing the ZBOX doesn’t have is built-in wireless networking, an unfortunate omission in a system likely to be perched on a TV stand or in a kitchen.

Also visible in the photo to the right is the array of venting on top and on the backside of the case. The CPU is actively-cooled, and the fan pulls air in through the figure-8-shaped vent on the back, and exhausts it out the top. Note that rubber feet allow you to easily place the ZBOX length-wise on a desk, in which case you’d want to make sure the main intake vent isn’t obstructed by papers or other items. We’ll come back to the ZBOX’s cooling a bit later, as it leads to one of the system’s very few downsides.

The ZBOX is a relatively low-powered PC, which should come as no surprise given the price and specifications. But the inclusion of an SSD allows it to perform like no other PC ever has in this price range. It took just 14 seconds to boot up (from the press of the power button to a usable Windows cursor), 5.5 seconds to shut down, and just 4 seconds to wake from sleep. These are pretty good metrics for any PC, let alone one as inexpensive as the ZBOX. As one would expect, the power use is also incredibly low; we found that it used 9 watts sitting idle at the desktop, and just 18 watts under 3DMark’s Fire Strike combined test, an intense load that taxed both the CPU and built-in video processor. What all this means is that the system will never get particularly hot, and its slim laptop-style power supply should have no trouble keeping it up and running for a long time to come. That being said, we were a little disappointed in the noise characteristics of the ZBOX. Its ultra-slim profile necessitated a very small, high RPM fan to keep its CPU cool. We found that at idle in a silent testing environment, the ZBOX produced a sound level of 32dB. Under intense load, it increased to 36dB, measured six inches in front of the case. That’s relatively noticeable, and certainly no quieter than a typical office PC. If anything, it’s a bit louder, a trade-off for the slim design, unfortunately.

The results fall almost exactly in line with how we’d expect a 1.4GHz Haswell processor to perform – there’s no funny business here that would curtail its performance. Take a close look at the Graphics Score and Physics Score shown in the graph below. These tests isolate the built-in video and computational abilities of the CPU, respectively. What we see is that in terms of graphics ability, the Celeron is simply astonishing, nearly matching the Pentium despite much lower power use (the Pentium-based system used over 40W in this test, versus the ZBOX’s 18W). And both of these systems were ahead of the expensive but older Core i3. On the other hand, in computational tasks, illustrated by the Physics Score, the 1.4GHz Celeron trails far behind the 3.2GHz Pentium, by a delta that is exactly the difference in their clock speeds: the Pentium is 2.3x faster both on paper and in practice. And the older Core i3 gets well ahead of both newer Haswell dual-cores as a result of its Hyperthreading capability in this test. This performance shortfall also affects the Combined Score, which loads both the CPU and video processor; here the little ZBOX falls to last place as well. In short, Intel has done a fantastic job increasing graphics processing power in its CPUs, while computational abilities remain relatively stagnant and segmented by price class. That being said, we’d argue that with its solid-state drive, excellent graphics capability, and moderate CPU power, the ZBOX strikes an excellent balance in usability for its intended purposes. While some systems provide Pentium-class performance in this price range, without an SSD, they’ll end up feeling slower in everyday tasks. 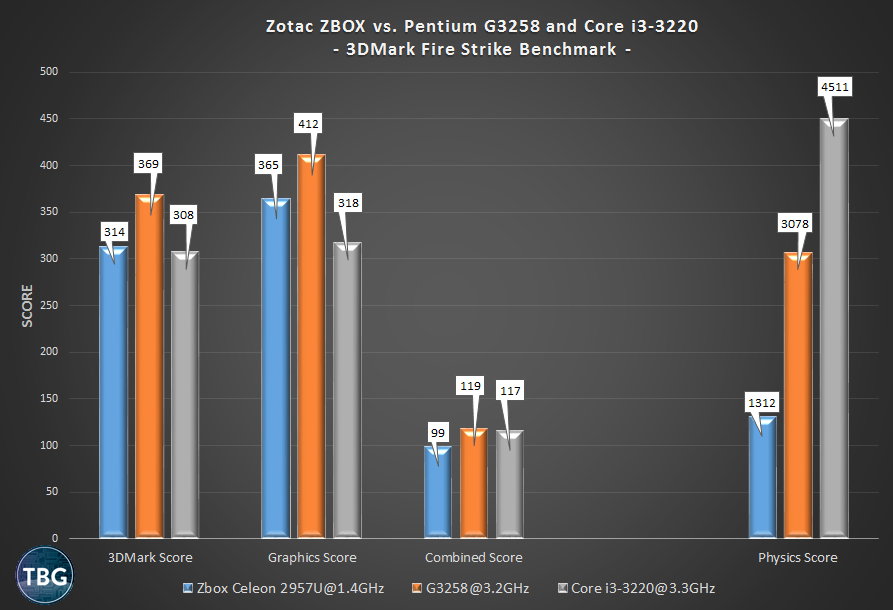 There’s no other way to say this: Zotac simply trumped all its competitors when it equipped a ~$200 desktop PC with both a full copy of Windows 8.1 and a 64GB solid-state drive. As far as we’re concerned, the ZBOX should be one of the very few PCs you even consider if you’re looking for an entry-level desktop. Admittedly, if you only have one PC in your home, you’ll probably need more storage than the ZBOX provides, but in this case, we’d simply recommend adding an external drive like the Western Digital Elements 1TB USB 3.0 Drive and consider yourself the lucky owner of one of the smallest, cheapest, and most capable PCs available under $300. Just make sure to add a USB-based WiFi adapter, like one of the reasonably-priced models from TP-Link, if you need to connect to your home wireless network.