Does the OS Matter? Windows 8.1 versus Windows 10 in Games

Does the OS Matter? Windows 8.1 versus Windows 10 in Games 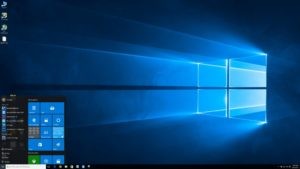 Soon after Windows 8.1 launched, we published an in-depth look at how its gaming performance stacked up against Windows 7. Well that was way back at the beginning of 2014, and it’s amazing how time flies when you’re having fun. Now that Windows 10 has arrived, it’s high time that we pit it against Windows 8.1 to see whether Microsoft has found a way to make games run even better than before. We found that Windows 8.1 offered improvements in a handful of games, but Windows 10 may prove to offer an even bigger boost. Of course, the new OS is packing DirectX 12, which will revolutionize the way graphics routines are run in the latest games, but they have to be developed with DX12 in mind. That rules out just about every game currently on the market. Will Microsoft 10 perform feats of magic in DirectX 11-based games as well? We shall soon see!

We performed our benchmarks on the following test system:

We’ll be providing results for one synthetic benchmark and eight games, as follows:

We intentionally choose games from various genres, as well as a variety of both older and newer games, in order to represent as wide a sub-set of PC gamers as possible. We were also curious whether newer games or older games would benefit more from the new OS, if at all.

All righty, then, hopefully we’ve made clear how we performed our tests. There’s lots of data to go through, but let’s start off easy, with an exploration of our 3DMark results, shall we? 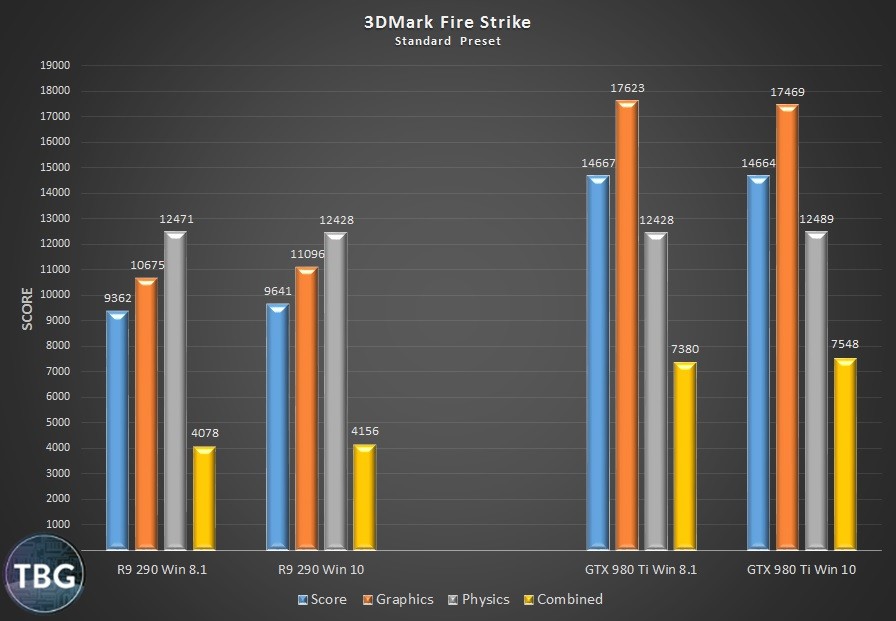 Yes, we know, 3DMark isn’t a game. But it’s a fairly popular benchmark, and it just so happens to have separate Graphics and Physics tests that focus on video card and CPU performance, respectively. And that’s critical here, because we want to know whether Windows 10 improves computational performance, graphics processing performance, both, or neither. Well, right off the bat we can probably rule out any major improvement in CPU performance, as our Physics scores are basically a wash, varying by less than half a percent on our two test cards. How about graphics performance? Well, there’s more to say here, but it’s not a clear-cut result. On the Radeon card, performance jumped nearly 4 percent based on the Graphics Score, while the GeForce card dropped a little less than 1 percent in the move to Windows 10.

If we were to end our evaluation here, we’d conclude that Windows 10 is a great upgrade for Radeon owners and a wash for GeForce owners. But there’s much more that needs to be explored before we can jump to that conclusion. It will be interesting to see whether the delta we observed in 3DMark holds in the many game benchmarks that follow. 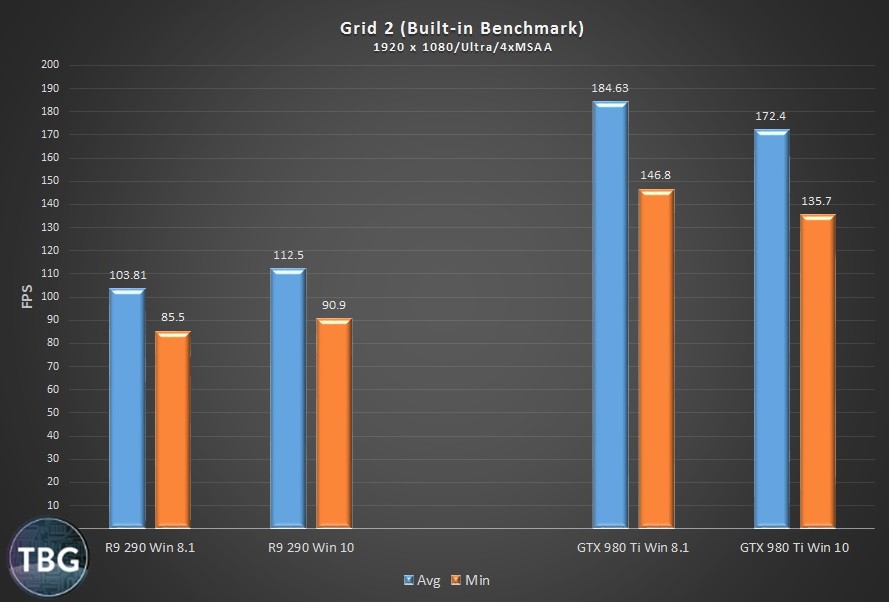 Grid 2 is quite CPU-bottlenecked when pushed to high framerates, even when running at maximum detail settings and 4x MSAA. Obviously, however, more GPU power still provides a boost, so there’s a lot going on in this game to complicate the results. Windows 8.1 actually outperforms Windows 10 on the GeForce card, while taking a back seat to the new OS on the Radeon card. We’ll call this one a split decision and move on. 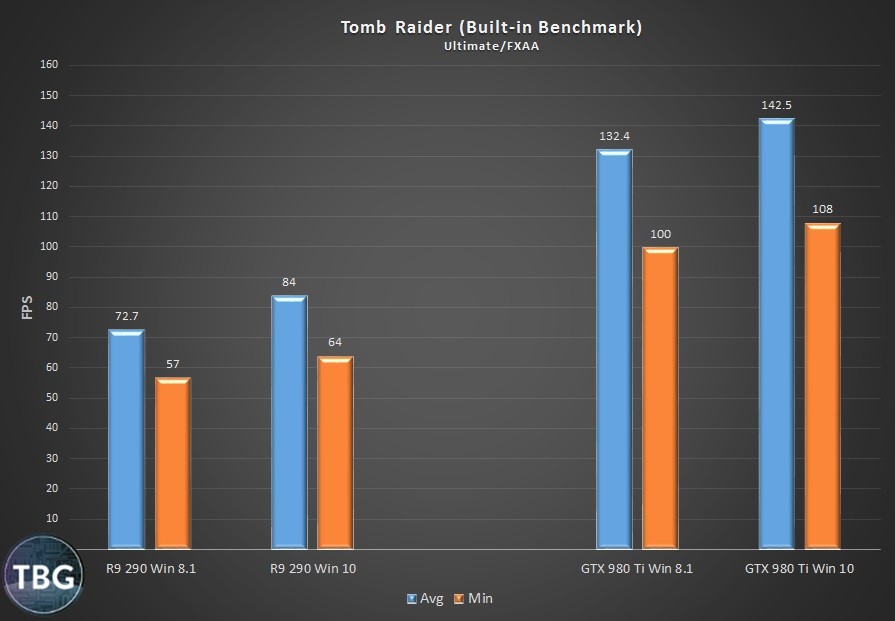 Ah, Tomb Raider. Fun to play, easy to benchmark with. That’s because it is almost a pure GPU benchmark. And this time around we see unambiguous results: Windows 10 trounces Windows 8.1 on both test cards. This is the kind of performance boost you only expect to see when upgrading a video card to a much more powerful model, so it’s a very welcome result indeed. 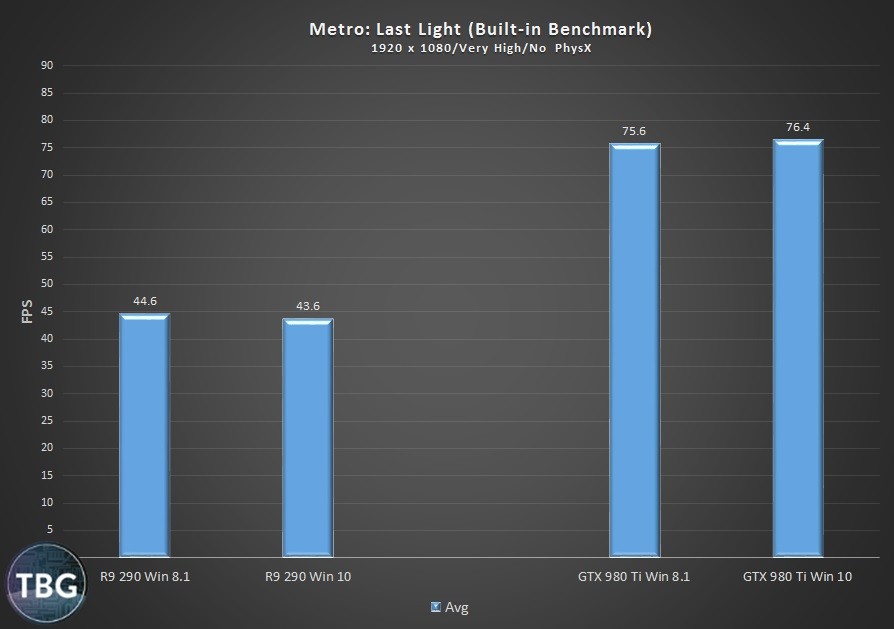 OK, Metro doesn’t offer up very interesting results. First of all, we should mention that because the minimum framerates reported by the built-in benchmark are notoriously inconsistent, we’ve simply excluded them here. And in terms of averages, we get the opposite result that we saw in Grid 2; Windows 10 helps the GeForce card, while slightly hurting the Radeon model. Overall, we’ll have to call this one a draw as well. 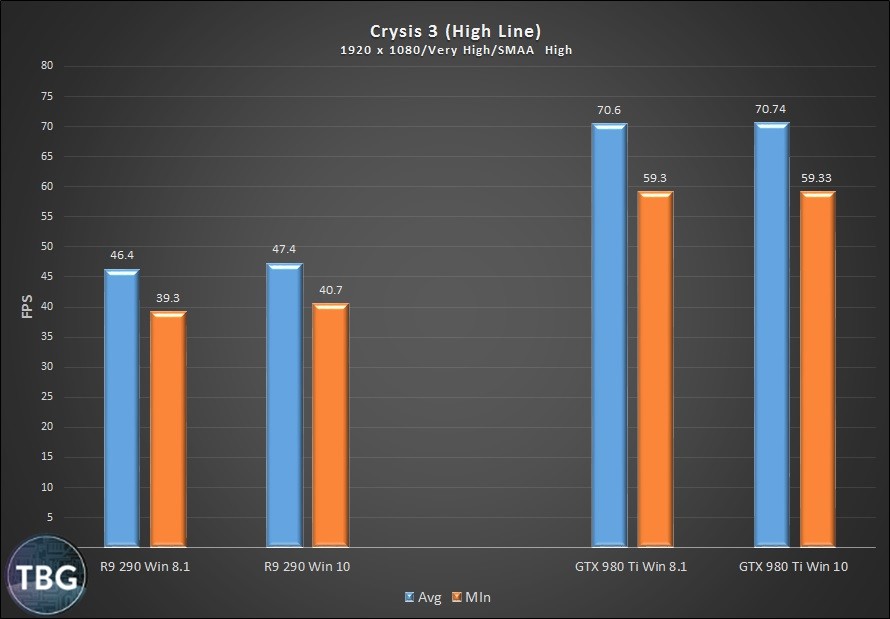 This game is surprisingly demanding when it comes to CPU performance, but it also loves GPU power. What does that mean for its performance under Windows 10? Well, we see barely any movement in the benchmarks, although the Radeon does get about a 2 percent boost. That suggests that the new OS might be unleashing a bit more GPU power in the slower of our two cards, although we’ll still call this one a tie based on the ambiguous results. 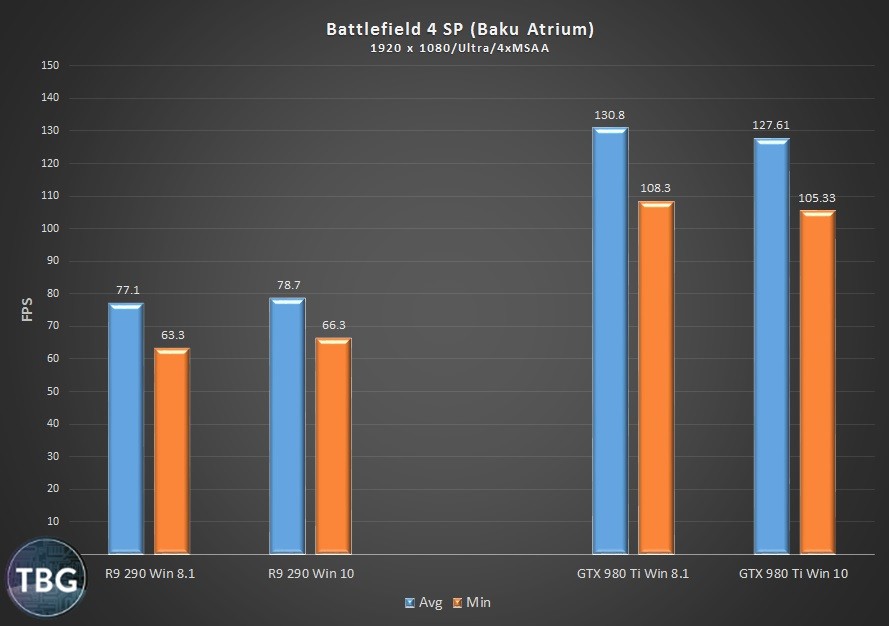 We actually expected Battlefield 4 to improve a lot under Windows 10, as it was one of the few games to perform better under Windows 8.1 versus Windows 7. Alas, it looks like most of the OS-based improvements have already been achieved, as our Radeon card improves by just 2 percent, and our GeForce card actually gives up a bit of performance. Looks like another draw between the two operating systems. 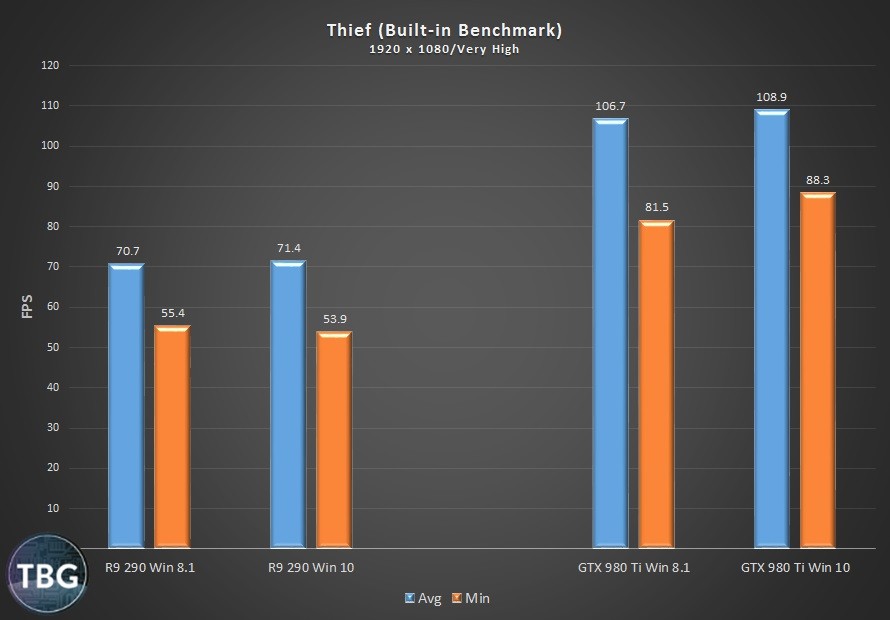 Here’s one of the few games where the GeForce card actually improves more than the Radeon, getting a 2 percent boost to the average framerate and an even bigger boost to minimums. The Radeon nets just a 1 percent improvement in the average and actually gives up some performance in minimums. Overall, we’ll call this one another tie between the two operating systems, although it’s becoming clear that the results are somewhat card-specific. So far, we’ve only seen a big boost on both cards in one game (Tomb Raider), but most of our other games experienced an arguably-significant boost on one card or the other, but not both. 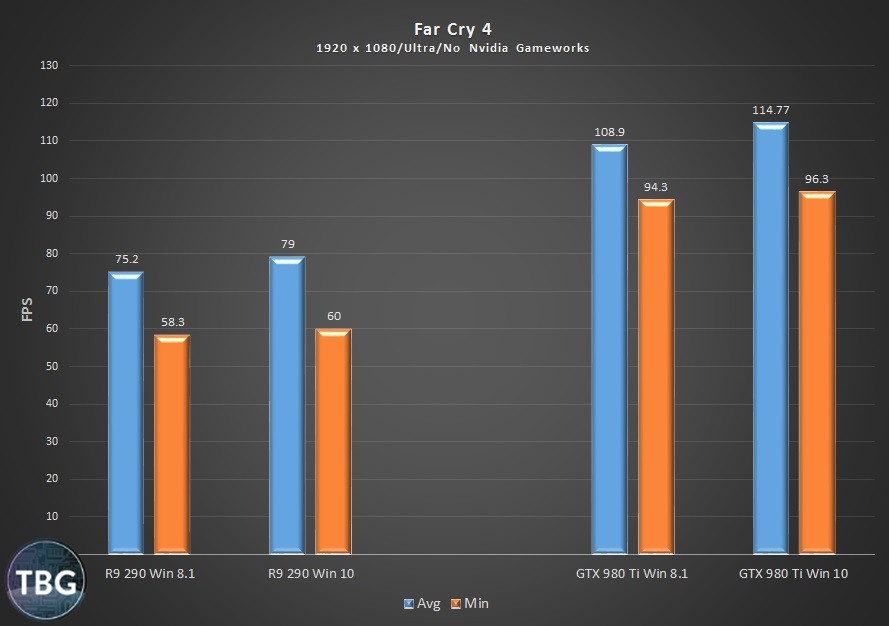 Well, how about that? Another big win for Windows 10. While not quite as striking as the results in Tomb Raider, there’s no doubt that both our cards prefer the newer OS, with both demonstrating a 5 percent boost to average framerates in this game. 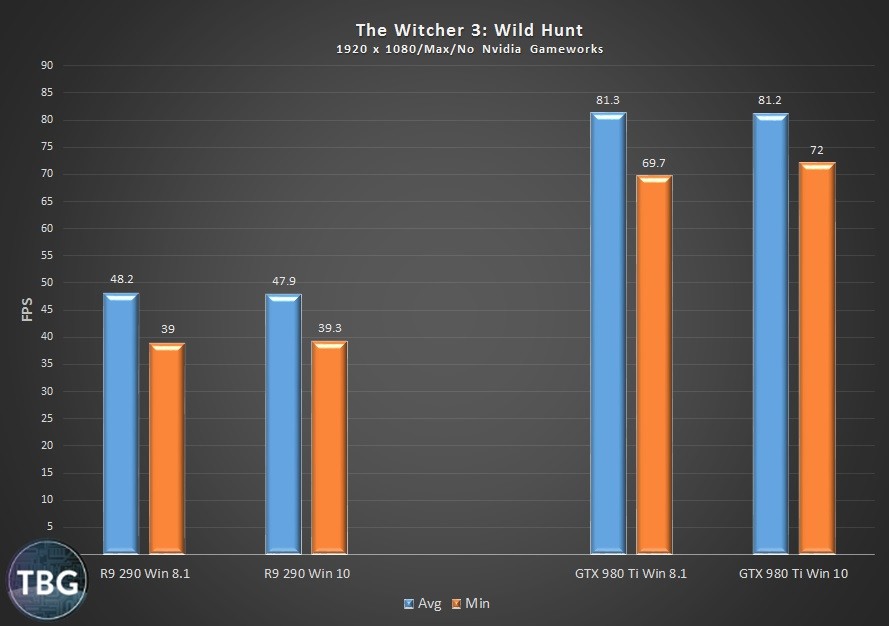 Our last game is the newest game in our test suite, and among the most graphically-demanding. While we had hopes based on our Tomb Raider and Far Cry 4 results that this would translate to a win for Windows 10, it looks like The Witcher 3 wasn’t going to react quite as fondly to the new OS. Indeed, performance was essentially identical comparing both cards on both operating systems.

All right, here’s the final tally: 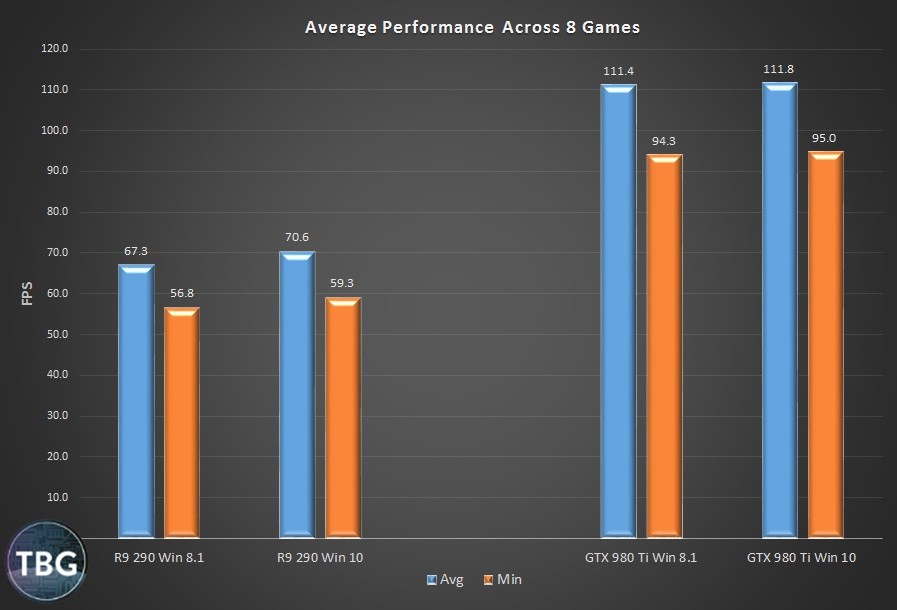 Does Windows 10 perform miracles? Well, not quite, but given that it’s a free upgrade, we don’t recommend that you look a gift horse in the mouth. The older, mid-range Radeon R9 290 gets nearly a 5% boost in performance, which is certainly nothing to sneeze at, while the new ultra-high-end GeForce GTX 980 Ti seems to turn up its nose at the new OS, content to perform exactly as well as it did before. And while some games did turn in slightly lower performance under Windows 10 (particularly on the GTX 980 Ti), this was only with a handful of older games in which its performance was already quite high.

There are a few other angles we can take on the data we collected beyond just averages. First, let’s ask which type of games improved the most: those that are CPU-limited or those that are GPU-limited? The games in our suite that are arguably CPU-limited are Grid 2, Crysis 3, and Battlefield 4. The only improvement we saw under Windows 10 in these games was in Grid 2, and that was on the Radeon card only. So Windows 10 probably isn’t directly reducing the gaming burden on CPUs. How about our most GPU-limited games, Tomb Raider, Metro: Last Light, Far Cry 4, and The Witcher 3. Well, only Tomb Raider and Far Cry 4 demonstrated gains under Windows 10, but they were very significant, with a boost in Tomb Raider of between 8 and 16 percent, and a boost in Far Cry 4 of 5 percent. That at least gives us a clue that when Windows 10 works its magic, it’s improving the efficiency of video card operation.

Another interesting spin on the data is to look at the game benchmarks that we carried over from our earlier exploration of Windows 7 vs. Windows 8.1: Tomb Raider, Crysis 3, and Battlefield 4. In that analysis, we found that Crysis 3 and Battlefield 4 got a slight boost from Windows 8.1, while Tomb Raider stayed put. In our Windows 10 tests, we found that only Tomb Raider received a significant boost. In other words, Microsoft must have taken a different angle in improving OS performance this time around. So much for simple conclusions!

We also want to hypothesize a bit on why the Radeon card benefited so much more than the GeForce card under Windows 10. The most obvious reason might be that the GeForce card is simply more powerful and didn’t need any “extra help” from the operating system to perform at its best. While that’s a tempting explanation, we just don’t think it cuts the mustard. There are a number of games in our test suite that challenge even the mighty GTX 980 Ti, and universal enhanced efficiencies should have helped it in those games as much as the Radeon. Second, it could be that AMD’s 15.6 beta driver used for Win8.1 wasn’t as refined as the 15.7.1 release driver used for Win10. In actuality, these drivers were released just a few weeks apart, and AMD’s beta drivers typically include all the features in later WHQL releases. Ultimately, we think there’s a third more likely reason for the Radeon’s ascent under Windows 10: driver overhead. We’ve known for quite some time that AMD’s drivers require a bit more from the CPU, and that this could potentially reduce performance slightly in games. It’s one of the behind-the-scenes reasons that AMD released its Mantle API in early 2014. Well, Windows 10 probably borrows some of the same refinements to enable more efficient drivers, and DirectX 12 will actually go far beyond that once games start tapping into its power. This should hold even more promise for improving the performance of AMD Radeon cards.

Overall, then, Windows 10 is a winner when it comes to games, and we’d highly recommend that every gamer upgrade to it soon, especially gamers using Radeon graphics cards.