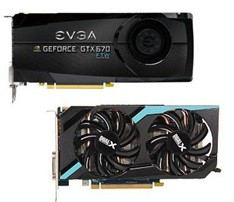 This article explores the effects of overclocking video card random access memory, or VRAM for short. VRAM overclocking may seem to be a bit of a mystery, and for good reason – the VRAM overclocking on modern graphics cards can lead to quite unexpected results, as you’ll soon see!

Whether or not you’ve tried overclocking yourself, you’re probably familiar with the term if you’re shopping for video cards. Overclocking is simply short-hand for manually increasing the operating frequency of a component’s clock speed. There are various components in modern computers that can be overclocked, and the component on video cards that is most frequently overclocked in the graphics processor (or GPU) itself. Today we’re going to look at the benefits of overclocking a video cards video memory (VRAM) – as we increase the VRAM frequency (measured in MHz), the video card’s memory bandwidth increases. The effects of VRAM overclocking are a bit different than those of GPU overclocking, however, so hopefully you’ll find this article informative!

We’ve tested using one popular benchmarking tool (the newly-released 3DMark) and three popular games (Metro 2033, Just Cause 2, and Hitman Absolution). We used two current graphics cards – the GeForce GTX670 and the Radeon HD7870, which both happen to have in common a 256-bit memory bus and 2GB of GDDR5-class VRAM. That means that at the same VRAM frequency, they would have identical memory bandwidth, but in fact they have very different default VRAM frequencies. The GTX670’s reference VRAM frequency is 1500MHz, which is multiplied by four due to the way GDDR5-class VRAM works, leading to an effective frequency of 6000MHz. This is much higher than the HD7870’s reference frequency of 1200MHz (4800MHz). As a result, the HD7870 could theoretically have more to gain from VRAM overclocking.

Both cards have had their maximum stable GPU core overclock applied, so as to avoid the GPU holding back the memory performance as much as possible. For the GTX670 in particular, one must keep an eye on its dynamic “boost” overclocking, which could potentially lower the core overclock as the memory overclock raises the temperature of the video card, throwing off the results. We’ve made sure that the core has stayed at a stable overclock throughout these benchmarks. It just so happens that a 15% GPU overclock was achieved with each card, and to keep things as even as possible, we’ve tested memory overclocks ranging from 0% to 20% with each card.

Note that the cards were tested on two different test benches, meaning the scores aren’t directly comparable, but the goal of this article isn’t to show that the GTX670 is faster than the HD7870 (it is), but rather to show how memory overclocking affects each card. For these purposes, the two test benches are similar enough that they shouldn’t affect the results significantly.

Right off the bat, we see that the VRAM overclock has an overall positive effect, about 4% for the GTX670’s 20% VRAM overclock, and close to 5% for the HD7870’s 20% VRAM overclock. But something unusual is happening with the HD7870. The memory overclock actually has a negative impact at 1300MHz. It is commonly understood that modern GDDR5-type VRAM has an error correction feature that allows a video card to continue operating at reduced performance when the VRAM encounters an error to prevent damage, for example due to an unstable overclock. But the obvious conclusion would that be that the higher the VRAM overclock is pushed, the worse the performance gets, until the error correction simply can no longer compensate and the video card crashes. Well, that’s not what we’re seeing here. The HD7870 clearly is capable of operating at a VRAM clock above 1300MHz, and the results below will further prove this fact.

So, something else is going on with the HD7870 – and it’s something that has been documented with other AMD Radeon models in the HD7000 series. There are two theories as to what could be causing this dip at a certain VRAM speed:

We don’t have the answer for you here, but it’s quite easy to see that whatever is happening with the HD7870, it’s entirely predictable, and in that sense, is probably part of the card’s design.

Update: Thanks to one of our readers, Sam K., we have additional data for you, using dual GTX670 video cards in SLI, run on a similar 3770k-based system: 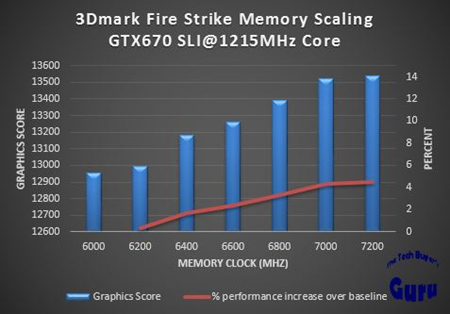 Very similar scaling, at around 5% – interesting, as it would seem that two cards could theoretically be in greater need of memory bandwidth. Apparently, that is not the case, at least in 3DMark Fire Strike.

Next we’ll look at benchmarks in several popular games.

Here we see the exact same pattern with the HD7870 as we did with 3DMark – reduced performance going from a VRAM overclock of 1250MHz to 1300MHz. What’s interesting about this, as we’ll see, is that the performance at 1300MHz is never lower than the performance at the 1200MHz reference VRAM frequency, so the average user might set it at 1300MHz right away and call it a day, never realizing that the card is both performing worse than it would at a lower VRAM overclock.

We don’t have to say much about the HD7870’s dip at 1300MHz here – it’s painfully obvious. What’s more interesting is the dip we see at 1450MHz, which may well be the point at which VRAM error correction is kicking in with this card and this game. That’s why VRAM overclocking can be a bit of a mystery – you may find a setting that works very well with one game only to be less satisfactory in another game.

Overall, VRAM overclocking in Just Cause 2 is on the low side, at about 5% for the GTX670 and 7% for the HD7870. Just Cause 2 also happens to be the highest-performing game of the three tested here, which means it simply may not be presenting the type of memory bandwidth load as the other benchmarks. This could in fact explain why the GTX670’s performance appears to level off at 6600MHz – if error correction were occurring, it would drop off and/or crash, but it appears Just Cause 2 simply cannot take advantage of extra memory bandwidth after a certain point. This may also explain the HD7870’s plateau at 1400MHz.

Our final benchmark is Hitman Absolution, which is the newest game in this test. It takes advantage of all of the latest capabilities of this generation of video cards, and it produces by far the best graphics of the three games here, coming close to the sophistication of the graphics on display in 3DMark Fire Strike technology demo.

Again we see that the HD7870’s performance dips at the 1300MHz memory clock, but picks up again quickly, resulting in a performance increase of over 9% for the 20% overclock. The GTX670 also achieves a nearly 9% improvement, but not at the maximum overclock tested (7200MHz) – rather, it achieves its best result at 6800MHz. The drop off witnessed here is likely error correction kicking in – Hitman is presenting a significant enough load on the graphics card that it should be able to utilize additional memory bandwidth, if the overclock is stable. Apparently, in this game, the overclock that worked for the GTX670 in other games simply isn’t ideal.

And this brings us to an important second lesson: VRAM overclocking can be finicky, particularly with the Radeon HD7000 series. The HD7870 performance actually decreased at a particular VRAM overclock (1300MHz here), only to increase as the overclocked was pushed higher. In addition, on both cards, what appears to be a stable and effective VRAM overclock in one game can result in reduced performance in another. Finally, it appears that to a certain extent, the higher the load that a benchmark puts on a graphics card, the greater are the benefits of VRAM overclocking (and its greater memory bandwidth).

One issue remains on the table – all of these tests were performed at a resolution of 1920×1080, but the higher the resolution, the higher the demand for memory bandwidth. So perhaps we’d find that the benefits of VRAM overclocking increase at higher resolutions, or conversely we might find that with greater bandwidth demands, high memory overclocks might be more likely to lead to error correction and crashes. We’ll have to wait for another day to find out the answers!