Here at TBG, we have a thing for coolers. We’ve tested well over six dozen at this point, of all types, from low-profile to towers to liquid models. In fact, we’ve conducted multiple shootouts for each of these categories, which we believe gives our audience a much better understanding of the market than one-off reviews do. But occasionally we’ll still do a single-product review if we think it will build on a recent shootout, and that brings us to Thermaltake’s new ToughLiquid 360 cooler.

This model was released shortly after our 360mm Liquid Cooler Shootout for 2021, and about six months after we tested and recommended Thermaltake’s new ToughFan 12 radiator fans. Given that the ToughLiquid uses these fans (and basically borrows their name as well), we decided it was worth seeing just how far up the podium the mighty ToughFan 12s could push Thermaltake’s latest offering!

Thanks to Thermaltake for providing a sample of the ToughLiquid 360 for review.

Here’s the test bench we used for our review:

In addition to the ToughLiquid 360, here are the coolers included in our benchmarks:

As with all of our reviews going forward, this review appears exclusively on YouTube, which you can see below. Not only do we provide details on what comes in the box and dive into some benchmarks, but we also show you what the ToughLiquid looks like in action!

The Thermaltake ToughLiquid 360 is most definitely a worthy addition to the high-end AIO liquid cooler marketplace. The performance is excellent, no doubt in large part thanks to the impressive ToughFan 12 radiator fans it uses. They are both powerful and ultra-smooth, with one of the best noise profiles we’ve ever experienced in a PC fan.

The sticking point is the price, and we suspect that this was due to a bad hand dealt to Thermaltake, combining high manufacturing prices with skyrocketing freight costs. The ToughLiquid 360’s MSRP of $190 is at least $30 too high, at least going by historical measures, but we suspect it may become the norm among newer competitors that face the same pricing challenges.

As always, for all of our recommended coolers and fans, check out our CPU Cooler and Fan Buyer’s Guide, updated quarterly to bring you the most up-to-date buying advice! 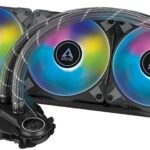