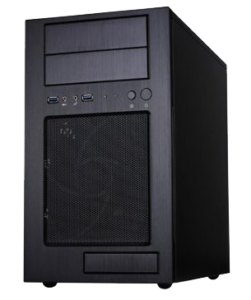 While not the newest compact Micro ATX case on the block, the Silverstone Temjin Series TJ08 Evolution, or TJ08-E for short, still sets the standard by which all other enthusiast-class micro ATX (mATX) cases are judged. This is in part because Silverstone has essentially cornered the market for innovative, space-saving designs. We feature Silverstone prominently in our Build Guides in part because for certain usage scenarios, Silverstone practically has no competition at all. That’s especially true in the mini-ITX market, but the micro ATX market has existed for a long time and has plenty of competitors. This review will look at what makes the TJ08-E special, but also where it may stand to be improved in the next iteration.

Much of what makes Silverstone cases unique are their compact exterior dimensions, and this often leads to an equally unique interior design. This is often very much an exercise in function follows form, as the functioning of Silverstone cases can be anything but straightforward. But that isn’t necessarily a bad thing, because in this case “form” is itself a function. If a case is too large for the space allotted for it, it doesn’t really matter what the function is – the form has failed to allow for the intended function to be utilized. So let’s take a look at the dimensions and capacity of the case on review. 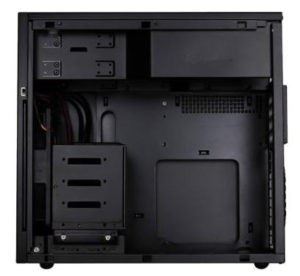 The TJ08-E is 15.2″ deep, 8.27″ wide, and 14.7″ tall, resulting in an exterior volume of 30.2 liters. While not a small form factor (SFF) case by any stretch of the imagination, this is very compact given all the hardware the TJ08-E can hold. It is surpassed in terms of compactness by very few mATX cases, even several years after its introduction, and most of these are other Silverstone cases! To realize just what an achievement those dimensions are, consider that the TJ08-E can accommodate a full-size 180mm power supply, two external 5.25″ drives, five internal 3.5″ drives, a 2.5″ drive, a 165mm high tower-style CPU cooler, and dual 13.25″ video cards. Now, we don’t recommend filling it to capacity, because doing so would in essence fill the case end to end, bringing airflow to a halt. But there certainly isn’t much wasted space in the design – everything has been structured to place a significant amount of componentry as close together as possible. Note in the picture above that the drive caddy is directly in front of the intake fan. That caddy holds four 3.5″ drives, while the fifth spot resides in the permanent 3.5″ bay at the bottom of the case – this can be used for either an 3.5″ external device (like a card reader), or a 3.5″ internal hard drive. Hidden beneath that bay, essentially on the floor of the case, is a mounting location for a 2.5″ drive, such as a solid-state drive. Unlike all the other bays that result in cables pointing towards the back of the case, that drive mount orients the 2.5″ drive laterally, such that the cable connections point towards the side of the case, which makes for very clean cabling.

That’s not where the innovation ends, however. The TJ08-E also uses an aggressively positive airflow design, such that the case will always be actively pulling in more air than it is actively exhausting, based on the assumption that once cool air has entered the case, it will find its way to components requiring cooling and will in the process push existing hot air out. The TJ08-E in fact ships without any exhaust fans installed, and only has space for a single optional 120mm fan rear fan. Silverstone relies on the large 180mm “Penetrator” fan installed at the front intake to handle all the cooling duties. Note that even the power supply compartment, in the upper-rear quadrant of the case, is designed to reinforce this concept – the power supply’s intake fan can only be pointed up, towards the outside of the case, and will not function as an exhaust fan for internal heat.

Silverstone may not provide many fans, but it does provide two excellent fan filters – one magnetic filter covering the power supply’s intake on the top of the case (which does a fantastic job staying in place, by the way), along with a slide out fan filter for the 180mm front fan. These are both made of high-quality mesh, and they really do trap dust, which means they do need to be cleaned, but also means that less dust is entering the case. Some of the less expensive cases we’ve tested that offer “fan filters” really provide nothing more than a punched out metal sheet, which does not actually capture dust – it just blocks airflow. The filters on the TJ08-E actually achieve their intended goal without blocking much airflow. 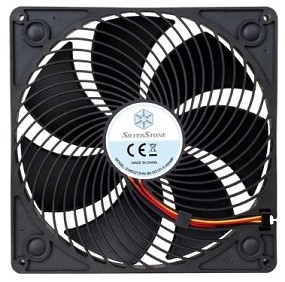 That does not mean everything is ideal with regard to the TJ08-E’s airflow, however. The Silverstone Penetrator 180mm fan has a very significant internal grill, as shown at right. Silverstone claims that this fan was designed specifically as an intake fan, and so its strength is not in airflow, but in directionality. The grill apparently is supposed channel air into a column, moving from the front of the case to the back. We have no way of testing Silverstone’s claims, but what’s obvious is that there just isn’t much air being pushed through this grill. Even at the fan’s maximum speed (around 1200 RPM), the airflow simply isn’t what you’d expect of a fan this size. To make matters worse, at 1200 RPM, this fan is very loud, much louder than a 120mm fan at that speed, even a cheap 120mm fan. Compared to a high-quality 120mm fan using hydraulic bearings, the Penetrator’s noise level at 1200 RPM is not even in the same league. That’s disappointing, but at least Silverstone was thoughtful enough to provide an easy-to-use two-position switch on the right hand side of the case, just above the fan filter. You’ll want to use it, perhaps along with motherboard fan controls, as the Penetrator is audible at anything above about 500 RPM, and above 900 RPM, it’s uncomfortably loud for long-term use. Silverstone also sells a reduced-cost version of the TJ08-E called the Precision PS07, which utilizes twin 120mm front fans in place of the 180mm fan. We haven’t tested that case, but to a certain extent, the use of twin 120mm fans could be superior, not just in terms of the total area dedicated to air intake, but also in terms of replacement with the fans of your choice. The 180mm fan size is proprietary to Silverstone – if you’ll be replacing the fan, it will probably be with another Penetrator. 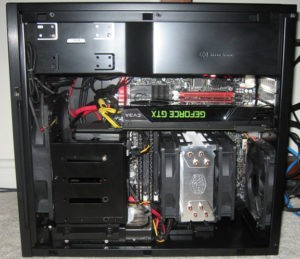 Building a system with the TJ08-E is quite different from doing so in more traditional ATX and mATX cases. the power supply has its own section, with its own set of bolt-on section dividers, which must be removed and then replaced once the power supply is installed. The motherboard tray is removable, and also has a cutout for easy cooler changes. Cables can mostly be tucked away behind the motherboard, and Silverstone in fact includes attachment points for cables to keep things neat. You’ll probably need to take the hint, because there are only a few ways to arrange the cables behind the motherboard that will allow the side panel to be installed.

We first built up the system with the hard drive caddy installed, in part to allow for the installation of additional 3.5″ drives were we to use them, and in part because Silverstone indicates that the caddy helps with airflow. After testing it in this configuration for a while with just a 2.5″ drive mounted in the caddy using a third-party adapter, we removed it. Frankly, there’s just no way it helps with airflow to the video card, which was our main concern – in fact, it blocks most air from reaching the video card. Furthermore, installing drives in the caddy, as opposed to using the hard drive bay at the bottom of the case, really cuts into the space above the motherboard, making RAM removal and other adjustments quite difficult. You can see the case built up without the caddy in the photo below – note how much neater the build is without it. This system still has one 3.5″ hard drive in the multi-purpose 3.5″ bay, and two 2.5″ solid-state drives (one mounted below the hard drive in the dedicated SSD bay, one attached above it via using double-stick tape). 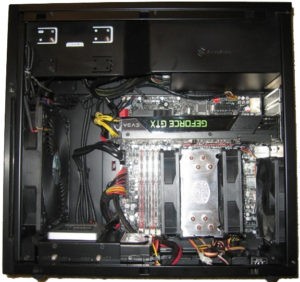 So, what about performance? Well, other than the aforementioned issues with the noise and lack of airflow from the front fan, performance is overall very good. Note, however, that this is truly a case that maximizes CPU cooling, at the expense of GPU cooling. If your main priority is keeping your CPU cool or running a significant CPU overclock, this is the perfect case for it, as the Penetrator fan really is lined up perfectly to provide a significant amount of cool air to the CPU heatsink, and will work particularly well if you use a tower-style heatsink as used in our test system. Note that we installed an optional exhaust fan, not included with the TJ08-E, but depending on the setup, it may not add much to the cooling performance. The dual fans on the CPU cooler here probably aren’t aided much by it, for example.

Video card cooling is another story entirely. In part, this may be due to the video card’s fan (or fans) pointing up, which is the reverse of how they would be oriented in a standard case. Natural convection of air would generally make it easier for the fans to take in large quantities of air from below, rather than above. Another issue is the placement of the Penetrator fan, which may direct air at the shroud of the video card’s cooler, but passes very little air above it. When we tried running a dual-card configuration in this case, both the lower card (the one that was covered by the second card) and the upper card (which would seem to be less affected by being placed in tandem) ran much hotter than a single card, on the order of 15C for the lower card and 10C for the upper card. Frankly, if dual high-end video cards are in your future, this isn’t the case for you, and micro ATX generally probably isn’t the direction you want to go in.

So overall, CPU cooling is great, video card cooling is adequate, the intake fan is too loud, and building in the TJ08-E is a little tricky. Doesn’t sound like a winning recipe, does it? Well, scoring the TJ08-E on standard performance parameters alone is really missing the point. This is a unique case, with excellent build quality and a very refined appearance, and it still allows you to run a carefully-planned high-end setup. That’s the beauty of the TJ08-E, and that’s why it’s ultimately so much more than the sum of its parts.

In case you can’t tell, we’re a bit conflicted on how to score the TJ08-E. Is it perfect? No? Can it beat the cooling or noise performance of larger mATX and ATX cases? No. Are there smaller mATX cases currently available? Yes. So what makes it so great? The answer is that it’s a very elegant solution to a problem that many computer builders have: how to put together a high-performance PC that doesn’t look like a high-performance PC. That, along with its very reasonable price for its quality of construction, makes it an overall winner in our book. For that reason, we award it 4 out of 5 stars.

If you’d like to build your own system using the TJ08-E, have a look at our Compact Micro ATX PC Buyer’s Guide, which provides a parts list that will drop right into this case and provide great performance. The Temjin TJ08-E and its less expensive cousin the PS07 can be purchased from Amazon.