Ultra-compact; amazingly-low price given the features on offer 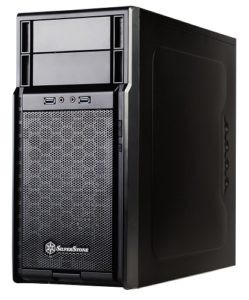 The Silverstone PS08B is an ultra-compact Micro ATX (mATX) case, among the smallest mATX cases on the market. As far as we know, only the much more expensive Silverstone SG10 is smaller by volume, and just barely so. Measuring 6.6″ wide by 14.0″ high by 15.7″ deep, the PS08B is likely the smallest case on the market that can accept a full-size video card, power supply, hard drive, and DVD burner. It really is a marvel of engineering, at a bargain-basement price. The case has a very conservative outward design – we should note that the 5.25″ external bay covers give it a bit of an awkward look, but the case actually looks better with at least one optical drive installed.

As noted, the PS08B’s main claim to fame is its incredibly-small size, along with an incredibly-low price. But it also has some nice features packed in. First is its high-quality (for the price) front 120mm case fan behind a mesh intake filter. The filter is easily removable from the bottom of the front fascia. The case also has dual USB 3.0 ports in front, which is an incredible feature in a case this inexpensive. Most cases below $50 have only USB 2.0 ports up front. The case does not have a rear fan, as Silverstone subscribes to the philosophy that positive pressure cases work the best (i.e., more intake air than exhaust air). A 92mm fan will fit in the back of the case, but that’s about it. There is no ventilation at the top of the case, so upward-mounted exhaust fans are not an option. The last main feature, or claimed feature, is the ability to accept high-end video cards. We’ll get back to that point in a moment…

Assembling the Silverstone PS08B is a bit of an unusual experience. If you know anything about Silverstone cases, you know they are never the easiest to build in. The first challenge was fitting a full-size power supply, hard drive, and DVD burner in, without going down the wrong path. You really have to do it in the right order or you’ll have to back everything out.

Take a close look at the assembled case picture below. You’ll see a full-size (non-modular!) power supply, a full-size optical drive up top, a 3.5″ desktop-class drive in the first hard drive bay from the top, and a 9.5″-long Radeon HD 7870 video card installed. Not quite visible in the picture is a 2.5″ notebook-class drive bolted to the bottom of the case. Bottom-mounted 2.5″ drive mounts are becoming very popular, which is understandable given their simplicity, even if they lack a bit of elegance. 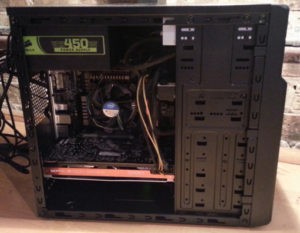 So what were the biggest challenges here? First, you really can’t install the hard drive after you’ve installed the motherboard. It may end up hitting your RAM or the CPU cooler. The second challenge was wedging in that 9.5″-long video card. Notice that the hard drive bays are non-removable. This poses a serious challenge to getting the video card in. While Silverstone claims that the case can hold a 14.1″ video card, in our opinion, there’s no way you’re going to contort that card into the case unless there’s nothing else in it. As it was, we had to turn the HD 7870 on its side, insert it into all the way into the drive bay, then rotate it 90 degrees to line it up with the PCIe slot while backing it into the recessed PCIe slot lock. Good luck doing that with any other expansion cards installed! We’d estimate that the maximum video card length for a remotely reasonable installation process would be about 10 inches. On the other hand, if your video card is under 9 inches long, it will slot right in without any difficulty.

Presenting an unexpected challenge was the fact that the motherboard holes were painted over in black paint after machining, which led to some difficulty getting everything screwed in easily. That’s reasonable at this price point, but uncharacteristic for a Silverstone case.

One word on cooling – Silverstone may be right that positive pressure cases are more effective than negative pressure cases, but our internally-exhausting single-fan HD 7870 struggled mightily to stay cool during long gaming sessions. It doesn’t have a particularly effective cooler to start with, and with no exhaust fan installed by default, some hot air inevitably collects around the video card. Perhaps the biggest issue is that the case is so narrow that the heat is basically caught between the card, the side of the case, and the floor of the case – there’s very little room for it to rise. We’d honestly recommend an externally-exhausting video card for this case if you have the option. As noted, there is an option for a 92mm case fan to be mounted at the rear of the case, but we’d wager that while it might help lower CPU temperatures, it probably wouldn’t do much to improve video card temperatures for the reasons stated above.

There’s just no other way to say this – the Silverstone PS08B is an incredible value, and far and away the very best value in ultra-compact mATX cases on the market today. It has almost no competition, except for several cases from Zalman and Silverstone itself, a few of which we’ll be reviewing soon. If you’re looking to build a full-power mATX case that’s far from full-size, this is the case you want. That being said, the compact design has its drawbacks, both in ease of assembly and in cooling ability, partly because there just isn’t much room in the case for components to be positioned or for air to move. If you’re building an ultra-high-end gaming machine, this probably isn’t the case for you. On the other hand, if you want a conservative-looking case for a home office or moderate gaming system, this case is just a phenomenal pick.

The Silverstone PS08B is available from Amazon for $30 after a $5 rebate, as of our publication date.