Unmatched by its peers in terms of both aesthetic design and premium materials; offers tremendous airflow potential 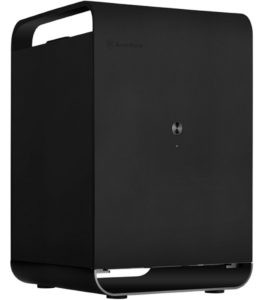 Here at The Tech Buyer’s Guru, we absolutely love to see innovation in the Small Form Factor PC arena. One of the undisputed leaders in this market is and has for a long time been SilverStone, based in Taiwan. SilverStone has virtually created entire market segments with its unique cases, including such pioneering products as the SG05 and RVZ01, both of which created new form factors. SilverStone’s newest entry in the ITX market is the CS01, available from Amazon for $124.99, as of our publication date. The CS01 isn’t exactly cutting edge when it comes to miniaturization; in fact, it goes in another direction SilverStone is well known for: stunning aesthetic design. Following in the footsteps of the FT03 Mini, the CS01 provides an attractive vertical tower design clad in brushed aluminum, with a focus on media streaming duties. The “CS” in the CS01’s name refers to case storage. It’s designed to pack in lots of hard drive storage, but not much else, while looking really, really good in the process.

We’d like to extend a special thank you to Silverstone for providing this review sample.

There are in fact two models of the CS01 – the model shown here, with internal bays for two 2.5″ drives and two 3.5″ drives, as well as the CS01-HS, which has two internal 2.5″ bays and six external hot-swappable 2.5″ bays. SilverStone informed us that the CS01-HS was originally the only model planned, but we’d say that with Seagate’s 2TB drive being the largest available 2.5″ drive, and Seagate’s 8TB drive being the largest available 3.5″ drives, for true ultra-high-definition media streaming, the CS01 makes a lot more sense. You can pack a total of 20TB of storage into it, while the CS01-HS can only serve up 16TB over far more drives. That being said, a few compromises had to be made in the effort to convert the CS01-HS to a standard case with internal bays, which we’ll discuss in the performance section on the next page. The first you can see in the promotional photo above: a simple mesh panel has been placed on the opening where the hot swap bays would be. If Silverstone had been really creative in the conversion, it would have placed another mesh panel between the upper loops of the case, neatly tidying up the cable output area, which, as you’ll see in the photo shown later on this page, can really mar the looks of an otherwise extraordinarily-sleek case. Maybe it’s not too late… what do you say, SilverStone?

One thing that’s immediately apparent about the CS01 once you see it up close is that it’s simply not that compact. At 12.7″ tall, and 8.3″ in both depth and width, it totals 14.2 liters, or more than the equally attractive and far more capable SilverStone FTZ01. The FTZ01 can fit three 2.5″ drives and one 3.5″ drive, as well as a full-size, dual-slot video card, while the CS01 can only fit a single-slot, low-profile card. In terms of expansion, you are essentially limited to WiFi, RAID, and sound cards, or the handful of ultra-compact video cards that can actually outperform Intel’s and AMD’s built-in video solutions. Which case you prefer ultimately depends on your usage scenario and the space you have available for placing the system, but there’s no doubt that the unique CS01 form factor simply isn’t the most efficient for an ITX system. On the flipside, it does allow for one fan to do the work of many, as the bottom-mounted intake fan forces cool air through the entire main column of the case, in one fell swoop cooling every component contained within. As we’ll discuss more on the next page, however, it does come at the cost of noise.

To put the case to the test, we loaded it up with the following components:

Note that the Core i5-6600K is really far more CPU than you’d need for a system like this, but considering the minimum power rating of most SFX power supplies is around 300W, it’s certainly not going to overwhelm any power supply. You could, however, get into some trouble with cooling a hot-rod CPU in this case, as we’ll discuss on the next page. Alas, this is the CPU we had available for the test, so we figured it was a good enough option even if a dual-core would probably be optimal. Also note that here at TBG, we really don’t use 3.5″ drives for anything but data backup, so we plugged in two of the 2.5″ drives we had on hand to test with: a Samsung SSD and a Seagate SSHD. On cooling duty, we used our ultra-compact Noctua NH-L9x65, which at 65mm tall just slips in under the CS01’s 68mm cooler clearance rating. And while there are more powerful coolers available that are just as low-profile, they typically use a much bigger footprint, which it turns out would be incompatible with the CS01, again something we’ll highlight on the next page. If there’s one thing SilverStone has become expert at, it’s not quite giving all the specifications one would need to pick components not sold by SilverStone. As always, though, TBG is here to help you sort it all out so you too can enjoy using a SilverStone chassis! 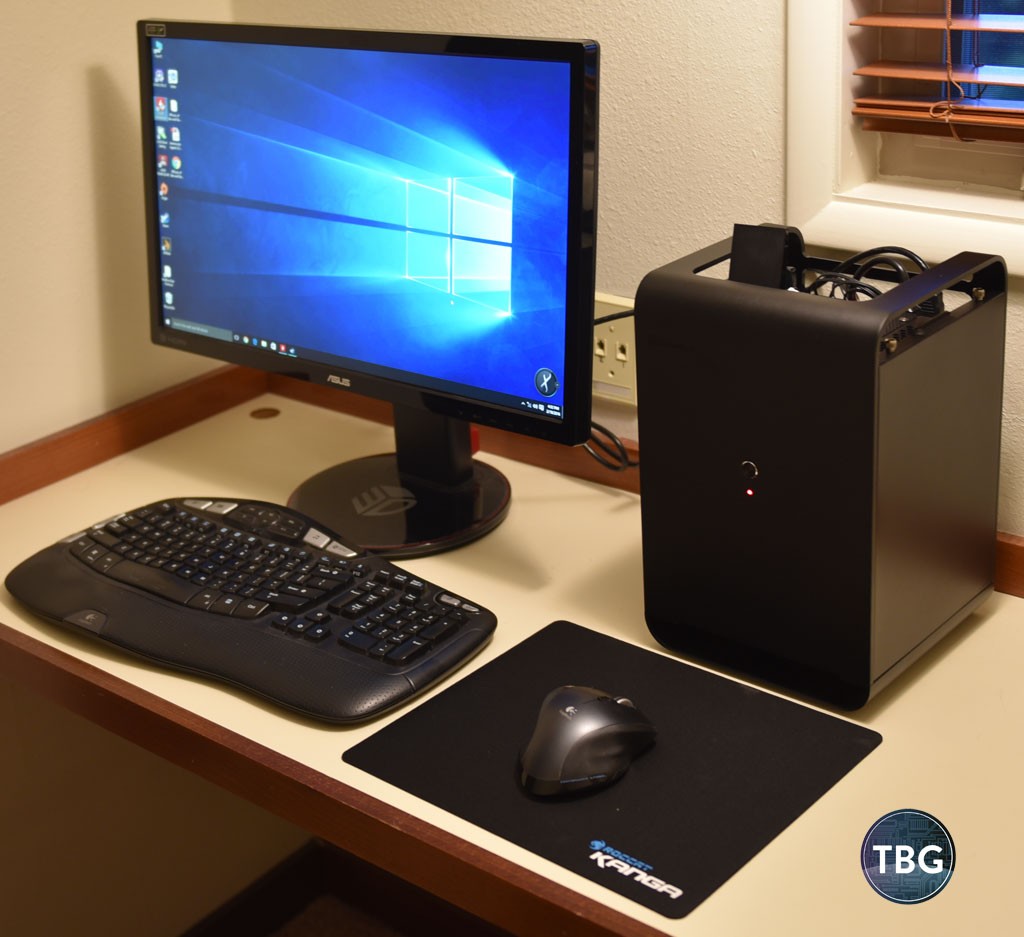 As can been seen above, the CS01 makes for a very sleek system. The brushed aluminum side panels exude class, and the curved air intake area at the bottom adds both function and flair to the design. In fact, we found it was also great for passing a cable through to the back for a high-performance wired mouse, although we photographed the above setup with standard wireless gear. As we noted earlier, we just wish Silverstone would provide an additional cover to hide the mess of cables that protrudes from the inverted motherboard I/O panel. It’s the only thing that keeps this stellar case from reaching design nirvana. 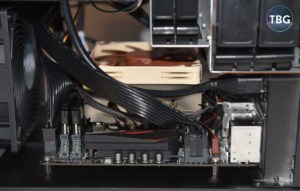 When we refer to performance in case reviews, we mean what a case is like to build in, as well as how it performs in terms of cooling and acoustics. We’ll tackle these two subjects in order.

As with most ITX cases, the CS01 is fairly challenging to build in, and because you cannot remove the top panel, placement of the motherboard is particularly cumbersome. You’ll of course need to mount the CPU, CPU cooler, and preferably RAM before installing the motherboard. Note in the photograph here that the thick internal power cord, which is not removable, gets in the way of CPU cooler clearance. What you can’t see is that the equally-thick and likewise unremovable USB 3.0 port connector does the same thing on the other side of the CPU cooler. In essence, the Noctua NH-L9x65 we used is absolutely the largest CPU cooler you can use with this case. A cooler with a footprint wider than the Intel stock cooler will simply run right into two immovable objects. That’s a recipe for PC building frustration!

Below, you can see another issue we ran into in terms of assembling the system: significant screw hole offsets. In other words, our trusty long-reach Philips #2 magnetic screwdriver was practically useless in affixing the motherboard, as we started stripping screws immediately due to the awkward angle at which we had to hold the screwdriver. You’ll probably want an ultra-short screwdriver to fit inside the case – even something as basic as a utility knife screwdriver would work here in a pinch.

Things unfortunately did not improve much once we moved to power supply installation. Not only was the side panel’s mounting lip physically blocking the screw holes, we also found that the machining of the holes in the power supply bracket did not match up with our SilverStone SX500 PSU. Despite spending a frustrating twenty minutes on this step, we could only get two screws in, and that was with a significant amount of effort. If SilverStone simply machined slightly larger holes into the bracket, this entire issue could be eliminated. Well, actually, it would help to notch out the side panel’s mounting lip to get a screwdriver in there too…we’ve highlighted that problem in the photo here. 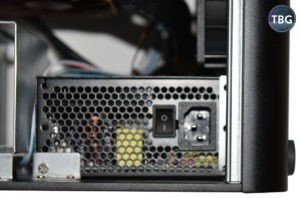 One more piece of bad news before we get to all the good stuff. Upon firing up our system, we were greeted with an absolutely-deafening 51dB roar from the stock 1200RPM SilverStone fan. This is quite literally unacceptable for a case of this caliber unless you plan on storing it in a utility closet, and matched the decibel rating of our overclocked, liquid-cooled, six-core, dual-GPU test bench. Yikes! Turns out that pushing a significant amount of air through an enclosed space with a whole lot of obstructions tends to generate a lot of turbulence. We think the horizontal drive bays, shoe-horned into a system originally designed to use vertical hot-swappable bays, probably contributes to the noise issue. Nonetheless, a fast-moving column of air could easily be felt exiting the top, so clearly air is moving through the case. We’d reckon that the only reason you’d need this much airflow is if you’re running four 7200RPM hard drives 24/7 for use in a dedicated media server or surveillance system.

So now, let’s get to that good news. After selecting a few options in our Asus Z170I motherboard’s Windows fan control suite, we achieved true computing bliss with a stupendous 30dB sound rating. This motherboard serves up a zero-fan function, allowing us to drop the SilverStone fan’s RPM down to a deathly-quiet 0 RPM, and also allowed us to take our Noctua CPU cooler’s fan down to 350RPM. When things got a big hot, the motherboard would spin the SilverStone fan at its minimum controllable speed, 450RPM, which provided a nice rush of cool air without producing an appreciable amount of noise. The CPU temperature hovered around 40 °C, while drive temperatures were below 35 °C. 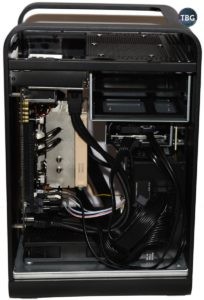 In the end, the most obvious sound emanating from the case was the characteristic tick-tick of our mechanical Seagate hybrid hard drive. With the tremendous advancements in CPU and power supply efficiency, along with motherboard fan controls, mechanical hard drives are now the last remaining contributor to unavoidable noise pollution in a computing environment. Speaking of power supplies, we want to call out the SilverStone SX500-LG for its ability to run in zero-RPM fan mode under all loads that could reasonably be attained in a system like this one. We only wish that SilverStone would offer a similarly-high-end PSU with something closer to 250W at a slightly-reduced price. We’d guess, however, that certain fixed costs make it impossible to scale a high-end unit like this one down to ultra-low-wattage and still sell it at a profit.

In this last photo, you can see that the CS01 has fairly limited interior space, and its unusually large exterior dimensions are a result of its use of upper and lower cooling areas outside of the case, which are both functional and aesthetic. In systems with front-to-back airflow, these areas wouldn’t count against the overall volume of the case, leaving the CS01 at a bit of a disadvantage in the miniaturization wars. But there’s no doubt that a monolithic tower of hidden power looks really, really good sitting on a desk!

Is this case for everyone? Absolutely not, and at a retail price of $125, it’s not exactly a bargain either. But for the discerning PC builder, the CS01 offers a unique and attractive option for home theater, home server, or data archiving use. The premium machined aluminum exterior puts it in a league of its own, and its unique vertical airflow design means it can offer tremendous airflow without looking like typical “high-airflow” cases with their large number of vents and fans.

If you’d like to learn more about all the latest mini-ITX build options, along with other great compact alternatives, check out our Small Form Factor PC Buyer’s Guides.