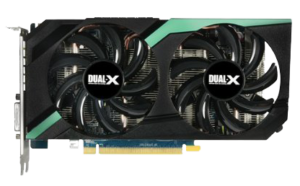 This is a review of the Sapphire Radeon HD7870 OC, based on the AMD Pitcairn architecture.  What makes this card different from a standard HD7870 are two things:

In addition to its 5% factory overclock and its very compact dimensions, this card has another great – the dual-fan cooling system is very quiet and effective. It idles at 32C in an ambient of 22C, with the fans at 20%. At max overclocked gaming load, it got up to 72C and 51% fan. I recommend, however, that a custom fan profile be set to keep the GPU cooler, as there are reports of this card crashing to a black screen, and they seem to be temperature-related.

We found the maximum stable overclocked setting on the card was 1150/1450, up 9.5% on the core and 16% on the memory from the stock overclock of 1050/1250.  The card crashed quickly at 1175MHz core or 1500Mhz memory.  Of note – the Catalyst limits on this card provide a great deal of headroom on the core overclocking, but actually stop at 1450MHz for memory – we used Sapphire Trixx to push beyond 1450MHz on the memory, which led to a failed overclock.

The Sapphire HD7870 OC offers tremendous value, especially with recent price drops and rebates.  It is also currently being offered with an excellent free game package, which includes Tomb Raider and Bioshock Infinite.

[Update: More than two years since we reviewed this card, you can still find a nearly identical model, the Sapphire Radeon R9 270X OC 2GB, for $185 at Amazon. Sometimes, the more things change, the more they stay the same!]