Fit and finish is only average; PSU shroud makes cable routing difficult; styling may not appeal to everyone 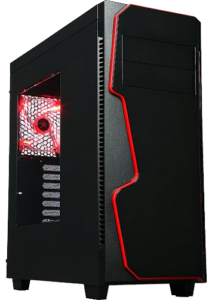 When it comes to building your own PC, one of the most important decisions you can make is what case you’re going to use. While internal components are chosen mostly by price, a case makes a statement. Will you go big and bold, with lots of bright lights, or small and subtle, with a sleek brushed metal finish, or perhaps something in between? Yes, you can select a case based on price alone, but there’s so much  that a case can do to improve your experience that we suggest you think more broadly than that.

And so we arrive at the subject of this review, the new Gungnir ATX case from Rosewill. For many years, Rosewill has been delivering amazing value in its PC cases, power supplies, and accessories, and right from the start, there’s no doubt the Gungnir, named for the weapon wielded by the Norse god Odin, delivers typical Rosewill value. With a market price of around $70 shipped free from Amazon or Newegg, the Gungnir is definitely in the budget category, yet as you’ll see, it packs in a huge list of features you won’t find in other cases in this price range.

We’d like to extend a special thank you to Rosewill for providing this review sample. 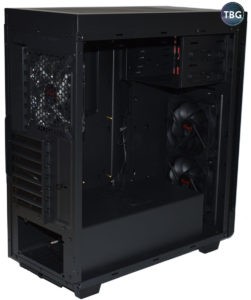 The first thing to realize is that the Gungnir is really quite small for an ATX case. At 18.62″ tall, 8.27″ wide, and 17.32″ deep, the Gungnir is about a quarter-inch larger in every dimension than the ground-breaking NZXT S340, which we previously reviewed. It’s clear to us that Rosewill was aware of the S340 and attempted to borrow many of its cutting-edge features while adding a few extra goodies along the way. And part of the process was no doubt helped by punching out the dimensions ever so slightly in order to allow the user to choose among vastly more hardware configurations. For instance, the Gungnir can fit the biggest CPU cooling towers, a 280mm top-mounted CPU radiator, and dual external 5.25″ external drives (or one with a radiator mounted). It also uses a solid front panel with side vents to provide noise reduction with little loss in airflow. These are all features that the similarly-priced S340 lacks.

That being said, our subjective opinion is that the Norse-inspired front panel is a bit too esoteric to really appeal to a general audience. We believe it’s somehow supposed to look like a spear, but frankly, we just don’t see it. We’re also not totally bowled over by the interior fit and finish, which is just a bit too angular and generic-looking to us. Sure, you have the PSU shroud, which is a cutting-edge feature, but it just doesn’t look as good as other cases, and generally it feels a bit like a “parts bin” case inside. The shroud also makes routing the power supply cables difficult, as we’ll discuss on the next page.

Luckily, Rosewill makes up for these mis-steps with a surprising number of nice features thrown in: three pre-installed 120mm fans (the rear-mounted one featuring red LED lighting), a slick magnetic dust filter on top and snap-on filters in front and on the bottom, four top-mounted USB ports (two being USB 3.0), as well as a three-step fan controller. And unlike many such controllers on more expensive models from Rosewill’s competitors, this isn’t a low-medium-high affair; it’s low-off-high, which we like a lot more. For everyday computing, it’s so nice to be able to simply shut off the fans, which aren’t necessary when not stressing the system. 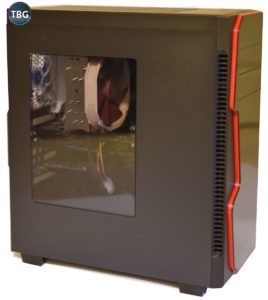 For our assembly and performance evaluation, we installed the following components in the Gungnir:

Note that while the Gungnir can accommodate two 2.5″ drives, two 3.5″ drives, and two 5.25″ external drives, we didn’t include such hardware, as our test system uses an M.2-based SSD that plugs into the motherboard.

We’ve included a photo here of the finished system, which we’d say looks pretty darn good. And we’re particularly impressed that a case this compact can fit our favorite CPU cooler of all time, the 165mm-tall Noctua NH-U14S. The Gungnir earns bonus points for that one! On the next page, we’ll discuss assembly and performance. 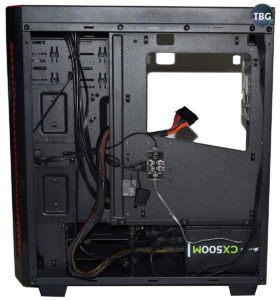 So we hinted at this on the previous page, and now we’ll get right down to it: assembly of the Gungnir isn’t as easy as it could be. While the main compartment is remarkably clear of clutter, once you get behind the motherboard, things get messy quick. To be blunt, that’s the trade-off Rosewill made to give users a clean interior at a low price.

Things start off rough with installation of the power supply. Despite using the smallest modular ATX model on the market, the Corsair CX500M, we still had to work pretty hard to get it jammed into the small space provided. Luckily, we cabled it before we inserted it under the shroud, as otherwise it would be nearly impossible to attach the modular cables. NZXT’s S340 handled this type of arrangement better with a power supply caddy that slid in from the rear of the case. Want to jam a non-modular PSU inside the Gungnir. We wish you good luck!

And while we didn’t use them for this build, the four rear drive caddies (two vertical and two horizontal) are also seriously tight on space. Tucking in all your power and SATA cables in the minimal amount of room provided in the Gungnir would no doubt be a challenge for any builder. Are they “efficient”? Absolutely, and the 3.5″ drive bays even get actively cooled by the 120mm fan pre-installed right in front of them. In the end, this is the direction cases are going – a bit less user-friendly, but nicer to look at and with better airflow once they’re all set up.

By the way, in this photo you can also see the built-in fan controller hub. It’s powered by a single molex adapter (which you’ll need to connect to your power supply), and can control five fans (yes, it looks like it has six headers, but one is for the external fan control switch). By the way, Rosewill pre-wired two of the three fans to the hub, leaving the rear-mounted red LED fan disconnected. We went ahead and connected it to the hub as well, but do note that doing so means that the intensity of the red LED light is also affected, and selecting silent (zero RPM) mode shuts off the LED. That’s probably why Rosewill chose to leave it up to the user to decide how to wire up that fan. 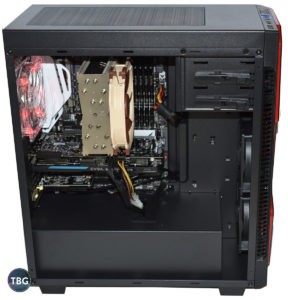 We encountered another minor stumbling block when it came time to install the video card. There’s very little clearance in the rear panel to insert the card, meaning you really have to thread the proverbial needle to get the card in without knocking a couple circuits off your motherboard in the process.

When all was said and done, however, we did indeed end up with a rather sleek looking build, especially considering how inexpensive the Gungnir is. And given how much gear it can fit, we doubt it could be much more optimized than it is – Rosewill really trimmed off all the fat!

While we sometimes provide temperature and noise comparisons in our case reviews, doing so requires the use of identical components. But each case really operates in a specific market based on price and features, and the components you choose should play to its strengths. That’s what TBG does in recommending parts selections in its Do-It-Yourself PC Buyer’s Guides, and that’s what we did for this review.

Being able to fit a high-powered but quiet-running 140mm-based tower-style CPU cooler makes such a difference in a system like this, allowing the user to turn down the rest of the fans via the included fan controller. Indeed, even at full load, this system was whisper-quiet, betrayed only by the slightly rough-sounding bearings in its low-cost fans. Sublime Rosewill Hyperboreas these are not, but given the target market and price, this isn’t too shocking. And the good news is that burying the power supply under a shroud and orienting its intake fan towards the bottom of the case allows the Gungnir to cover up any negative sound characteristics of that component, meaning you don’t necessarily need to go with an ultra-high-end power supply to avoid hearing it.

In the photo below, we’ve lined up the NZXT S340 on the left and the Gungnir on the right. We believe you’ll see how much these two cases have in common right away, but take a closer look and you’ll notice some important differences. First, the S340 has the more “custom” interior, with rounded edges and a cool cable cover painted to match the exterior of the case. The Gungnir, on the other hand, has very straight lines and hard edges, but despite being just slightly larger than the S340, can hold a lot more gear, including two external 5.25″ drives and big 140mm-based CPU coolers (or 280mm-based radiators). That’s a huge advantage from our point of view, and the only real drawback is that you really need to choose your power supply wisely – extra-long models need not apply! 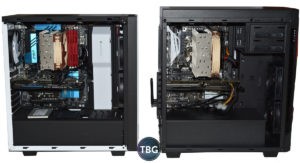 We can’t emphasize this enough – the Gungnir really has an ultra-efficient layout. Sure, the S340 on the left looks cleaner, but that’s because there’s a whole area of the case in the upper-right-hand corner that you simply cannot use. In contrast, Rosewill makes good use of nearly all the space in the Gungnir.

Overall, we were pleasantly surprised by the Gungnir. Odd naming and styling aside, it really offers tremendous value to the PC builder on a budget, and foreshadows what we believe to be a coming trend in PC case design: the move towards much sleeker interior layouts afforded by the use of modular power supplies and tiny solid-state drives. If you still rock a huge hard drive array, the Gungnir isn’t going to work for you, but for everyone else, it represents a fantastic pick in the gaming PC arena.

The Rosewill Gungnir is available for $68 shipped free from Amazon and $65 shipped free from Newegg as of our publication date. For help selecting components for a great mid-range gaming PC to build inside the Gungnir, see our Do-It-Yourself PC Buyer’s Guides, updated monthly!