OCR was accurate but applied to very limited sections of the scanned text, limiting its usefulness 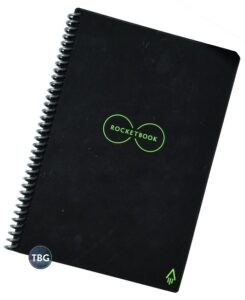 We’re very lucky here at The Tech Buyer’s Guru that after more than six years of writing about and reviewing tech, we are often asked by companies to review their latest products, sometimes in areas of tech that are totally new to us. That’s how we came upon the RocketBook Everlast, an ingenious solution for busy professionals looking to digitize their work meeting and brainstorming notes in an efficient and effective way. Rather than taking a heavy-handed approach, as have so many expensive, complicated tablet companies that have come before it, RocketBook looked to make this as simple and natural as possible, developing a paper-like material that could be written on with a real pen, and then easily scanned via smartphone to an online directory.

As background, the concept of a smart notebook isn’t entirely new to us. About a decade ago, a tech-savvy friend showed us a notebook that used a special digital pen to transcribe notes internally as you wrote them on the page. A concept far ahead of its time, no doubt, but unfortunately it never really caught on, because the heavy lifting required to make a spiral notebook into a handwriting translator just doesn’t pan out in terms of dollars and cents. What RocketBook realized is that most professionals would much rather write normally, using an actual pen, and that meant that the notebook itself didn’t need to be digital. Instead, the heavy lifting is done in the cloud, which makes a ton of sense.

But how does it work? While we’ve reviewed a whole lot of “Smart Home” products, we’ve never reviewed a “Smart Office” product, so this was a first for us. We handed the Everlast over to a busy professional we know (the author’s wife!) to use the Everlast for a month during actual work meetings to see if it could pass the real-life test. Read on to find out how it did!

Thank you to Rocketbook for providing a sample of the Everlast Executive Edition for review. 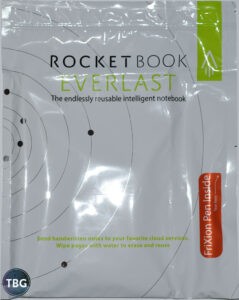 In a nod to getting its users on board as quickly as possible, Rocketbook packages the Everlast into a tear-open bag, not unlike what you might find in a grocery store aisle. But you won’t find any tasty snacks in this bag, just a neat little notebook and an included erasable FriXion pen. The Everlast measures a svelte 9″ x 6.25″ x 0.25″ and just 5 ounces, making it essentially the perfect size for an office notebook. It will slip into just about any work bag, and in fact, will probably fit in most of the accessory pockets of said bags. It really seems like RocketBook’s creators took a good, hard look at what people actually wanted to tote along with them on a daily basis. 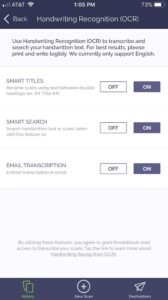 A big part of the Everlast experience is the smartphone app, which is actually what gives the Everlast its smarts. The app uses your smartphone’s camera to scan the device to the cloud, and as far as we can tell, even the app itself does little more than send the document on its way. We took a snapshot of the user interface, shown here, which shows you the various options you can turn on.

We’ll say more about how this all worked on the next page, where we discuss performance. The good news is that the app itself was very fast and never crashed during our usage. It’s a bit odd in that it doesn’t have a “home” page, just history, settings, and the scanner page, but once you get past that issue, it’s simple enough.

The Everlast boasts two “smart” features: first, it can direct your scanned document to one of seven destination applications, or even folders within those applications, which the app identifies using one of seven symbols you check off at the bottom of each page. We used Microsoft OneNote exclusively during our testing, but we found the seven destination limit very limiting, as we had far more than seven current work projects active in OneNote. As a result, we ended up just creating a new folder in OneNote for our scans, and then manually moved the scanned documents to our desired project folder.

So, with that introduction out of the way, let’s get into what the Everlast can do!

On the one hand, the physical experience of using the Everlast was fantastic, with the plastic “paper” functioning quite well as a substitute for real paper, and the FriXion pen sticking to it just as it would real paper. We also really loved the size and shape of the Executive-sized notebook we reviewed. It was extremely portable, exactly what we needed for our workplace meetings. On the other hand, we were just a bit let down by the technological performance of the Everlast. As you can probably tell from the written text in the photo here, we were pretty interested in testing out RocketBook’s optical character recognition (OCR) abilities. While they are definitely impressive, they were also very limited based on our testing. RocketBook instructs you to use a double-hashtag symbol to denote the title of the document, and sure enough, the Everlast software always recognized and translated this title into typed text in OneNote. Unfortunately, that’s where it ended, perhaps due to a bug. We think there’s a lot of power on tap in RocketBook’s servers, but the process didn’t quite work. Let us explain. 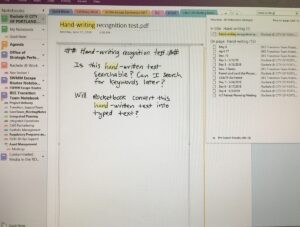 As shown here, when we searched for the term “hand-writing”, the text was clearly found not only in the title, but also within the body of the text (as shown by the highlighted “hand”, which was done by OneNote, not by us). Oddly, words that appeared in the body but not in the title could not be searched, like the words “searchable” and “keywords”. An example is shown below, where we typed the word “searchable” into OneNote’s search box and came up empty handed. This may be a problem with OneNote, or how the file was delivered by RocketBook to OneNote, but in any event, it was a disappointment. One of the best potential features of digitized notes is the ability to search for a concept in pages and pages of notes that you need to find later on. That just wasn’t possible here.

We were also frustrated that the body text wasn’t actually converted to editable typed text. What’s so odd about this is that it clearly did do this for the title text in between the double-hashtags, so the capability is there, and yes, we had all OCR options enabled in the app. Perhaps this was a limitation of how the OCR functioned for us in OneNote, but in any event, it didn’t do everything we had hoped for.

Another minor issue we came across was that the RocketBook app could only identify one subject per scanned page, so when we had a new meeting topic come up mid-page and used the double-hashtag symbols to start a new heading, it wasn’t picked up as a second title. While you can just flip to a new page every time you have a new title, there was a final minor issue that came up that makes this unappealing: the ink takes at least 15 second to dry, and sometimes longer, which meant we got a lot of smudged ink when flipping to a new page immediately after writing.

Overall, the RocketBook Everlast is a brilliant addition to the smart workplace. RocketBook had the good sense to realize that professionals needed a professional solution, not a tech-heavy solution, one that would appeal to people who need to get down to business every time they sit down at a conference table, without fumbling around with their gadgets. Well, it’s as simple as opening up a new page in the RocketBook, taking out your erasable pen, and getting to work. All the “smarts” happen later on, once you’re done with your meeting, and that’s just the way it should be. No batteries to die, no apps to crash, no devices breaking when they drop to the floor. While our Everlast sample might not have met all of our expectations, it was extremely impressive given the low cost and high quality of the product, and we’re betting RocketBook can improve upon the experience and performance as time goes on.

The RocketBook Everlast Executive Edition is available for $28 shipped from Amazon, as of our publication date, making it an exceptional bargain for busy professionals on the go. That’s barely more than the cost of a good spiral notebook and pen, and yet with the Everlast, you get something that’s forever reusable, and comes with a Smart Cloud backing it up. And take note: the Pilot FriXion pens it requires are no more expensive than regular ballpoint pens, coming in at around $2.50/pen as of our latest update. Again, it’s a frugal yet innovative solution, and one we highly recommend!