At least $50 too expensive 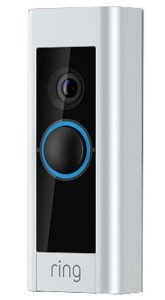 Here at The Tech Buyer’s Guru, we love testing Smart Home gear, but the reality is that most products that fall under the Smart Home umbrella today really aren’t all that smart. This is particularly true in the security camera market, where a seemingly endless number of manufacturers are offering what amounts to the exact same product, over and over.

Luckily, one company stands out from the rest: Ring. It staked its name on doorbells (get it?), but has since expanded into stand-alone security cameras and even alarm systems. With that said, it’s probably still best known for its doorbells, so we decided to have a look at its newest model, the Video Doorbell Pro, to see what it has to offer, and to discuss why you might choose a Ring video doorbell over another Ring video camera product or any of the hundreds of other video cameras available today.

And by the way, Santa Monica-based Ring was successful enough over the past few years to catch the eye of Amazon, which snapped up the company for a cool $1 billion in early 2018, which suggests at least two things: Amazon saw a lot of promise in Ring’s IP, and Ring now has the financial backing to guarantee that it will be around for a long time to come. That’s an important consideration in choosing any Smart Home gear, given the requirement of at least some ongoing cloud-based support.

With that introduction out of the way, let’s move on to the product!

To provide as thorough a review of the Ring Video Doorbell Pro’s description and features, we’ve created the following unboxing and installation video, which will tell you everything you need to know about what the Video Doorbell Pro offers, and more importantly how to actually install it!

Next we’ll give you our impressions of the Ring Video Doorbell Pro in action!

Given how easy the Video Doorbell Pro was to install, you’ll basically forget it’s even there once it’s mounted. No pulling it down to swap batteries, no repositioning it over time (since it’s fixed), no worrying about whether a long extension cord needs to be tucked out of the way on a regular basis. It goes about its job with little fanfare, and does it well. The fisheye view is a little distorted, but that’s a necessary compromise given how low a doorbell needs to be placed. Below is a sample view we captured during installation: 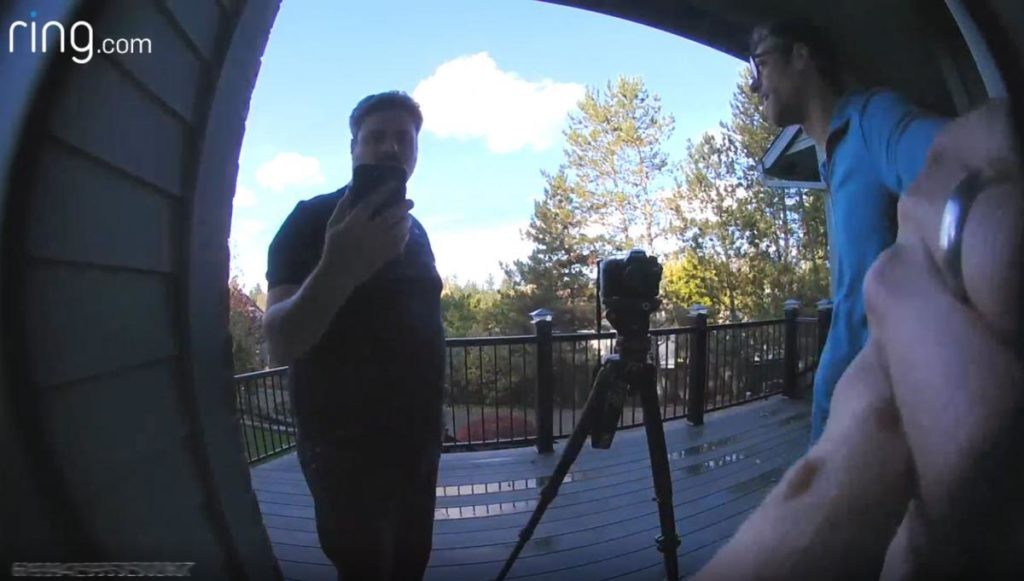 Keep in mind that Ring is not constantly recording video. Instead, motion detection starts the camera’s recording, and also sends a notification to your smartphone (assuming you leave that feature enabled), allowing you to catch a “live view” of the events. You can also view previously-recorded videos, assuming you pay for the subscription service ($3/month or $30/year for a single Ring camera). That’s quite reasonable versus many of Ring’s competitors, but then again a few actually provide a day or two of recording for free, so it’s not class-leading. 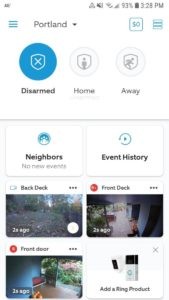 Now, to fully evaluate the Ring Video Doorbell Pro, though, you really have to consider the Ring App as well, given that it’s the product you’ll actually be interfacing with on a daily basis. The good news is that the app is attractive, feature-packed, and is constantly being updated by the Ring development team. Seriously, we don’t know of any other Smart Home app that’s worked on so consistently by its manufacturer. And that’s in part because the app is the product. You see, what Ring was trying to do from the start was to create a community, and that means the app is more than just a way to control your camera, it’s also a way to share video and news, and to view updates from your neighbors regarding crimes or other activity of note. To a certain degree, the value of this is going to be determined by how many of your neighbors use Ring, but given that you don’t even need a Ring product to view and share news on the app, we think it has a lot of potential. In our test area, there are plenty of people posting regularly with videos from their Ring products, with updates from the police, or simply with notes of concern.

The one area where Ring still hasn’t matched the competition is in the speed of its app (it starts quite slowly) and of the time to connect to cameras. While it’s not bad at about 3-4 seconds, we feel that at this point, an instantaneous connection should be achievable, at least with hard-wired products like the Video Doorbell Pro that don’t need to be pulled out of a sleep state to function. It makes “Live View” sound like a bit of a misnomer, and if someone drops off a package and then leaves, it’s quite likely you won’t be able to connect until they’re out of sight (although the recorded video will become available within a few moments of the event). As for the bootup time, this is probably in part of consequence of making it so full-featured. Not only does it include the neighborhood functionality, but it now also controls the Ring Alarm system. In other words, it does a lot, and it’s asking your smartphone to do a lot in turn.

By the way, the Ring Video Doorbell Pro, like all Ring camera products, works well with Amazon’s Echo Show, allowing you to view a live feed with a simple voice command. In fact, Amazon now sells the two products as a bundle deal, knocking $50 off the price. Ring is surely working on expanding its integration with the Amazon Echo ecosystem given that Amazon now owns Ring, so think there’s more to come in this regard in the near future.

Overall, this product definitely impressed us. We were a little concerned that trying to hook it up to our existing doorbell would lead to unforeseen challenges, but everything worked just right. It also looks very sleek, taking up barely any more space on your door frame than a standard doorbell, yet adding a tremendous range of functionality. With that said, we do think you pay for the convenience of tapping into those existing wires. Ring is charging quite a lot for this product given that it doesn’t require (or include) a battery, and it’s hard to see why it should cost so much more than either Ring’s battery-powered doorbells or its battery-powered stand-along cameras. If anything, we think it should cost less since it has no battery or charging system built in. With that said, it’s surprisingly easy to install, looks far better than any other outdoor security camera, and will never leave you worried that your batteries are going dead. In short, it’s a premium product at a premium price, meaning it could be just what you’re looking for in a DIY home security device.

To learn more about setting up your own Smart Home, see our Smart Home Buyer’s Guide, updated on a quarterly basis, for all our favorite Smart Home product picks!