PC Cases and Power Supplies Get Some Style

PC Cases and Power Supplies Get Some Style

By Ari Altman | Published January 8, 2016 | Updated January 22, 2016
We visited some of the biggest case and power supply manufacturers, as well as some of the smallest, and if there was one theme that united all of them, it was brining a new level of style to the boxy PC. And everyone is looking to hit ever-higher efficiencies, with a number of new Platinum- and Titanium-rated models being announced. Due to the number of photos we have to share, we’ve compressed many of them, but simply click on them to get the full-size view. Also note that we’ll be covering Small Form Factor models separately – we have plenty to share in that realm as well! 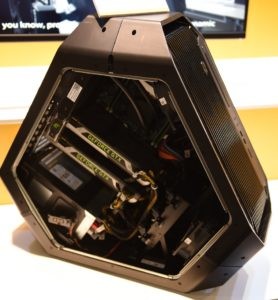 Willing to think way outside of the box with its Alienware brand, Dell has done something quite amazing with its gigantic Area 51. This case is so big that you really have to stand back a few feet to take it all in, and once you do, you realize that Dell has done something very unique here. In order to achieve cooling sufficient to provide a full Dell warranty on an ultra-high-end machine, Dell designed the Area 51 to exhaust heat at nearly a 45-degree angle, ensuring nothing will block its path (like a wall, for instance). While the case also looks wild, we were assured by Dell that this the main impetus for the design was performance. 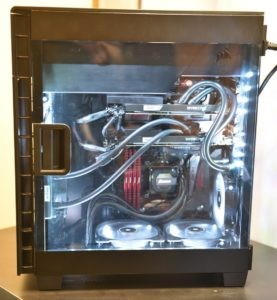 Corsair’s latest ATX cases had actually arrived on the market for a few months prior to CES, but it was good to see the whole range in person. The company is borrowing a page from its competitor Silverstone in offering a model with an inverted motherboard, the Carbide 600C (clear window) and 600Q (for quiet). The 600C is shown here. They’ll go for around $120 [edit: make that $150!].

The cases open on the right side and the CPU is mounted at the bottom. The theory behind this arrangement is that you can achieve better airflow to the CPU when it’s directly in line with the intake fans. It’s a little disorienting to work in such cases if you’ve spent a lot of time with standard ATX cases, but from what we’ve seen the thermals are a bit better, at least for the CPU if not the video cards.

Note that in this orientation, hot air has to be forced out the bottom of the case, in opposition to natural convection, and any heat that does naturally rise will be trapped inside the case, as there are no top-mounted vents other than that used by the power supply. 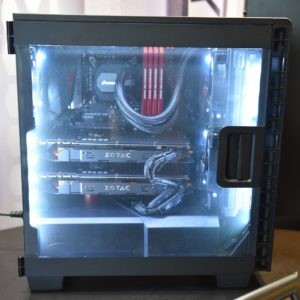 Also on display were two mid-range cases, the attractive $100 Carbide 400C, above, which adopts the stylish hinged door of the much more expensive Graphite 760T, as well as the $80 SPEC-Alpha, shown below. The latter is the first attempt by Corsair to offer a range of colored cases, and they noted that multiple color-band options may be offered down the line, using either white or black as the base color. Corsair expects this case to be especially popular in emerging markets, where consumers like to show a little flair without spending a lot of money. Neither had quite hit the market as of the CES 2016. 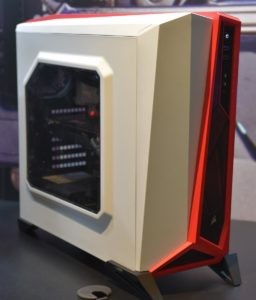 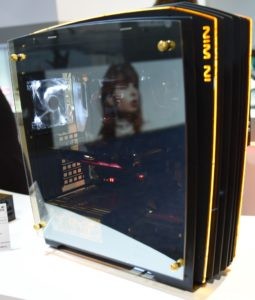 In-Win is a relatively small player in the U.S. case and power supply market, but is clearly willing to take chances both with materials and design. As far as we know, it’s the only manufacturer actually using tempered glass in cases, and it makes for a very stunning aesthetic. We asked Corsair why they don’t adopt some glass in their cases, and they made clear that the potential for shattering during shipment was just too high. In-Win has accounted for this by double boxing all of its tempered glass cases.

Among the most impressive cases on display was the In-Win H-Frame, which uses an open lattice design for incredible airflow, with tempered glass on either side of the case. In-Win has even designed a custom 1065W Gold-rated power supply beyond the ATX size spec to fit nicely into the case without gaps. The unit even has transparent side panels to complete the glass aesthetic. In-Win has set the MSRP of this combo at $800.

The H-Frame would have been any other manufacturer’s showcase release, but In-Win went a whole lot further with its amazing “H-Tower” hinged and motorized transformable case. At the touch of the button, this case actually opens up to show the components inside. It’s most definitely both a display piece and a conversation piece, and we have no doubt In-Win will immediately sell out of all 30 copies it intends to manufacture, despite the $2,400 price tag. Quite simply, it’s the most amazing case ever released by any mainstream manufacturer. 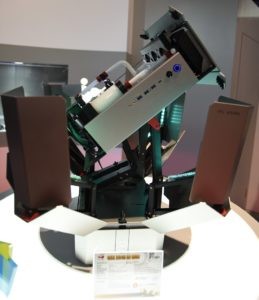 Back down on planet Earth, we find a more mainstream case, the In-Win 909, which is likely going to find a lot of takers. It jettisons all external bays to achieve a sleek monolithic look. The only concern we have about this case is that it has no front-to-back airflow; all air intake comes through a bottom-mounted fan. 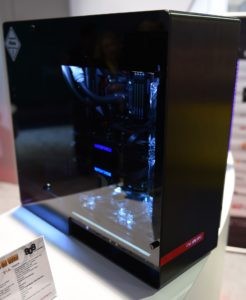 Finally, In-Win showed off some of its custom-designed power supplies, all featuring Platinum ratings, but more importantly, a unique brushed metal finish. In a world of boxy look-alike PSUs, it’s exciting to see a manufacturer carry over a design aesthetic from its cases to its power supplies.

The series is anchored by a 750W fully-modular Platinum unit, which will retail for $150, with higher-capacity units obviously coming in above that. Competing 750W Platinum units are typically $10-$20- less. Clearly, In-Win is counting on builders to pay a slight premium to get these fantastic-looking units into their systems. The brushed-metal finish and rounded edges truly set them apart from any other power supplies on the market. 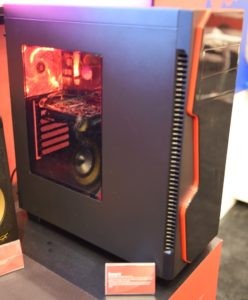 Rosewill, which is a subsidiary of Newegg.com, markets some of the most price-competitive PC cases, power supplies, and accessories on the market. It has long been a popular choice for builders on a budget, but met with less success with its premium Legacy ITX cases last year. 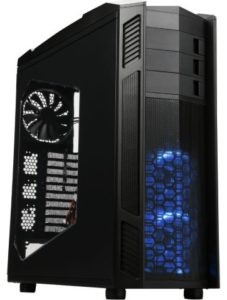 Rosewill has apparently learned its lesson and has returned to pushing the value equation with two of its newest cases, the mid-tower Gungnir (borrowing a name from Norse mythology, like the Rosewill Thor before it). It will retail for $60, which is quite amazing given that it includes four front-mounted USB ports, a fan controller, and stylish red accents. We anticipate that the Gungnir will be a big seller among gamers on a budget, despite the impossible-to-pronounce name.

Featuring a name that’s quite a bit catchier, the Rosewill Nighthawk 117 full-tower case is already available at Amazon for $115 and at Newegg for $110, quite impressive given its long list of features: six top-mounted USB ports, dual fan-control switches, and an absolutely-amazing five pre-installed 140mm fans, the front units sporting blue LED lighting.

Need more space? Rosewill also announced a big bomber of a case, called the B2 Spirit, shown below, which suggests that it must have some “understanding” with Lockheed, the maker of the iconic military aircraft after which these cases are named! 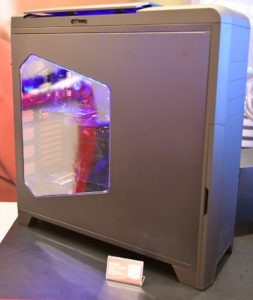 While Silverstone specializes in small form factor cases, it’s perhaps best known for to enthusiasts for its 90-degree rotated Raven. Unlike inverted cases such as Corsair’s 600C, these are designed for one and only one purpose: to have all airflow move in the direction of natural convection. They work best with externally-exhausting video cards, along with standard tower-style air coolers. It’s a bit ironic, then, that Silverstone decided to show off its latest creation with a complex custom liquid cooler arrangement. 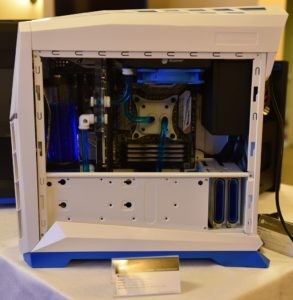 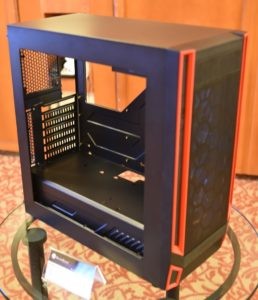 The moderately-priced RVX01 iteration offers new color combinations but doesn’t mess with success. Silverstone informed us that in its testing, CPU temperatures could be reduced by 10 degree C simply by switching from a standard ATX to its Raven case, which is the same reduction one would achieve by switching from a stock to a $100+ liquid CPU cooler. Silverstone has received criticism that this style of case is more difficult to work with, but the company believes enthusiasts who understand the thermal benefits of 90-degree designs will be more than happy to work with them.

Silverstone also showed off its RL-05B mid-range chassis featuring a splash of color along with a single external drive bay to keep dimensions compact. We think this will be a very promising model when it makes it to the market, as there are few modern cases to choose from in the $60 price range that Silverstone is targeting with this model. 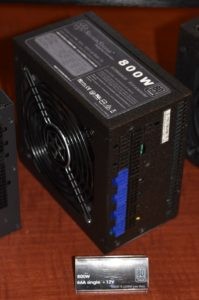 Finally, Silverstone was proud to show off its new line of Platinum-rated ultra-compact ATX units, measuring just 140mm in length, as well as an astounding Titanium-rated 800W unit, shown here, coming in at ultra-compact 150mm. These are all by far the smallest models in their respective classes, and Silverstone is now touting a Watts/liter metric to emphasize just how much power it’s packing into its PSUs.

With more and more builders going with compact but extremely high-powered PCs, there will likely be a huge market for these cutting-edge units. Based on the suggested retail prices we were quoted, however, it’s likely that prospective buyers will have to pay a premium to get them!