Bulky; not the ideal form factor for use with a laptop 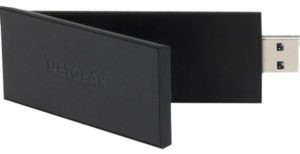 We’ve been running an 802.11ac network for a while, but the only client we’ve trusted to provide true 802.11ac speed thus far has been a wireless bridge. You see, we had a lot of experience with 802.11n USB adapters, and most left us unimpressed. Quite a few have simply under-performed from the start, while others had poor driver support and did not work properly under Windows 8.1. How could moving up to the more taxing 802.11ac standard help the situation? Well, several years have passed since 802.11ac hit the stage, and while a number of half-hearted attempts at an 802.11ac adapter have been introduced over that time, Netgear has finally delivered a robust USB adapter worthy of running an 802.11ac network. In other words, we have a new favorite! 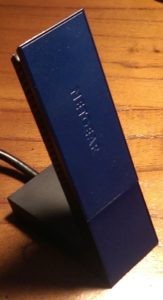 The Netgear A6210 AC1200 WiFi USB 3.0 Adapter is a two-stream 802.11ac device, offering a rated 867Mbps on the 5GHz band and 300MBps on the 2.4GHz band (hence the AC1200 in the official model name). Perhaps living up to its somewhat lengthy name, the A6210 is quite a large device, measuring 3.25″ x 1.25″ x 5/8″, and nearly 6″ fully extended, not including the USB jack. It includes a custom-designed base to allow for desktop use, and the effort that went into creating this slick piece of equipment suggests the reality that Netgear likely had in mind; this is really a USB adapter intended for desktop PCs. While it can be inserted directly into a USB port, on many systems, it actually won’t fit due to its width, at least if you have anything in adjacent ports. Furthermore, it’s so large and heavy that installing it in a laptop is begging for it to be knocked out or to fall out on its own accord. Unless your laptop is sitting firmly on a desk and not moving anywhere, you simply won’t want to use this adapter for laptop networking.

Of course, all is forgiven when you plug the A6210 into its form-fitting cradle, fire up a desktop PC, and realize that it can hit sustained transfer rates of over 25MB/s, or faster than is possible on most USB 2.0 thumb drives. Paired with our Linksys EA 6900 router, we measured the time it took the A6210 to transfer 1GB of JPEG files between two PCs on our network. We acheived 234Mbps, or nearly 30MB/s, meaning it’s faster to transfer files over your intranet using the A6210 than to plug in a USB 2.0-based device and copy it over the old-fashioned way. That also means that the A6210 really does utilize the bandwidth provided by the USB 3.0 standard, and maximum throughput will not be achieved when plugged into a USB 2.0 port. In fact, the A6210 is so fast that it nearly matches the fastest client tested here at The Tech Buyer’s Guru, the Western Digital MyNet AC1300 wireless bridge, which has the benefit of a three-stream, rather than two-stream design, dedicated AC power, and the form factor of a router, not a USB stick. Now before we get too carried away, we should note that transfer rates were not as fast once we got further away from the router, as one would expect. In addition, we actually couldn’t install the A6210 on one of the five test systems we tried it on – a new ultra-small Zotac ZBOX BI320 desktop PC. The installation application could not find the adapter despite it being plugged into a USB 3.0 port. We contacted Netgear about the issue but did not hear back. We’re guessing it was an issue with the desktop, rather than the A6210 application, but it was somewhat unusual.

In the end, the Netgear A6210 is the best laptop wireless adapter that you’ll never want to use in a laptop, or the most elegant desk ornament that happens to warp your desktop PC to wireless lightspeed. To say we like it would be an understatement, but it comes in just under a perfect score because Netgear is marketing this to laptop owners, who are going to be better served by a more compact 802.11n device.

The Netgear A6210 is available for $56.99 shipped from Newegg and Amazon, as of our most recent update.

Special thanks to Netgear and Newegg for providing this review sample.