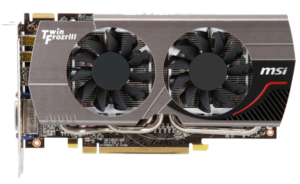 The MSI Radeon HD 7850 2GB OC is a compact, dare we say stylish, midrange video card, first introduced in March 2012 at a pricepoint of $259.99. It’s MSI’s highest-end model of HD 7850 – other models include the non-overclocked version of this design, as well as a more basic single-fan model.

Perhaps it’s evident from the photo that the HD 7850 is a very handsome piece of technology. The brushed metal fan housing of the “Twin Frozr III” cooler has the look of titanium, and the chrome heatpipes below it give the video card an almost automotive appearance. Mounted in the fan housing are twin 80mm fans, relatively compact for an open air cooler, but remarkably effective. While the official specifications of the MSI Radeon HD 7850 indicate that it’s about 7.76″ long, that is in fact not correct. That may well be the length of the printed circuit board, but the card with the cooler installed is actually closer to 8.4″ long. For those looking to fit this card into especially small systems, the true dimensions could be a letdown. Also keep in mind that the PCIe power connector hidden under the housing points towards the front of the card, and thus plugging in a power cable effectively makes the card a bit longer than 8.5″. Overall, this is still quite compact for a video card of this performance class.

The unique features of the MSI Radeon HD 7850 are its cooler and its factory-overclock, with the cooler being the real stand-out feature. We found that the factory overclock of 900MHz on the core (versus 860MHz reference) was sufficient to produce a 3 percent boost in most of our benchmarks. Because that isn’t all that significant, we instead tested at 860MHz and 1000MHz, to show a broader range of performance. It’s the Twin Frozr III cooler that really impressed – at no time during our testing did we even hear it, and the hottest the card ever got, even in unfairly warm ambients of 28C, was 66C, and this was in the system-killing game Crysis 3. Note that while we didn’t formally bench that game, it averaged around 45 frames per second at 1080p, maximum settings, with 1xSMAA, at default clocks.

We thought we’d try something a bit different for this test. As we mentioned above, the default clocks of this card are 900MHz core, 1200MHz memory. While the 900MHz clock is a 4.5 percent increase from reference (860MHz), and is quite a bit more than many manufacturers are willing to do, it still isn’t much of an overclock, producing only a 3 percent performance increase in our testing. Thus, we decided to give the card a bit of a workout, testing it first at default HD 7850 clocks, and then at default HD 7870 clocks. We knew the card could handle it, and we thought it would be interesting for anyone looking for clock-for-clock comparisons. First up – 3DMark Fire Strike, focusing on the Graphics Score: 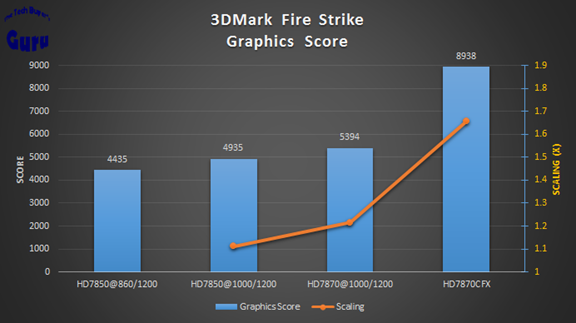 We’ve included a scaling indicator in orange, so that you can see for yourself exactly what the performance difference is for the 16 percent overclock we tested – here it’s 11 percent. This is in line with what we found in previous GPU core overclocking tests – core overclock performance scaling is generally around 2/3 of the clock increase. Notice that the HD 7850 still trails the HD 7870 by about 10 percent when at the same clocks. We added HD 7870 Crossfire benchmarks just for comparison’s sake – obviously that’s a much higher-cost solution. Next up, Battlefield 3 Single-Player: 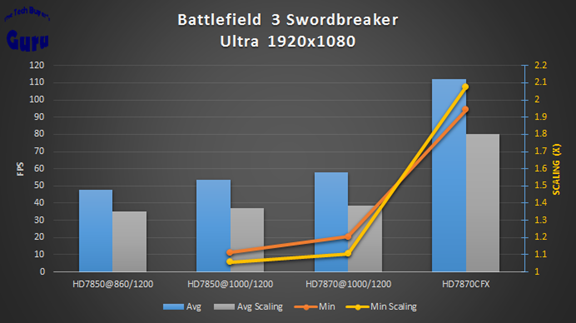 Here we can see about the same pattern. The HD 7850 is more than capable of playing this game at maximum settings even in its reference state, but overclocking to 1000/1200 gives the card a bit more breathing room – again about 11 percent. The HD 7870, however, nearly touches 60fps, which is closer to optimal, and the 7870 Crossfire again runs away from the single cards. Very impressive. Finally, we’ll look at Hitman: Absolution: 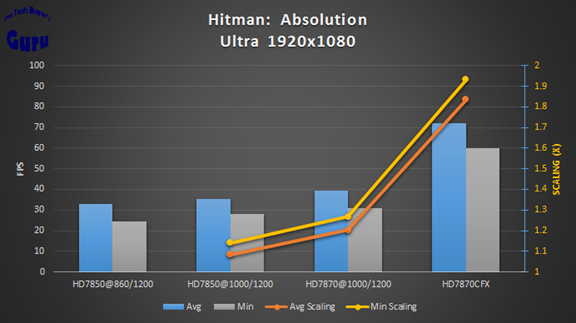 These results are based on a built-in benchmark, rather than an actual run through the game world, as in the Battlefield 3 benchmarks above. The reference-clocked HD 7850 definitely struggles here, and even at the MSI model’s default 900/1000, it only picked up 1fps (not shown). At 1000MHz, however, it inches closer to 40fps, which is an ideal target in this game, and a target the HD 7870 can hit. The HD 7870 is about 10 percent faster than the equally-clocked HD 7850 here, and 20 percent faster than the reference-clocked HD 7850.

So we’ve already shown you some of the performance data we collected at speeds of 1000MHz core/1200MHz memory. But that’s not the limit of this card. In our testing, we easily pushed the card all the way to the Catalyst Control Center limit of 1050/1450, which produced average results nearly 20 percent faster than reference 860/1200 speeds (or 17 percent faster than the shipped clocks), and in fact nearly equaled our HD 7870. Unfortunately, that’s actually where the fun ended, because when we enabled unofficial overclocking using MSI Afterburner (do so with caution – we’ll let you look up how to!), the card could only hit 1075MHz before crashing hard. Given the limited benefit of the extra 25MHz, we’d just call it a day at the Catalyst limits of 1050/1450. Note that despite our best efforts, we could not enable any voltage modification on this card.

And now to dispel one myth – that an overclocked HD 7850 can outrun an HD 7870, let alone an HD 7970. Early in the days of HD 7850 sales, many enthusiasts claimed that the HD 7850 could easily hit 1200MHz and thereby reach the speeds of an HD 7970 (a card that costs twice as much). By our estimation, 1200MHz would require a lot more power than even this circuit board can deliver, and furthermore, based on our scaling results, at least 1125MHz core/1200MHz memory clocks would be required to match a stock-clocked HD 7870 (or 1075/1450, which we did achieve). Catching an HD 7970, which is at least 20 percent faster, would be entirely impossible. So, if you want that kind of speed, you’ll have to pay for it!

At its original price, the MSI Radeon HD 7850 2GB OC was a hard sell versus existing cards like the Radeon HD 6950 and GeForce GTX 560 Ti. But at its current price, it’s a very viable option, although it certainly has competition from the new GeForce GTX 650 Ti Boost 2GB. We think it’s also just a bit too close in price to the HD 7870, so try to catch it on sale. That being said, we think that the MSI Radeon HD 7850 with the Twin Frozr III cooler is just about the best HD 7850 on the market, both because of its good overclocking ability and its excellent cooler, along with its very compact size. While core overclocking was somewhat limited, memory overclocking was above-average, leading to results that would be competitive with most models out there.

The MSI Radeon HD 7850 2GB OC is available from Amazon and Newegg for approximately $150, as of our publication date.