Memory and Gaming: The RAM-VRAM Connection

Memory and Gaming: The RAM-VRAM Connection 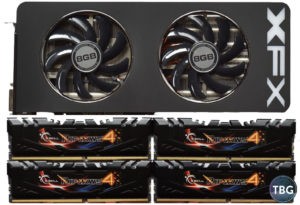 Over the past several years, The Tech Buyer’s Guru has published several articles the effects of RAM and VRAM on game performance. In fact, or very first Gamer’s Bench article explored the effects of VRAM overclocking, and our most recent Gamer’s Bench RAM article looked at the effects of DDR4 RAM speed and quantity on gaming. But there are always more questions to be answered in the collective mind of PC enthusiasts around the world, and TBG is here to bring you those answers! And so we’re here today to explore how system RAM and video card VRAM interact during real-world gaming situations. In particular, we were curious whether having more VRAM would lead to lower or higher system RAM requirements. We’ve often seen cited the recommendation for having twice as much system RAM as VRAM, and that was easy enough when video cards had 512MB or 1GB of VRAM.

We never put much stock in this suggestion; in fact we’d call it the tech equivalent of “an old wives’ tale.” And in the era of 6GB, 8GB, and even 12GB video cards, running a system with twice that amount of system RAM can get really expensive, really fast. But we know a lot of readers still believe failing to stick to this rule of thumb can bring powerful systems to their knees. In fact, we once had a reader challenge us regarding our Supreme Dream Machine Buyer’s Guide, circa late-2015, when we recommended builders go with dual GeForce GTX Titan X 12GB video cards and 16GB of DDR4-3000 system RAM. Wouldn’t this system fail to run games, our reader asked? Of course we knew it would work, but that got us thinking that the lack of accurate information on the Internet regarding this issue was bound to be confusing to more than a handful of PC enthusiasts.

To test as many scenarios as possible, we used a total of five video cards, three using an AMD Radeon GPU and two using an Nvidia GeForce GPU, ranging in VRAM quantity from 2GB to 8GB. Here are the cards we used:

With regard to RAM, we chose the two most common configurations, 2x4GB and 2x8GB, using the following two kits during our testing: 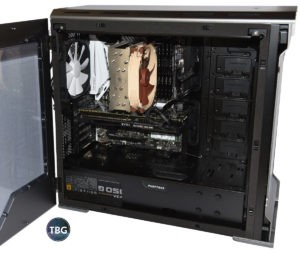 The rest of our benchmarking platform’s specs were as follows:

We ran all tests at a resolution of 2560 x 1440 using maximum settings, except where specified, and all five of our video cards were set to reference speeds. We used a 1440p resolution in order to really push our VRAM, as the more typical 1080p resolution uses far less VRAM.

We’ll be providing results for three games, as follows:

We previously found in our DX12 benchmarking of Rise of the Tomb Raider that it exhibited some very unusual memory usage patterns. We ran it in the DX11 mode for this article, to ensure that any bugs still in the DX12 didn’t distort our results. The other two games also ran in DX11 mode (Mantle was not used in BF4).

We ran a very lean system for each benchmark, keeping open only the applications required to run the games and collect our data. That meant Steam or EA’s Origin to run our games, along with MSI Afterburner for data reporting. To make sure that our benchmarking PC really was using system RAM rather than virtual RAM, we manually set our virtual memory amount to 1GB. Why eliminate the virtual memory pagefile all together? Well, for two reasons, actually: Windows error reporting doesn’t work without a pagefile, and furthermore, many applications fail to run. As it turns out, one of games also needs a significant amount of virtual memory to run in some scenarios, as we found out the hard way!

Remember, this article is about comparing 2GB vs. 4GB vs. 6GB vs. 8GB of VRAM and how they impact system RAM usage, it’s not an AMD vs. Nvidia showdown, nor is it a showdown between 2GB and 4GB cards. You can find such benchmarks elsewhere on the ‘net… we’re staying true to our goals here: a rigorous analysis of the oft-cited recommendation for running twice as much system RAM as VRAM.

Hopefully we’ve made clear how we performed our tests. There’s lots of data to go through, and let’s start off with The Witcher 3 results, shall we? 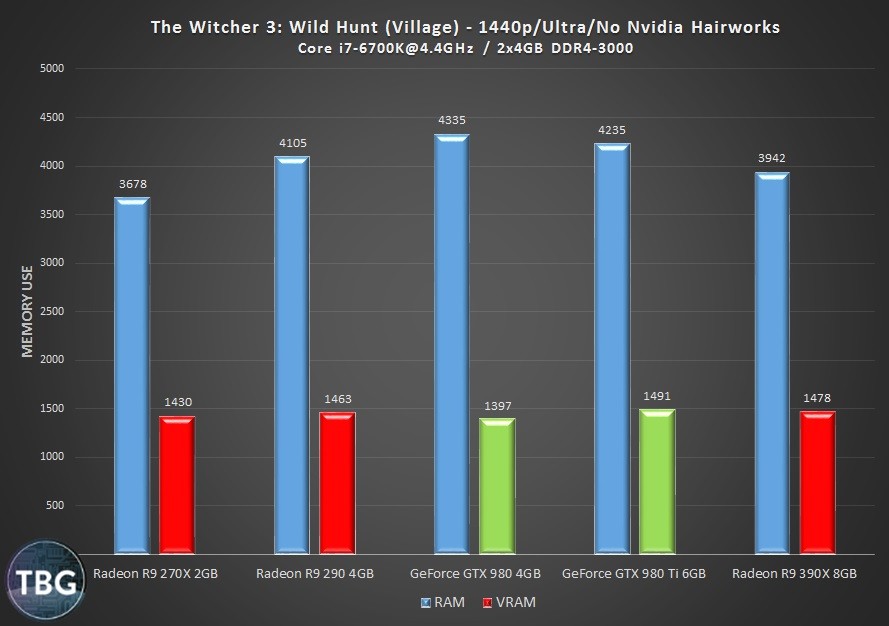 We’ve color-coded the VRAM amounts in our the graphs in case you’d like a quick AMD vs. Nvidia analysis, but remember, this is not an AMD vs. Nvidia test. Yes, as we’ll see, there are some minor differences that can be drawn between how the two brands of GPUs use VRAM, but our focus is on RAM usage here.

And right away, we see what appears to be an increase in RAM usage with VRAM size, but look a bit more closely, and you’ll realize that the Nvidia cards skew those results a bit, as our R9 390X 8GB card actually required less RAM than the R9 290 4GB, while the GTX 980 Ti 6GB used less than the GTX 980 4GB. But yes, the 2GB card used the least, so if you want to view this as potential evidence in favor of running more RAM when using more VRAM, feel free! Whatever the reason for the difference seen here, it has nothing to do with the VRAM in use: all five of our cards are using right around 1400MB of VRAM, which is a testament to both the quality of the game code given its visual fidelity, as well as its optimization on both AMD and Nvidia platforms. 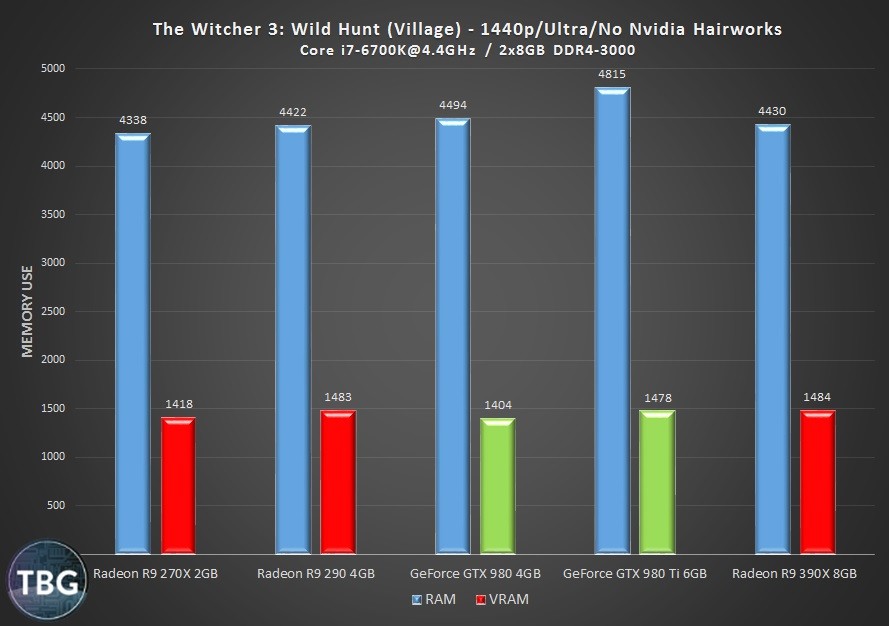 Again, VRAM usage is amazingly consistent across our test cards, averaging around 1450MB, which is interestingly a bit higher than when less system RAM was used. We’ll chalk that up to chance. As for the RAM usage, we again see Nvidia cards using more, but this time the 980 Ti 6GB uses quite a bit more than the 980 4GB. Somewhat perplexing is the fact that the three AMD cards now all use around the same amount of RAM. And in fact more system RAM begets more system RAM usage. Go figure! 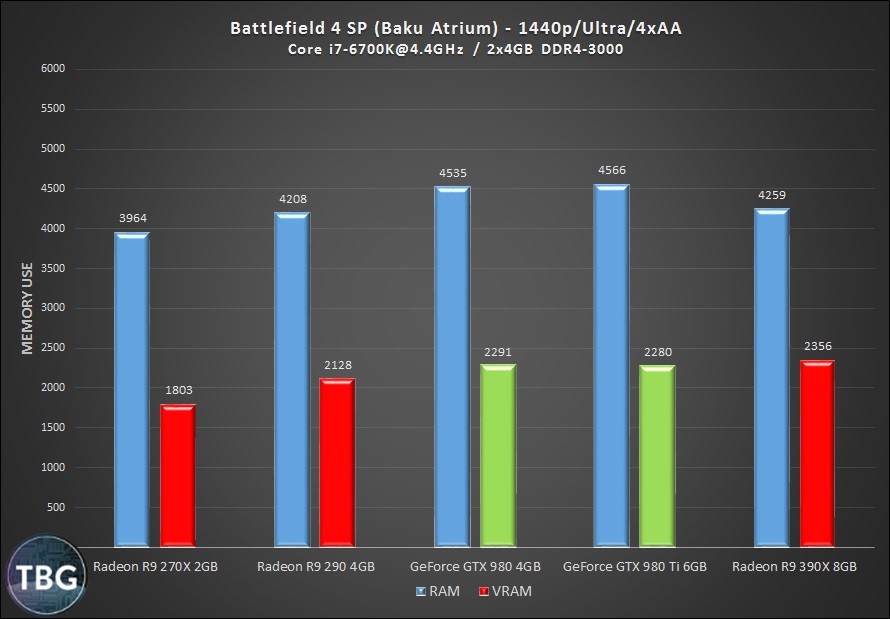 When Battlefield 4 came out in October 2013, it was one of the very first game to actively use more than 2GB of VRAM. Many enthusiasts viewed it as the death knell for 2GB cards, but as it turned out, BF4 was aggressively caching data, and could run perfectly well on cards with just 2GB of VRAM. That being said, if you throw more VRAM at the game, it will use it, as we see that our cards with the largest amount of VRAM also use the most. We also see that unlike The Witcher 3, the Nvidia cards are using more VRAM in this game.

And what about the RAM-VRAM connection? Well, the only thing we see here is that our 2GB card again uses a bit less, while the other cards are all equivalent based on GPU manufacturer. 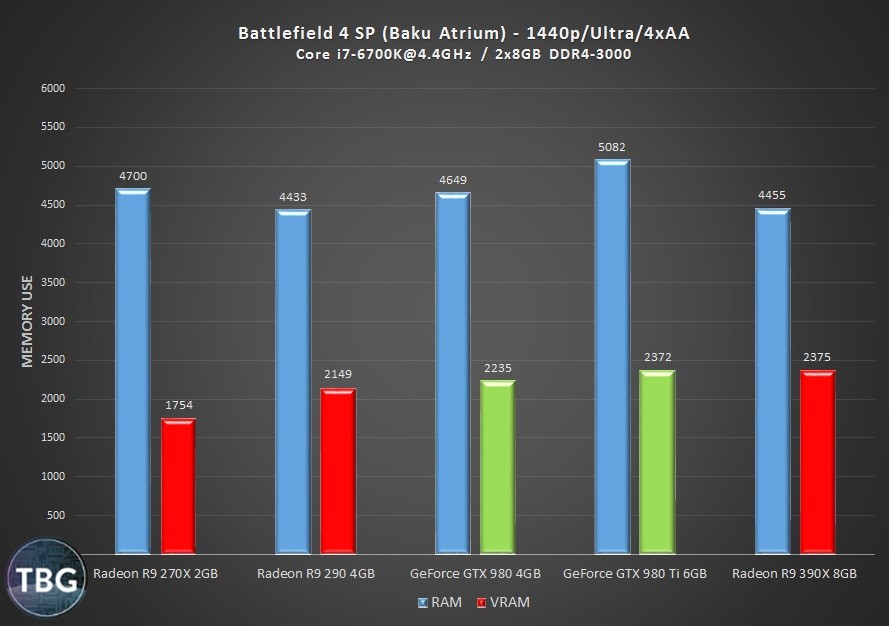 With more system RAM, we again see more RAM being allocated, and this is likely just a Windows caching mechanism, similar to how the game engine intelligently uses more VRAM when available. And this time, our 2GB card uses the second-highest amount of system RAM. Overall, we’d say there’s no pattern of more VRAM requiring more RAM.

Rise of the Tomb Raider – 8GB of System RAM 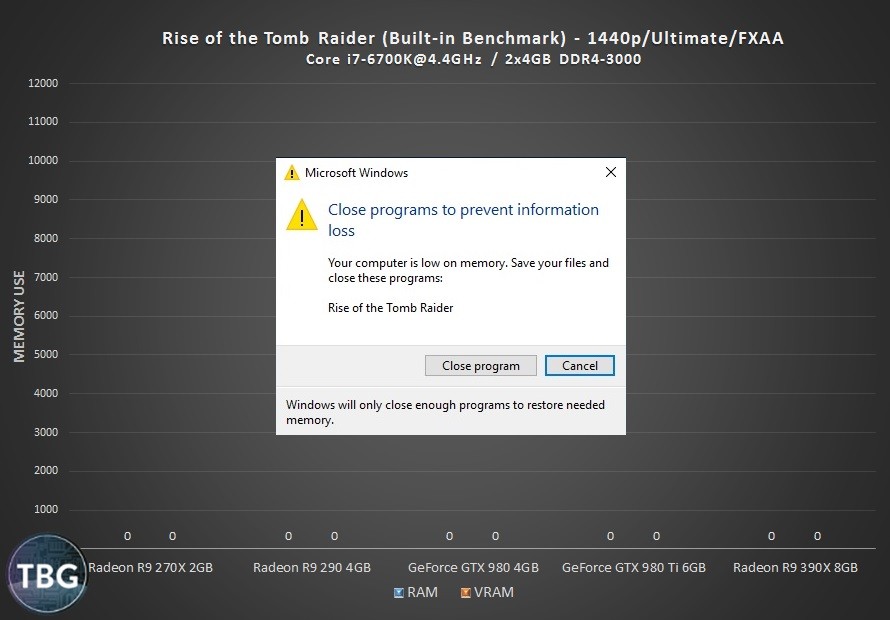 Things were going so well… and then it all came crashing down! The game wouldn’t even run on our test system with 8GB of RAM and a 1GB virtual memory allotment. Indeed, the game crashed as soon as the benchmark drew exceeded a pagefile size of 9100MB, every single time, on every single card. Having more VRAM didn’t help – this game is simply demanding tons of system RAM.

But before you cry havoc and let slip the dogs of war on the game’s developers, keep in mind that the game works perfectly fine if you allow Windows to manage the virtual memory size for you. We found that the game actually required a total pagefile size of about 12GB, meaning that if using a PC equipped with 8GB of system RAM, you must allow the system to use at least 4GB of virtual memory.

Anyway, we weren’t going to change the rules of our testing just for this game, so let’s move on to the 16GB benchmarks.

Rise of the Tomb Raider – 16GB of System RAM 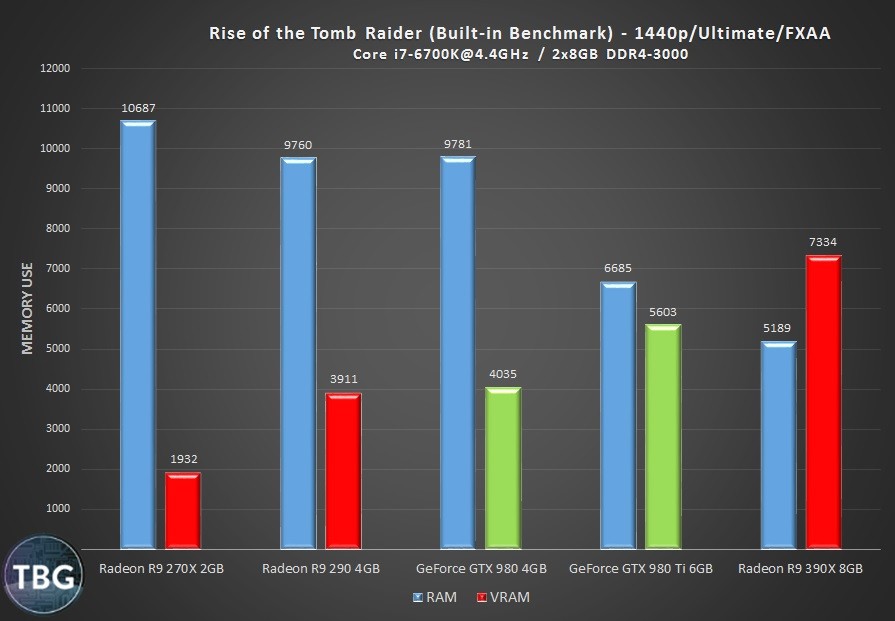 As we noted, we found some interesting memory usage patterns in our DX12 testing of this game, and they ended up being cited quite a bit around the ‘net. Well, turns out it wasn’t DX12, but Rise of the Tomb Raider’s console-derived game engine that was the root cause of this phenomenon. Sure enough, during this round of testing, we again found that the game engine required between 13GB and 14GB of memory, adding up both RAM and VRAM. This is unlike anything we’ve seen on the previous pages, and we’d wager it’s unlike anything seen in the history of PC gaming. Basically, it appears that RoTR is treating PCs as if they’re using the same unified memory architecture as utilized by the Xbox One, on which it was first released.

So much for needing more system RAM when running with more VRAM. In this case, the opposite is true! Our guess is that this game first attempts to load all data in VRAM (as if it were a console system), and then moves to system RAM for overflow data, perhaps caching more than is necessary in an attempt to limit multiple writes to this slower memory bank.

Let’s turn try sum up our disparate results and draw some conclusions about the RAM-VRAM connection!

We thought about averaging our results across our three games, but honestly, the mean would be meaningless, no pun intended, as the results are completely different depending on the game being used. Instead, we’ll do a more qualitative summary.

First, we’ve seen that there is very little evidence that using a video card with more VRAM requires more system RAM. Certainly nothing remotely close to the the 2-to-1 ratio suggested in many enthusiasts forums. That being said, there was a slight tendency for our 2GB card, the R9 270X, to use less system RAM… at least in two of our games (The Witcher 3 and Battlefield 4). In a very strange turn of events, it used the most in Rise of the Tomb Raider, owning to that game’s unique roots as an Xbox One exclusive harnessing the power of unified console memory. Furthermore, when comparing the R9 290 4GB to the R9 390X 8GB, or the GTX 980 4GB to the GTX 980 Ti 6GB, no clear pattern can be seen. If cards with more VRAM actually use more system RAM, the difference is essentially negligible.

Second, a system equipped with an Nvidia card typically uses more system memory than a system with an AMD card, on the order of 5% or so, based on the direct Radeon R9 290 4GB to GeForce GTX 980 4GB comparison. Because we didn’t design our tests to tease out the difference between AMD and Nvidia cards in this regard, we don’t have enough data to draw definitive conclusions on this issue. But honestly, we don’t think this is a big deal, as it would end up affecting performance only in very specific edge cases. Furthermore, note that this finding definitely doesn’t hold true for Rise of the Tomb Raider, which uses an entirely different (and new) approach to memory use.

We hope you’ve found this article helpful. Our findings here, along with all the other data we’ve collected over the years in the Gamer’s Bench, helps us give you, our readers, the very best advice possible when planning your next PC upgrade. If you’re in the market for a new PC, definitely stop by our Do-It-Yourself Buyer’s Guides, updated on a monthly basis with the best-balanced builds at every price point!