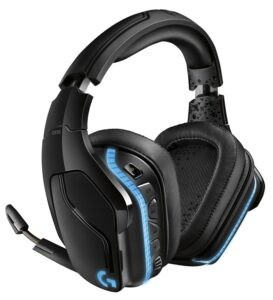 Logitech has been a sleeping giant for the past couple of years, laying low in the gaming peripherals market after staking out huge leads with its G933 Wireless Gaming Headset in 2015, its ground-breaking G403 wireless mouse in 2016, its PowerPlay charging mat in 2017, as well as the first wireless mechanical keyboard, the G613, also in 2017. After a year’s hiatus from big-ticket product releases, Logitech has come out swinging in February 2019 with not one, but four gaming headset releases. In this review, we’re looking at its new “cream-of-the-crop” offering, the G935.

Special thanks to Logitech for providing a sample of the G935 7.1 Wireless Headset for review in time for launch day!

The G935 improves upon the G933 in a number of ways, despite the similar look and similar name. First up are its totally-redesigned 50mm drivers, up from the 40mm drivers in the G933. Also changed is the microphone driver, which gets a bump from 4mm to 6mm and delivers very decent audio. The G933 sounded quite thin in comparison. Finally, there’s DTX Headphone:X 2.0, which is the latest and greatest simulated surround sound mode for headsets. Despite the “2.0” in the name, it’s anything but 2.0 – it’s 7.1 in fact!

To give you a sense of all that the G935 has to offer, we’ve put together a full video review of the headset, which you can see below:

Just a couple of other notes on features not mentioned in the video. First, Logitech has worked very hard to implement a 50mm driver that doesn’t just deliver more bass, but also delivers clean bass. That’s always a challenge, as the more “thump” you have, the greater the chance is for distortion. We found that the G935 did indeed sound very smooth despite the huge boost in range it offers over the previous-gen G933. Another point of interest: the headset offers a 3.5mm analog jack for use with smartphones, tablets, and gaming consoles, and it can even be used on a PC, which will run off of PC power rather than battery power. Just note that as with all analog connections using a 3.5mm audio cable, there is no surround sound implementation nor control via the Logitech desktop app.

The highlights of the G935 are its fantastic audio quality, awesome DTX Headphone:X 2.0 virtual surround implementation, great ergonomics (a physical power switch for the win!), and a very handy flip-to-mute microphone (essential for stress-free use in teleconferencing!). It also has the best RGB effects of any headset on the market, which is saying something given that Logitech’s RGB mice and keyboards doesn’t exactly stand out from the pack!

With that said, there are still a few areas where it could improve. First is weight. It’s heavy, even for a wireless headset – on the order of 2-3 ounces more than its competitors, and sadly even more than the already-portly G933 was. Second, and perhaps more importantly, is battery life: at just 12 hours with the RGB lights off, it’s no better than its predecessor, which has since been surpassed by just about every competitor, leaving the G935 firmly at the back of the pack. We totally get that RGB lighting sucks down the power, but again, this is 12 hours with the lights off – with them on, it drops to 6 hours, which we consider unacceptable. The fact that the G935 is both the heaviest and shortest-lived wireless gaming headset we’ve tested suggests that the weight isn’t going into the battery. At least it has the audio quality and features to account for its heft!

Think of the G935 as the luxury SUV of wireless headsets: it’s not svelte or efficient, but it looks great and will power through anything, thanks to a massive engine and DTS-enhanced 7.1-wheel-drive! Therefore, the G935 will be featured in the next quarterly update to our Speaker/Headset Buyer’s Guide, earning a spot as our top pick for a wireless gaming headset! You can pre-order yours for $169.99 from Amazon – it will ship in late-February 2019.