Sound quality is just average; initial device connection in Windows is harder than it should be 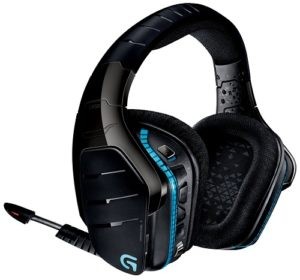 So we’re going to be frank here. Generally speaking, we don’t like headphones. Sure, we use them at the gym, on planes and trains, and maybe once in a while when listening to short clips on our PCs, but the truth is, speakers are more comfortable. Obviously. We don’t like being tied to our PCs, and we don’t like the somewhat claustrophobic feeling that sometimes accompanies wearing headphones. And we don’t like bass thumping in our ears. It just doesn’t feel like a good long-term solution for continuing to use them (our ears, that is).

But we like sound. A lot. And that’s why we’ve been using a set of Logitech Z5300 5.1 Speakers for the longest time, long enough for the model to be forgotten in the annals of PC gaming as one of the best mid-priced surround setups ever created for PC users. We think the advent of compressed MP3s and streaming music had a lot to do with the speaker market dying off, and sure enough, Logitech only has one surround set still for sale, its awesome but monumentally-expensive Z906 kit. That solution isn’t for everyone, so for people who want a high-end user experience in a headset, Logitech has the answer in the G933 Artemis Spectrum Wireless Surround Gaming Headset, and we’ve given it the hands-on treatment to let you in on all its strengths, as well as its handful of weaknesses.

We’d like to extend a special thank you to Logitech for providing this review sample.

First off, the G933 Artemis Spectrum (which we’ll call the G933 from here on out) has a retail price of $199.99, which puts it firmly at the very high end of gaming headsets. In fact, we’re not sure there’s a more expensive headset out there. But there are two things to keep in mind before you dismiss it out of hand as too expensive. First off, like all Logitech products, the G933 has radically dropped in price since its introduction. Logitech likes to hit the market with a somewhat inflated price, perhaps to secure a “premium” market placement, and then allow retailers to discount its products aggressively. Less than four months since its introduction, the G933 has dropped nearly 25% in price. Secondly, this headset really is a cut above just about everything else out there in terms of functionality and comfort, which we’ll discuss more on the next page.

But we’re getting a bit ahead of ourselves here. Let’s go over some of the basics first. The G933 comes in at 12.9oz on our scale, which is simply astoundingly light. It’s actually the very first thing you’ll notice once you pick up this headset. That’s all the more impressive given that the G933 has a wireless receiver and a lithium battery good for 12 hours of listening time built in. The battery can be recharged via micro-USB cable, just like a smartphone, and the headset can either be used wirelessly in combination with its USB dongle (about the size of a large thumb drive), or in wired mode via the included stereo cable (which conveniently includes an in-line mic for use in phone calls). The G933 of course also has a flip-down boom mic, which is one of the best we’ve had the pleasure of using. It really does fold right into the body of the headset, disappearing when not in use, and can be dropped down and extended when the time comes to use the mic during a gaming or chat session.

Another major feature on the spec list is what makes the G933 part of Logitech’s “Spectrum” line of gaming peripherals: RGB lighting. Now, we think the RGB craze will likely be short-lived, but right now every gaming accessory has to sport some lighting, and at least the G933 does a pretty good job of integrating some cool effects. We really like the light band that Logitech has integrated, although it’s a bit odd that it’s only on the back of the headset. And that begs the question, what good is lighting that the user will never see? Maybe it’s really all about making the wearer look cool during LAN gaming sessions or e-sports tournaments… we’ll leave that up to you to decide!

Logitech has also licensed two surround sound codecs: Dolby Headphone and DTS Headphone X. We found the two to sound identical, but for fans of one or the other, the choice is there. Note that we’re talking about virtual surround processing here, given that the headset has just one 40mm driver per earcup, and that means it requires Logitech’s Gaming Software to function. Surround effects are thus limited to PC users, but at least Logitech’s software is first rate. In fact, it’s by far our favorite among all the major gaming peripherals suites on the market. You can see a shot of it below, along with the G933 lit up in one of its millions of possible colors. 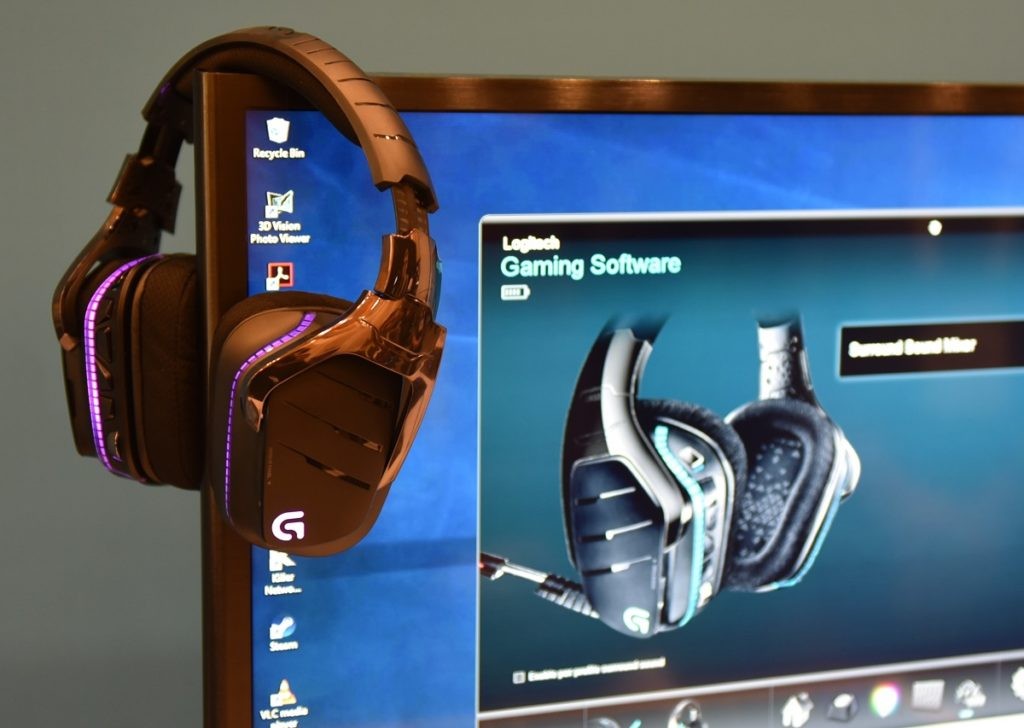 One last feature we’ll mention, also visible in the photo above, are the programmable “G” keys on the left rear of the headset. You have four keys, along with a rotary volume knob (our favorite kind!) and a sliding on/off switch (infinitely better than a push button for telling you whether it’s on or off!). You can assign functions such as stop/start and forward/back for use with music tracks, or alternatively for push-to-talk functionality. We didn’t make use of these keys in our testing, but they are definitely a unique add-on that the G933 offers versus the competition. 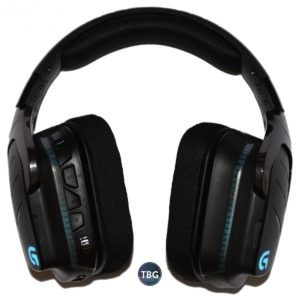 There are just two pieces of bad news when it comes to performance, and we’re going to get them out of the way first, and then tell you all about why we absolutely love this headset anyway. First of all, initial connection can be a bit dodgy, as Windows doesn’t always recognize that you’ve turned your the G933 on, despite the Logitech software recognizing that the USB receiver is in place. And this wasn’t just something we encountered; when Logitech’s representatives first demoed the G933 to us at CES 2016 back in January, they had the very same problem. We think part of the problem is switching between different sound devices (in our case, that means the G933 and our Logitech 5.1 speaker set). Going into the Windows Sound control panel and manually selecting the G933 as default always worked, but we wish it would auto-switch without user intervention as soon as it’s turned on.

The second area of performance that isn’t quite what you might expect given the price is the sound reproduction. And yes, that seems to be job #1 for any headset. But we’d argue that the balance Logitech has struck with its 40mm drivers and the 12-hour battery life is a good one. Sure, you’ll get fuller sound from a wired set with 50mm or larger drivers, but you know what, it’s not going to be wireless, or it’s not going to have great battery life. Furthermore, Logitech makes up for a lot of that with the great surround processing, which really did make a difference in providing position information in a fast-paced gaming environment. Overall, there’s certainly a trade-off being made here in terms of really deep bass, but it’s one we’re happy to accept. Why? Allow us to recount the ways!

From our point of view, performance of a wireless headset can be broken down into four categories: sound reproduction, microphone clarity, wireless fidelity, and comfort. We’ve already told you that the sound on these is just average, particularly given the price. But in every other aspect, the G933 is simply at the top of its game. We found the microphone was incredibly easy to use, never felt clunky in use (unlike so many competitors’ offerings), and reproduced our voice perfectly during gaming. No snaps, crackles, or pops!

Then there’s wireless fidelity. We were literally able to continue conversing on this headset from one story above our PC, which is simply mind-blowing. Try doing that with a Bluetooth headset and you’ll be in for a boatload of disappointment. At no point during our gaming sessions were we ever reminded (in a bad way) that we were running a wireless headset. Yes, we’ve already talked about the limited driver size that wireless necessitates, which does affect bass reproduction, but there were no dropouts, not even once.

And then there’s comfort. Comfort is key when it comes to PC products that you have to physically interact with, and there’s nothing more intrusive or distracting than a headset that just doesn’t feel right. Well, from the moment we popped the G933 on our heads (and we did bring in a second tester to confirm this), it fit like a glove. No overly-tight headband, no excess weight, and a perfect feel to the earcups. Logitech notes that these are made from a sports mesh, and we don’t doubt it. This is most definitely not your typical vinyl or foam cushioning. It feels great, and also feels like it will last through years of heated gameplay.

By the way, this may seem obvious, but the fact that the G933 is wireless adds immensely to the comfort in wearing it. No odd tugging when the cord gets tangled in something, nor any awkward moments as you run to grab a drink, only to be yanked back by your cable. Sure, going wireless has its drawbacks, as we’ve discussed, but we’ll take them every time when presented with the all-around comfort and convenience of the G933.

In case we haven’t made it clear yet, we love the G933. Sure, it’s expensive, and sure, audiophiles will cry foul at its limited acoustic range, but we think focusing on those two drawbacks misses the point. The G933 looks great, feels great, and for the most part works great (minus the Windows device issue), and it sounds good enough. And that combination of lots of great and a bit of good is the right balance from our point of view. That’s why the G933 is the only headset we actually use for gaming, despite having many at our disposal. It’s just feels so right once you put it on your head, you almost don’t want to take it off.

The Logitech G933 Artemis Spectrum Wireless Headset is available for $155, as of our publication date. At that price, it’s a steal, as it’s already well below the $200 retail price it debuted at in January 2016.