Rough grip surface may not be to everyone’s liking; requires Logitech Gaming software for programming, rather than standard Logitech SetPoint software 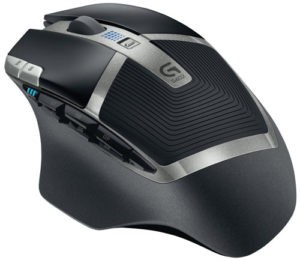 This is our first product review of 2015, and to ring in the new year, we’re bringing you a new review format. Rather than post reviews of every product that crosses our desk, as many review sites do, we’ll be highlighting one product a month that we’ve tested extensively and recommend. The idea behind this is that we’d much rather take the time to publish a review of a product that we like rather than one that we do not. From here on out, if we publish a review, it’s for a product we’d buy ourselves (and in many cases, like this Logitech G602 mouse, we actually have!).

The G602 is one of Logitech’s high-end wireless “gaming” mouse, just a notch below its most expensive mousing products. It has a retail price of $79.99 (although it’s always discounted below that), and directly competes with a number of wired gaming mice in the same price range. As we’ll discuss below, it really is more than just a gaming mouse, which is what makes it such a unique product in the crowded mousing arena.

To hit what we consider to be a very fair pricepoint, Logitech had to sacrifice a few things that are included in its high-end wired gaming mice and its high-end wireless office mice, respectively. First, it doesn’t have the ultra-high polling rates of wired gaming mice, like the G402, or the adjustable weights of the G502. The weights likely wouldn’t fit alongside the required batteries and internal wireless hardware, and of course the polling rate is a function of the transmission medium. A wireless connection is never going to have the same potential as wired connection. Our opinion is that for all but the most die-hard gamers, the G602 is plenty fast. After all, just because a car doesn’t go 200MPH doesn’t mean it doesn’t drive just fine at highway speeds! Note that in one concession to customization, the G602 can run on one battery or two, giving you an option to make it very light. We preferred using it with both batteries in tow. 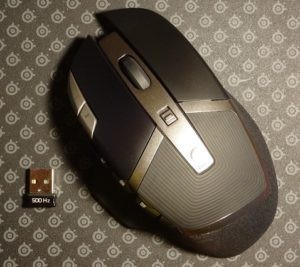 In comparison to high-end office mice, like the Performance Mouse MX, the G602 loses the included rechargeable battery back with USB charging, along with the Darkfield Laser technology that allows the MX to work on glass. In our opinion, these two trade-offs are well worth making. You see, to run the Darkfield laser, the MX absolutely burns through batteries. In comparison, the optical sensor in the G602 happens to be far more efficient at what it does. If you really need to work on glass, then you know where to go, but for everyone else, Darkfield isn’t worth the compromises it brings. We’ve used it in the Anywhere Mouse MX, which we routinely use on glass coffee tables, tile counters, and just about everywhere else a portable mouse might end up, but in a dedicated office mouse, it’s simply unnecessary. And that brings us to the other “missing” feature – a battery pack with USB recharging. Yes, that’s nice when your mouse runs out of charge mid-day, but with 250 hours of life in Gaming mode, and 1,440 hours in Endurance mode (selected from the top-mounted toggle), the G602 just isn’t going to leave you handing all that often. Compare that to about 12 hours for the typical Darkfield mouse and you’ll see what we’re getting at here.

Perhaps the closest comparison to the G602 is Logitech’s G700s Rechargeable Gaming Mouse, which combines onboard recharging, ultra-high polling rates, and a laser sensor into one product. We haven’t tested it, but we know that the battery life is quite a bit worse than the G602’s (on the order of 20x shorter), while the increased speed may be difficult to take advantage of. Did we mention that the G602’s Endurance mode translates to half a year’s worth of 8-hour days!

Like most modern high-end mouse products, the G602 is programmable. Surprisingly, it doesn’t integrate with Logitech’s SetPoint software, used by the brand’s mainstream peripherals products. That means that even if you’re already using another Logitech keyboard or mouse, you’ll probably need to add additional gaming-centric software to get the G602 to work its magic. Once loaded up, you can take control of the eight programmable buttons (eleven if you count the left and right buttons plus scroll wheel), the sensitivity, and the user profile stored in the G602’s onboard memory. Interestingly, the G602 loses the “HyperScroll” wheel that Logitech pioneered and still features on many of its mice, but that’s a feature we seldom used in the past.

So, loaded up with two rechargeable AA batteries that we had on hand, how does the G602 perform? In a word, marvelously! It works nearly as well in games as the wired laser mice we’ve tried, while never suffering from that cord-dragging phenomenon that you just can’t escape when you’re tethered to your PC. Furthermore, it has an ideal shape and weight for long-term office use, which is one of our primary uses for it. The integrated thumb rest is a particularly nice touch. We also like the 8 programmable buttons, although for the most part, we only use four – two pre-programmed sensitivity buttons up top, plus a couple of the side buttons for forward and backward navigation. Perhaps most importantly, The G602 is smooth – being a proper gaming mouse, it has four PTFE feet that allow it to glide across just about any surface, although we strongly recommend you invest in a quality mouse pad, like the SteelSeries 4HD we use.

The one thing we weren’t immediately fans of was the rough gripping surface, a far cry from the tacky surfaces used on many high-end mice. Over time, we’ve come to appreciate it, however, as it simply does not wear, nor does it attract oils from hands or food. In other words, it’s extremely durable, which we think is a reasonable trade-off for the lack of a cushy, rubbery grip.

There’s just no doubt about it – the G602 is a fantastic mouse, for gaming or otherwise. We’ve used plenty of wireless mice, and none have been remotely capable of delivering a solid gaming experience, either due to dropouts, an uncomfortable, bulky grip, excess weight, or plain poor performance. The G602 suffers from none of these problems. Furthermore, it’s also the best wireless mouse we’ve ever used for office tasks, proving comfortable over long work sessions, while also providing excellent battery life, something that simply isn’t worth trading off for when you use your mouse as much as we do. All that being said, if you’re looking for a dedicated gaming mouse, there’s no doubt that a high-end wired gaming mouse will provide a more direct connection to the experience than the G602. We use the G602 more than every other mouse we have combined, but for fast-twitch gaming, we still choose a good wired mouse over the G602.

The Logitech G602 is available for $68 shipped from Amazon, as of our publication date.