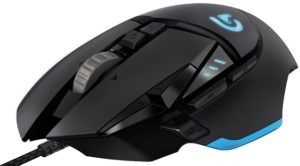 Computer mouse reviews can be tricky to write. So much about the mousing experience comes down to how a mouse fits a users hand. And that comes down not just to size, but to shape as well. Each mouse manufacturer has developed its own particular and unique designs to cater to specific users. And among all manufacturers, one stands above the rest, at least in terms of volume: Logitech. Frankly, if you’re shopping for a new mouse, it’s nearly impossible to miss Logitech’s many offerings. Of these, G502 Proteus Core is likely the one that has garnered the most attention of late, both due to its high-end specs and its eye-catching design.

In choosing to review the G502, we decided it didn’t really make sense to review it in a vacuum. Instead, this will be a review of three generations of the Logitech G, demonstrating how Logitech has modified its designs to match the changing consensus on the ideal grip.  The two other mice featured in this article are among the most popular mice of the past 10 years: the vaunted G5 released in 2005, and the G9x released in 2012. You can see the G5, G9x, and G502 below: 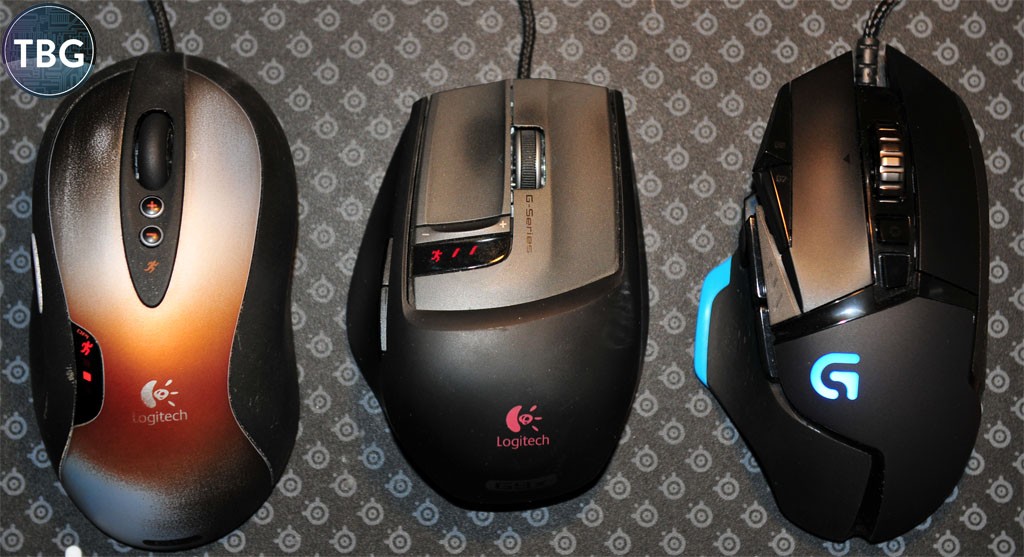 The G502 is currently Logitech’s highest-end wired “gaming” mouse, just a notch below its most expensive mousing products. It has a retail price of $79.99 (although it’s always discounted below that), and directly competes with a number of wired gaming mice in the same price range. As we’ll discuss below, it strikes a very fine balance between the G5 and G9x, and improves on both in numerous ways. In the process, it will likely suit an even greatest number of users than either of the older models, even if it’s far from perfect.

To arrive at what we consider to be a very good compromise in terms of shape, Logitech backtracked a bit in terms of what it had done with the revolutionary G9x, providing many of its contours, but with an overall shape reminiscent of the G5. 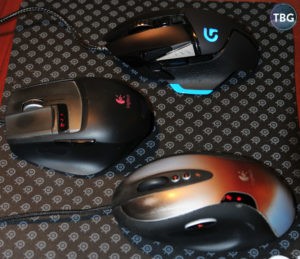 To the casual observer, the old G5 would probably pass for a bog-standard mouse today, if it weren’t for the funky coloring. It’s a bit bulbous, with a rounded shape evoking popular but long-discontinued general-purpose mice like the Microsoft Intellimouse. It encourages the user to rest the entire hand on the mouse, which is very relaxing, but doesn’t necessarily lend itself to precision control.

The G9x really pushed gaming mouse design in a new direction, with an almost entirely flat top, a wide stance, and noticeable contours to engage the fingers and thumb. The G502 brings back the overall profile of the G5, but with the G9x’s pronounced contours. Of the three, the G502 is our favorite, in part because the hybrid palm/claw grip it encourages suits us the best.

To give readers a bit more context for the discussion of grip, which we consider the key distinguishing feature of any mouse, we’ve put together a compendium of photos below, illustrating what we believe to be the ideal grip type for each of these mouse designs. The G502 on the right won’t allow you to rest your whole hand on it (unless you have much smaller hands than we do!), but it does offer a more relaxed position than the short, flat G9x. Ultimately, we think mice should have a pronounced curvature on the top surface, because the human hand is rounded when gripping. It just makes sense. That inevitably means the mouse has to be a bit bulkier, as it adds what is essentially vertical dead space. Previous attempts at foisting a hockey puck-shaped mouse on users failed miserably, however, and it’s something mouse designers really ought to keep in mind. 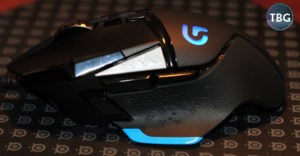 There are a few design enhancements to note about the G502’s versus previous generations. It features a tactile grip on both sides of the mouse, but rather than being a soft rubber, it’s hard and textured, meaning it will likely last longer before wearing away, a common problem with mice given all the oil they inevitably pick up off your fingers. The G502 also has a nice shelf built into both sides to rest your thumb and pinky, allowing you to easily use the mouse without dragging your thumb or fingers on the mouse pad. The G502 also has a nice complement of buttons. In addition to forward/back buttons, it offers the now-obligatory on-the-fly DPI adjustment buttons (which have five programmable settings), and Logitech’s cool dual-mode scroll button (thankfully on the top of the mouse rather than inexplicably underneath like the G9x). Finally, you get a “sniper” button right under the thumb. Whether this is of use to you really depends on the games you play and your particular gameplay style. We found it to be more annoying than anything else, as we constantly hit it while simply surfing the web or mousing around the desktop. It could probably be placed a little further forward or better yet made smaller, in our opinion. Finally, the G502 uses a large metal scroll wheel in place of the typical rubber wheel, and while it takes a little getting used to, it’s probably a good change for the long term, as it won’t deteriorate as quickly and provides more tactile feedback on scroll speed due to its built-in ridges.

While all the changes mentioned above are essentially aesthetic or affect feel, another change more directly impacts performance. And no, we’re not talking about the new optical sensor, which apparently is both more precise than previous lasers while avoiding the acceleration inherent to all laser designs. We can’t really judge the importance of ultra-high DPI levels, because, frankly, we find them impossible to use while actually gaming. So we won’t comment on the sensor except to say that your cursor (or character) goes exactly where you point it, exactly when you want it to. 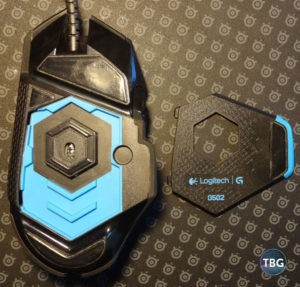 The change that merits more discussion is the G502’s highly-customizable weight system. Logitech has moved from a rear-mounted weight tray used in previous G-series mice to weight holders molded directly into the bottom of the mouse. That allows you to spread the weight more evenly, while keeping the mouse’s center of gravity as low as possible. This is all great, and has been seen in competing mice like Corsair’s M65 (which was far less customizable), but it introduces a new problem. To allow for insertion of weights, the bottom of the mouse is covered by a magnetic lid, and unfortunately it extends all the way to the right side of the mouse without including any mouse feet. As a result, the mouse drags on that side.

The friction produced by this design defect is compounded by the fact that Logitech inexplicably endowed the G502 with a textured bottom surface. That’s exactly what you don’t want when the goals is smooth motion, and it can indeed be felt when moving the G502 in certain directions on a low-friction hard plastic mousing surface like the Steelseries 4HD that we typically recommend. It’s less noticeable on the Steelseries QcK cloth pad, but that’s in part because the pad introduces more friction that essentially masks the effect. It’s the only true flaw we’ve found in the G502’s design, and it compromises what is otherwise a very low-friction design, thanks to big, slick feet. And that’s a shame, because being a bit heavier than many smaller gaming mice, the G502 probably didn’t need to have lots of weight addition options to satisfy most users.

There’s just no doubt about it – the G502 is a fantastic mouse, and will likely appeal to a greater number of gamers than just about any mouse on the market today. But in so doing, it will likely be the very best option for few if any gamers, as its design is clearly intended to be a compromise, blending the best attributes of several different approaches to gaming mouse design. Finding the ideal mouse is about as personal a decision as any in the world of technology, not that different than finding the proverbial shoe that fits. We’ve used plenty of gaming mice at this point, and the G502 is our favorite, but our quest for the perfect mouse continues. Alas, it’s ever-so-slightly too small for our hands (and there’s the drag issue as well). Of course, when when we find our perfect mouse, we can almost guarantee it won’t be the perfect mouse for you!

The Logitech G502 Proteus Core is available for $60 shipped from Amazon, as of our publication date.