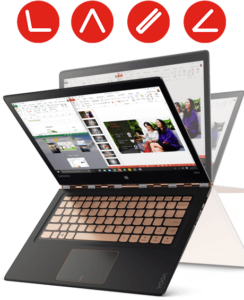 Lenovo is the biggest laptop manufacturer in the world by volume, and not surprisingly, it has a huge portfolio of laptops to choose from. What this means, of course, is that some of these models are bound to be less than stellar, while others might get lost in the shuffle. What we have here today is a model that falls into the latter camp. We’ve had our eyes on the Lenovo Yoga 900S since it was released, and recently had a chance to take it for a spin. For whatever reason, Lenovo just didn’t market this model with much gusto, and we’re pretty sure it’s a poor seller for the company, but based on our hands-on experience, we’d say it should be on anyone’s short list when it comes to an ultra-light and ultra-capable PC at a great price.

We purchased our Yoga 900S at retail from the Lenovo website, which is the only reliable source for this system. While it was originally on display at Best Buy stores, it’s disappeared from store shelves, and while you can still order one through the Best Buy website, going Lenovo direct offers much better prices. 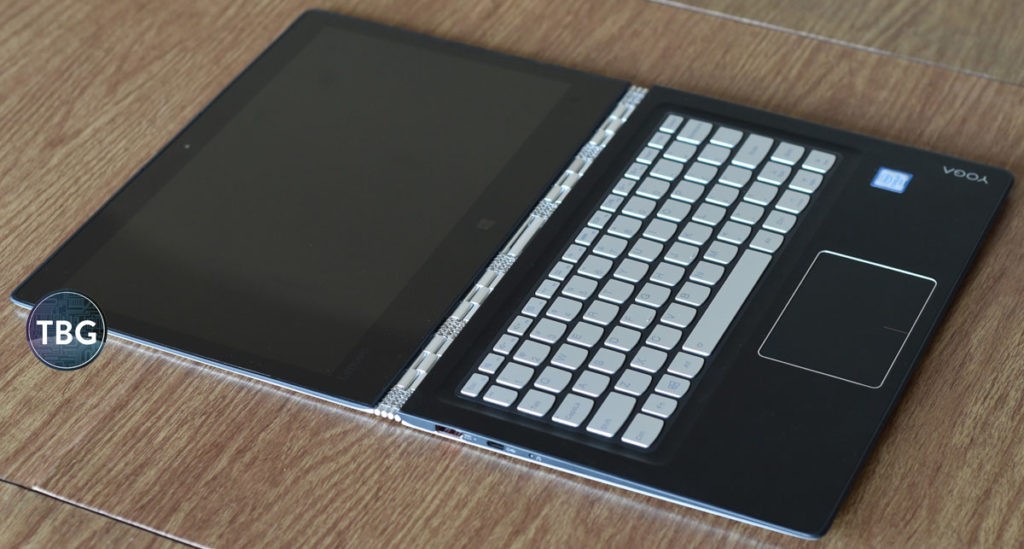 Of course, you’re not buying this based on internal specs alone: what the Yoga 900S offers that no other laptop can is a shockingly-low weight combined with excellent build quality and aesthetics. It inherits the trademark “watchband” hinge first introduced in the larger Yoga 900, and looks  great in either color choice. At just 2.2lb. and 0.5″ thick, this is by far the lightest 2-in-1 laptop available anywhere at any price, and we believe it’s the slimmest as well. No, it’s not the lightest laptop ever, but no sub-2lb. model is going to offer a touchscreen, let along a tablet mode. That makes the 900S a whole lot more versatile than its lightweight peers. 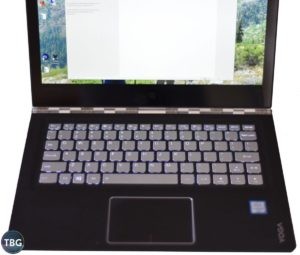 The 900S uses a matte plastic finish on its internal surface, and while this may not draw the eye quite as much as the brushed aluminum or magnesium surfaces of other laptops, it’s incredibly practical, as it provides a comfortable perch for wrists, while also holding the laptop in place when flipped into tablet mode and placed on a flat surface. Furthermore, it’s unlikely to show scratches, although we did notice it would pick up its fair share of dust, due to the tacky surface.

Unlike a lot of ultra-lights, the Yoga 900S offers a backlit keyboard, which you can toggle on and off using the somewhat unorthodox key combination of function-space bar. The lighting is very classy, providing nice visibility even in bright conditions, without looking garish. The keyboard itself offers decent feel, although it has a necessarily shallow keystroke, given the slimness of the system. The mousepad is quite responsive, and while it’s a bit small in size compared to the oversized surfaces showing up on many larger laptops, thanks to the trend set by Apple, we think it’s plenty big. The one glaring flaw in the 900S input device layout is the placement of the up-arrow key right next to the miniature right-shift key. This is something that a lot of manufacturers do, and it’s a mistake every time. And we know that Lenovo can do better, as its older Yoga 700, which we have but never published a review on due to its limited release, dropped the arrow keys down a row to make way for a full-size shift key. This is a clear case of form over function, as it makes the 900S look more symmetrical when viewed head-on. 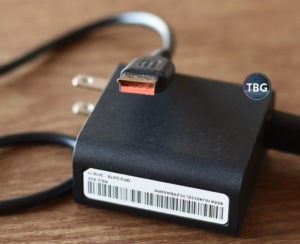 One of the great things about the low-power CPU used in this system is that it, surprisingly enough, doesn’t require much power. The AC adapter shipped with the 900S is barely bigger than your average cell phone charger, making the whole package just that much more portable. As shown in the accompanying photo, the plug uses a modified USB connector. This ensures that you don’t accidentally plug the power into a data-only port, but also has the advantage of providing a free USB port when the charger isn’t in use.

Speaking of ports, the 900S is a bit limited in that regard, again following the (poor) example of Apple. You get that dual charger/USB 2.0 port, another USB 3.0 Type-A  port, and then a USB 3.0 Type-C port, which doubles as the device’s only video output. Yes, we know USB Type-C is the future, but the future isn’t here yet, and most users are going to end up scrambling for the right video converter to use this with their monitors, projectors, or HDTVs. Also mysteriously missing from the 900S is a memory card reader, a serious drawback for content creators on the go. At least it still has a headphone jack! 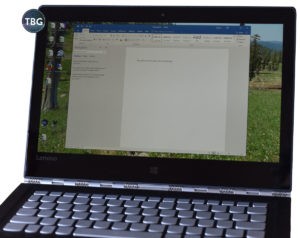 In our opinion, flat-out performance isn’t what you buy an ultra-light laptop for, and the 900S isn’t going to blow anyone away in terms of either speed or battery life. That being said, with its Intel Skylake-based M7-6Y75 dual-core processor, the 900S is more than capable of getting through typical home or business tasks. Interestingly, until Skylake came along, the M-series was styled as the Core M-5Y71, for example, but to make it sound more like a mainstream processor Core i5/i7 processor, Intel performed a little naming magic, and poof, it became the M5 and M7, rather than the M-5 and M-7. Don’t be fooled – these are still the ultra-low-voltage chips that Intel originally developed for fanless tablets, and while they are more than fast enough, they aren’t barn burners.

We found that our system booted up in just over 10 seconds, which is great, but it has a lot more to do with the fantastic PCIe-based solid-state drive in the system. The CPU is really just along for the ride. In fact, if the M5-based model were available with the upgraded RAM and SSD of the M7 model, that’s what we’d recommend, as the M7 is only about 10-15% faster. Alas, you have to accept the whole “premium package” when you upgrade, much like you do with an automobile, so the M7-based model has all the bells and whistles, the critical piece being a full 8GB of RAM. 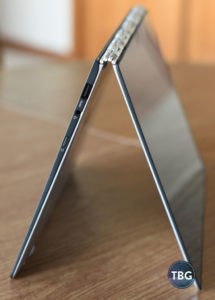 But here’s the thing: given that this is ultimately just a buffed up tablet CPU, it can still run without a fan. And using a laptop that doesn’t just run quietly, but silently, is truly a revelation, and worth any penalty you pay in performance if your bread-and-butter workflow involves Word, basic Excel spreadsheets, Powerpoint, and Internet use. This system will never be taxed by such applications, and you’ll get to enjoy a blissfully-quiet computing experience. The one “tablet-y” aspect of the 900S that we could do without are the large bezels around the screen. Whether this was simply a concession to making the screen housing large enough to actually fit a touchscreen in or whether it was to provide a grip area for tablet use, we’re not really sure, but in typical laptop mode, it definitely takes the shine off an otherwise stellar industrial design.

Once you get past those bezels, however, you’ll be impressed by every other aspect of the design. We loved using the 900S in tablet mode for content consumption, for example a Netflix or Amazon movie on the go (or in the hotel room). This mode really shouldn’t be overlooked, as it’s a lot more pleasant to use for content consumption that simply perching a laptop in front of you. The various lights and colors on a keyboard, along with the keys themselves, can truly distract from a movie watching experience, in the world of the modern cramped airliner, many laptops can’t even be opened without risking getting crushed by the unexpected recline of the passenger in front of you. As far as we’re concerned, there’s no better travel companion than the 900S in the computing world.

The one thing Lenovo just can’t get past are the laws of physics (and chemistry), which dictate how much power you can pack into a given size of battery. With this model’s slim chassis and relatively-small footprint, it just can’t fit a very large one. The 4-cell 53 Watt-hour li-polymer unit is rated by Lenovo to power the 900S for 10.5 hours, but in our testing, it averaged around 8-10 hours for typical office tasks, and quite a bit less during video usage, draining in around 4 hours. That’s still very good, but not really ideal for coast-to-coast movie binging. Again, you can’t pick and choose specs (it’s either base or upgraded), but if we had our choice, we’d ditch the ultra-high-resolution 2560 x 1440 screen, which is a bit too sharp for the 12.5″ screen anyway, in exchange for the battery life boost that you’d get from a more pedestrian, but in our opinion just as usable, 1920 x 1080. 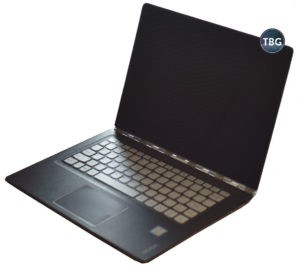 Overall, the 900S is most definitely a laptop that could suit just about anyone. It’s light enough to practically forget about in your shoulder bag, and classy enough to take into a boardroom. With its ability to flip into tent and tablet models, it’s also extremely versatile, especially in cramped quarters like an airplane cabin. In fact, we’d go so far as to say that we’d never again choose a standard laptop for air travel having tested a number of Yoga devices over the years. The only thing we wish is that Lenovo provided a few more configuration options, as we’d love to see the 900S with the base M5 processor and 1080p screen, but the upgraded 8GB of RAM and larger solid-state drive. And while a full-size SD card slot would be ideal, adding in a microSD card reader at a minimum would be a welcome benefit for content creators.

As of our publication date, the high-end 900S that we tested (and recommend) is available for just $849 in the champagne color, or a less compelling $1,249 in the platinum color. Lenovo runs new promotions every week, so if the model you want sells out or isn’t quite cheap enough, it’s always worth coming back a little later to see if stock and prices have changed.

To see all of our top picks among laptops on the market today, check out our Laptop Buyer’s Guide, updated quarterly!