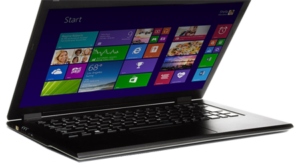 Hot off the assembly line, we had a chance to spend some time with the new ultra-light Lenovo Lavie Z and thought we’d share our impressions. First off, we tested the one and only configuration currently available at Lenovo.com. It’s equipped with an Intel Core i7-5500U@2.4GHz, 8GB RAM, a 256GB solid-state drive, and a 13.3″ 2560×1440 screen. There’s also a LaVie Z 360, which adds touch capabilities along with a 360-degree hinge for another $200 or so. The retail price of the LaVie Z is $1699.99, but Lenovo never actually sells its popular products at retail prices, and the relevant street price is $1499.99. 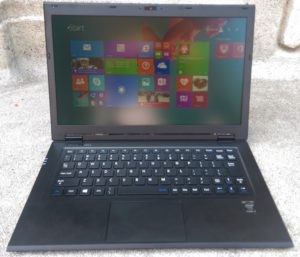 The one truly outstanding feature that the Lavie Z brings to the market is a mesmerizingly-low weight. At just under 1.9lb., this is by far the lightest 13.3″ laptop available anywhere. Handling the Lavie Z for the first time, you can’t help but think that this laptop isn’t real, that it’s instead a prop for use as a store display. It’s so incredibly light that it really does give the impression of being hollow inside. Unfortunately, the frame of the LaVie Z, a magnesium-lithium compound, mimics the feel of plastic, not quite what you might want in a high-end laptop. Luckily, the LaVie Z doesn’t skimp on the internals.

What this is not, however, is a typical Lenovo laptop. In fact, it’s built for Lenovo by NEC of Japan, and it’s pretty clear that some things were “lost in translation.” First of all, the styling is pretty bland, and the not-so-thin profile is blocky and far from streamlined. And things get a bit worse once you open the laptop up: typing on the keyboard is a true challenge. The keys are a little far apart vertically, and as expected, the travel is quite minimal, but the biggest problem is the key layout. Every time we reached for the backspace, we hit the forward space, which honestly doesn’t even belong on an English-language keyboard. The delete key, which is half-sized and next to the right-control key, is very awkwardly placed, especially for quick control-alt-delete maneuvers or any kind of major text editing task. You might also find yourself hitting the up-arrow key when reaching for the right-shift key. And one last pet peeve – it adopts the Lenovo-style function key layout, in the left-most spot where the control key typically resides.

The good news is that the trackpad just about makes up for these flaws – it offers chiral scrolling, allowing you to scroll up and down through large documents easily, although there was a bit of lag before the touchpad caught on to what we were trying to do each time. There’s also two finger scroll, which can be configured to have a downward motion scroll up or down, based on user preference.

The screen was very visible outdoors, aided by its matte finish, but off-angle viewing was sub-par under bright light, particularly side-to-side. It was much better indoors, and was also very visible from below a 90-degree angle, allowing you to tip the screen back to a comfortable position without compromising screen clarity. The 2560×1440 resolution made for crisp text with good Windows scaling. Frankly, the resolution is perfect for this size of screen – 4K need not apply! Note that colors won’t pop as with a glossy screen, but usability will be superior.

We didn’t have the Lavie Z long enough to perform thorough performance benchmarks, but we have a couple performance numbers for you: the LaVie Z had a cold boot time of 8.6 seconds to the Windows desktop, awoke from sleep in 2.0 seconds, and awoke from hibernation in 6.5 seconds. Running 1080p YouTube videos wasn’t a challenge at all, utilizing just 15 percent of the CPU’s capacity, and app-switching was instantaneous. This is a seriously-fast laptop, no doubt about it. We found that battery life averaged around 7-8 hours, and the rear-facing fan spun up throughout our tests, but remained impressively quiet. The speakers, mounted on the front edge and facing down, did not produce particularly good sound, but are adequate for basic use. In a laptop this light, don’t expect any bass at all! The LaVie Z’s profile isn’t all that pretty, but at least you get a full-size HDMI port, two USB 3.0 ports, a headphone jack, and an SD card reader. 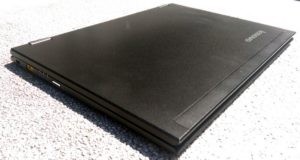 Overall, the LaVie Z is most definitely a niche product. If you want the lightest 13.3″ laptop in the world, it’s your only choice. And for anyone who travels frequently, the pound or so it saves versus similarly-equipped 13.3″ laptops is very noticeable. But if you aren’t a frequent traveler, some of the idiosyncrasies of the LaVie Z might make it harder to live with on a daily basis. The keyboard is downright wacky, the fit and finish is a bit below what one would expect from the ultra-premium price, the trackpad is good but not fantastic, and while the screen is very usable, it doesn’t stand out from the pack. The LaVie Z is most definitely a technological marvel and has no serious challengers in its weight class, but it’s not the best laptop in its price class.