As any laptop user knows, there’s more to a laptop than a CPU and its benchmarks. For nearly two decades Intel has worked hard to make the laptop user experience better. Sometimes this has worked out well, sometimes it hasn’t moved the ball forward quite as much, but Intel is back at it with its new Evo marketing campaign and verification system. Intel Evo is intended to make the process of buying a high performance thin and light laptop better. Want to learn more? Keep reading, or just watch our YouTube video that summarizes it all!

Before we get into Evo, let’s take a walk down memory lane. Back in 2003 Intel released its Centrino platform and marketing campaign. Centrino was intended to signify a combination of three interlinked components: the CPU (starting with the Intel Pentium M and then the Intel Core Duo and Core 2 Duo), combined with a modern chipset, and Intel Wi-Fi. Keep in mind that back in 2003, Wi-Fi was a very new concept, so the inclusion of it in a laptop was relatively revolutionary. Eventually Centrino came to only refer to Intel’s in-house Wi-Fi chips, meaning it was time for a new laptop brand.

It wasn’t until 2012 that Intel initiated what was perhaps its boldest marketing campaign, the Ultrabook campaign, no doubt inspired by Apple’s MacBook Air which used an Intel processor to great effect when it launched in 2008. It came in at under 3 pounds, which was unheard of at the time and perhaps caught Intel’s other partners flatfooted despite the fact that they all used Intel processors. Intel realized that its other partners needed a bit of an extra push to catch up Apple and fend off the onslaught of a new breed of product also ushered to the market by Apple, namely the tablet. Thus, in 2012, Intel brought many of its manufacturing partners in the Windows to mimic the MacBook air. In essence Intel was competing against one of its biggest partners, Apple, and this probably led to a simmering bitterness which may have led Apple to design its own chips and part ways with Intel.

But while the Ultrabook campaign may have come four years after the Macbook Air, and no doubt antagonized Apple, it ushered in a broad range of thin and light laptops that the Windows world had not seen before, namely ultralight models under 3 pounds and 0.8” thick. This was in part made possible by Intel’s advancements in processor design, starting with the Sandy Bridge architecture which was revolutionary at the time both for laptop and desktop computing. These chips were powerful and efficient, and the Ultrabook brand required a minimum battery life requirement: first five hours, later increased in 2013 to six hours of video playback or 9 hours of idle in 2013. Also in 2013 Intel extended the Ultrabook requirement to include a touch screen, which may have been the death knell for the Ultrabook brand because it increased price and also increased size of laptops while decreasing the battery life. This was done in coordination with the launch of Microsoft Windows 8, which heavily marketed its novel (if cumbersome) touch interface. As it turns out, both Microsoft and Intel misjudged laptop users because while tablets were stealing market share from laptops it wasn’t just because they had a touch screen but because they also performed a different function. There was definitely still a place for laptops, even touchscreen laptops, but competing directly against tablets wasn’t the right approach. Ironically, when the touchscreen requirements were added to the Ultrabook brand, the brand began to die off, likely because prices went up, the size of the laptops went up, and the battery life went down. It wasn’t a good look for laptops.

Fast forward to 2019 and Intel announced its project Athena that was supposed to revolutionize laptop usage. The problem was that there was no brand at the time, but that was remedied in September 2020 when Intel announced the Intel Evo initiative, a branding and verification system for laptops. Of course all of these laptops would use an Intel processor, but the big change here was a requirement for battery life testing. Manufacturers would have to use a test specified by Intel, because for far too long laptop manufacturers have marketed battery life specifications based on a variety of metrics that did not match up with real world usage. Intel specifies that a laptop can only be Evo-verified if it can last nine hours in real world usage using Wi-Fi and online apps with a full HD screen (1920 by 1080). 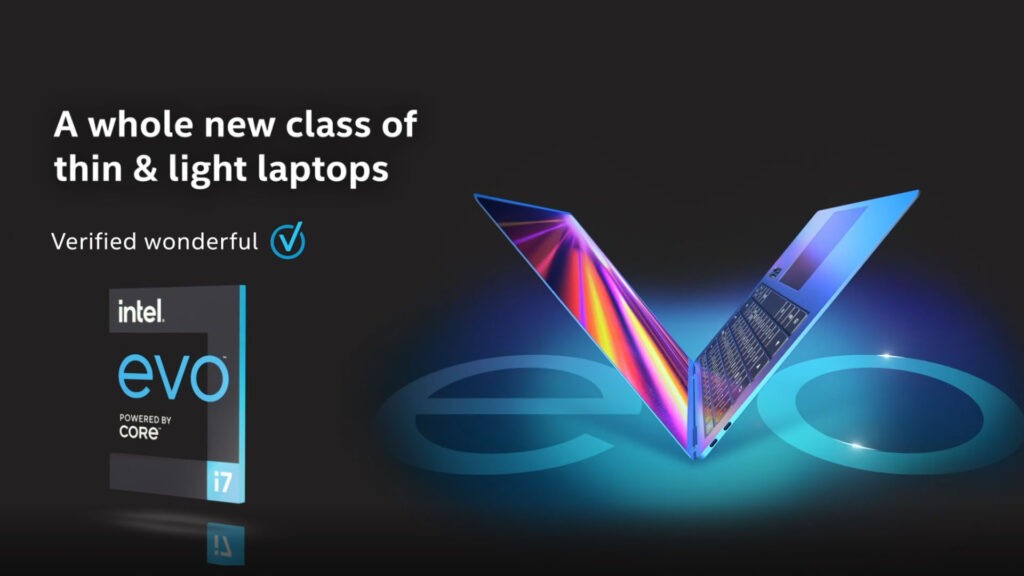 Cynics among us may wonder if this is just a ploy by Intel to distract from the fact that it has a new competitor in the laptop CPU market in the form of AMD. No doubt AMD’s Ryzen processors have put AMD back on the laptop map thanks to packing in more cores and performing extraordinarily well. It remains to be seen whether AMD can get the design wins it needs among manufacturers like Lenovo, HP, Dell, Asus, and Acer, and more recently LG as well. There’s so much that goes into creating a laptop beyond just installing a CPU, meaning Intel does have the upper hand here because it’s been working with these manufacturers for a long time. It can also build on the experience of Centrino and Ultrabook.

But what does Intel Evo really mean? Well, there are a number of required  components:

In addition to component requirements, there are certain benchmarks that must be achieved, which is where the certification or verification element of the Evo branding comes into play. As I said we do have a 9 hour battery life requirement, along with a requirement that the system wake from sleep in less than one second and offer some quick recharge capability (this is up to the manufacturer to specify, although initially it was set forth as providing four hours of charge in under 30 minutes). When you put it all together, what Intel is trying to do is improve the user experience. CPU performance really isn’t the deciding factor for a lot of users because these types of laptops don’t need extreme CPU performance; they need good CPU performance and they need a great user experience.

Now what about weight and thickness? Keeping in mind that Ultrabooks did have a requirement of being under 0.8 inches, you may find it surprising that there is no official requirement for Evo laptops. Intel initially published a spec requiring that they be under 15mm, but this hasn’t been put into practice. You’ll find that the Intel Evo laptops on the market are mostly under 15mm (0.6 inches), but some are a little bit thicker, and I think Intel probably relaxed that requirement to get on the good side of some of its manufacturing partners that already had popular designs above the 15mm spec. There is no weight restriction, but most of these in practice are under 3 pounds, which has been more or less the standard for a decade. The other requirement that Intel has put in place is a bezel to screen ratio. Unfortunately, it hasn’t made this ratio public, but you can assume that most of these laptops will have thin bezels often referred to hyperbolically as razor thin. Of course, they are never literally razor thin, but most are quite attractive, which is really the main point. Speaking of the screen, while Intel added a touchscreen requirement in 2013 to the Ultrabook brand, it hurt the brand. Thus, it comes as no surprise that Evo laptops do not have such a requirement, although the vast majority of models currently on the market do feature touchscreens.

As a regular laptop user over the past 20 years or so, I can attest to the fact that a laptop really is about more than performance in a benchmark. I need a laptop that’s thin and light, that fits in my bag easily, that has great battery life, and turns on when I press the button or open the lid and is immediately ready to use. Of course, good looks don’t hurt, because frankly a laptop is something that you hold in your hands, sit in front of for long periods of time, and perhaps use out in public. I think that’s why the bezel to screen ratio is actually sort of important as is a general trend of being relatively thin.

I think we can all agree that Intel has a resurgent competitor in the form of AMD, but AMD must do more than manufacture CPUs to win market share. Its limited use so far in laptops despite good benchmark performance is a sign that a laptop should be judged based on more than how fast a CPU can run a synthetic test. Most professional laptop users will directly benefit in a tangible way from the specifications that Intel has provided for Evo laptops because most of them are not rendering videos all day long, playing games, or running AutoCAD models. They are jumping into a Zoom meeting, running an Excel macro, creating a PowerPoint, or checking email while watching videos on YouTube. Intel’s quad-core, 8-thread processors have long been masters at this sort of thing. The next step was making laptop users fall in love with laptops all over again, and that’s what Intel’s Evo branding and verification is all about.

Want to pick up your own Evo laptop? Here are some great choices!