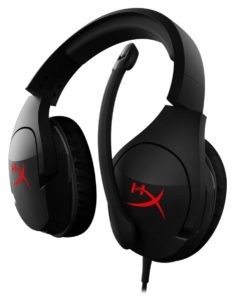 The headset industry has absolutely exploded over the past few years, as more and more gamers turn to online gaming, which often use in-game voice chat, as well as competitive e-sports gaming, which requires the use of headphones, as speakers just aren’t feasible in an open event. And all the big names in audio and gaming gear are vying for your hard-earned dollar. There’s also of course a big market for smartphone headsets, which we view as distinct; these are typically going to be focused more on style than functionality, and often carry a very high price tag. Gamers don’t care quite as much about all that. They want performance, comfort, and precise audio.

And HyperX, a division of Kingston, has been the undisputed leader in this arena for quite some time. But it’s not alone. HyperX has Razer’s fan-favorite offerings to contend with, along with well-priced but less trendy Logitech offerings. You can also find great options from SteelSeries (which has just announced the follow-up to its Siberia line, dubbed the Arctis, starting at $80), and audio industry veteran Audio-Technica is working hard to capture the high-end, starting at $130 or so.

With a lock on the best options in the $80-$120 price range, however, HyperX needed to do something different to truly capture more market share. Rather than go straight at its competition, HyperX has decided to capitalize on its tremendous brand recognition by going after the budget headset market, which no big name has been willing to chase previously. And that’s how we find ourselves testing the brand-new HyperX Cloud Stinger, a high-performance headset with a very low-end price: $50. What did HyperX need to give up to bring a high-quality headset down to this price? Read on to find out!

We’d like to extend a special thank you to HyperX for providing this review sample of the Cloud Stinger Headset.

First off, the HyperX hasn’t skimped on audio. The Cloud Stinger uses dynamic 50mm drivers with neodymium magnets, along with a circumaural, closed back design. While these aren’t quite the same 50mm drivers you’ll find in HyperX’s high-end Revolver Headset, they’re still a lot better than what the typical “budget” headsets provide. 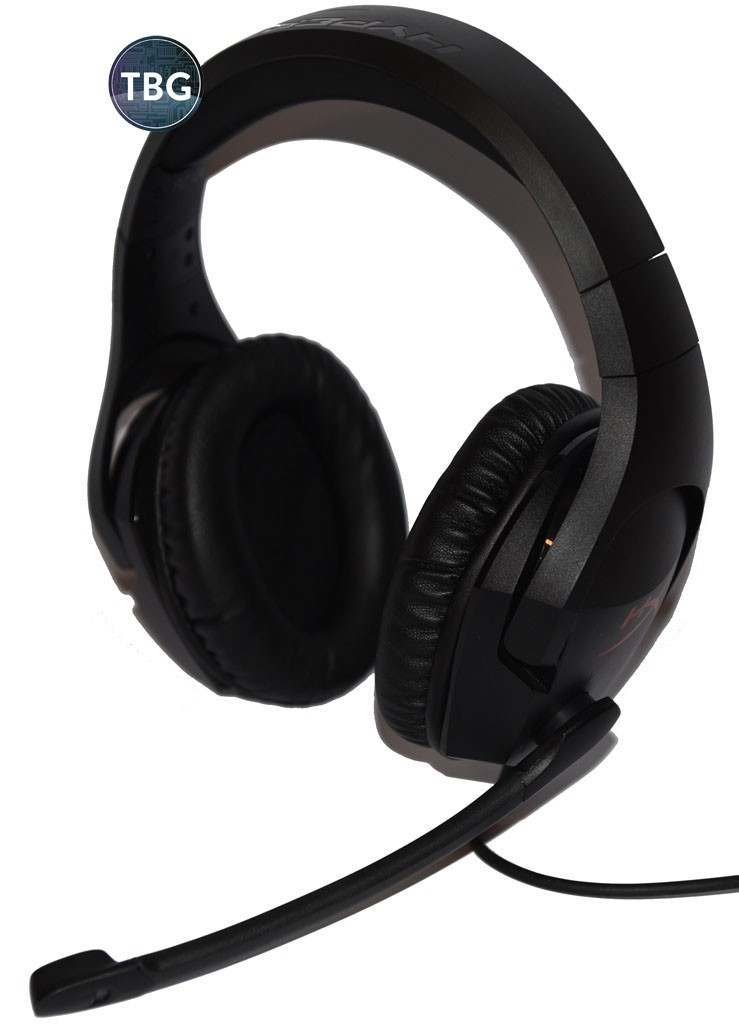 The Cloud Stinger can be connected to devices two ways: either with its 55″ 3.5mm 4 pole connector, for use with smartphones and game consoles with a single combined headphone and microphone jack, or with the additional 65″ extension cable featuring 3.5mm stereo and mic plugs. This is for use with PCs, which always have separate jacks for headphones and microphones. It also makes sense that you’d want the extension cable with this setup, as you’ll typically be sitting further away from your PC than your smartphone, and with a 120″ total reach, you can get very far away indeed! We’re actually not convinced the fixed 55″ cable needs to be as long as it is, given that console users will be plugging into their controllers, but HyperX probably erred on the side of a little more freedom of movement despite the potential tangle of wires.

While many current-gen headsets are getting fancy with lots of crazy color combinations, you’ll love the Stinger’s look, as long as you like black. You do get the stylish HX logo in a bold red on each can, but otherwise, it’s an all-black affair.

In terms of weight, the Cloud Stinger comes in at 9.7oz on our scale, which exactly matches the published spec of 275g. That’s actually really light for a headset, much lighter in fact than HyperX’s higher-end offerings. The HyperX is largely made of plastic, and we assume some cost-cutting had to be done in terms of materials and electronics to hit the Stinger’s pricepoint. You don’t get the leatherette headband covering, metal cup arms, or stylish steel frames you’ll see on some current models. The good news is that seems to pay off somewhat in terms of weight.

One last feature we’ll mention is what HyperX refers to an “intuitive” volume slider on the bottom of the right headset. While we agree that it’s intuitive in the sense that you can get some sense of the volume level simply by where the slider is, we didn’t think it was all that easy to use while wearing the headset. It’s just felt a bit awkward to hook our thumb underneath the headset and adjust the slider. It would have been better if the slider were on the back of the headset, which is easier to reach with your thumb. Overall, we still think a rotary dial is easier to use while wearing a headset, but it doesn’t give you an physical indication of what the current volume setting is, so we understand why HyperX considers the slider more intuitive.

And one feature the Stinger doesn’t have at all: software. With so many headset products now venturing into a digital world of RGB lighting and all sorts of surround effects, it’s nice to use a headset that is purely analog, no software required. A little bit old-school, yes, but refreshing nonetheless. 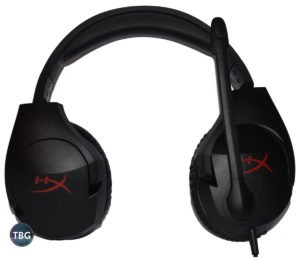 There are really two aspects of performance when it comes to headsets: audio fidelity and comfort. In terms of audio, HyperX has gone big, literally, choosing 50mm drivers for this low-cost headset. That means it’s big on bass, which is great for in-game explosions. But it was even better when it came to more subtle ambient sounds. In fact, during a few of our gaming sessions, we noticed ambient sound effects that we’d never heard before.

We’re not convinced, however, that the Stinger is the most musical set of cans, as it sounded just a bit muddled in our sampling of various audio tracks, including Adele’s album “25”, which our reference Audio-Technica headset was able to reproduce a bit more effortlessly. The Stinger sounded good, but mid-range got a bit lost in the mix. That being said, we don’t think anyone should buy the Stinger exclusively for music. HyperX might like to capture some of the market consisting of streaming audio listeners, as is evidenced by much of its marketing, but the Stinger’s sound quality is clearly tuned for the gaming audience, which is HyperX’s bread and butter, after all.

In terms of comfort, the Cloud Stinger is excellent, if not absolutely cutting-edge. Its low weight gives it an immediate leg up on competitors, but the swiveling earcups help a lot too. In fact, they swivel all the way to 90 degrees, allowing you to lay them on your chest and shoulders when you’re taking a break. We just wish the headband were a bit more flexible, as it always felt like the Stinger was a bit tighter than it needed to be to stay in place. And while it was easy to pull the earcups out of the notched band to lengthen the headset, we found it really difficult to shorten the extensions without taking the headset off. This isn’t going to be such a big deal once you’ve dialed in your size, but if a few people will be using the same headset, it could get a bit annoying.

But perhaps the most critical factor when it comes to comfort is the earcup material, and in this regard HyperX does a great job. Some competitors are going with a “sports” mesh, but HyperX sticks with a leatherette material here. We’d guess the former is better if you’re prone to sweating, whereas the Cloud Stinger’s soft leatherette is quite a bit more comfortable. Underneath the leatherette is what HyperX calls its “signature memory foam,” and while we don’t know what the “memory” aspect is all about, we can attest to the fact that it’s supple, with plenty of give plus a nice amount of rebound, meaning it forms to your ears nicely, blocking ambient noise and providing a refined feel.

When we used the microphone in conversation, folks on the other side of the ‘net could hear us loud and clear. It only got a bit distorted when we were experimenting with the position of the flexible boom and got too close. Keep it a reasonable distance from your mouth and the mic will function flawlessly. This boom mic is highly positionable, with a memory flex design that allows you to bend it so that it sits at the optimal distance from your mouth, where it will stay.

Note that you don’t get a USB converter box, which is popular on higher-end headsets intended for PC use, as such converters often offer virtual surround processing, along with a more convenient way to attach a headset to a PC (no need to figure out which 3.5mm jack is for headphones and which is for the mic). These boxes typically also include a mute button for the mic, but HyperX came up with a slick way to handle this without buttons: just flip the boom mic up to mute it. The only drawback: you don’t have definitive feedback showing that you’re actually muted, as you would with a depressed button, flipped switch, or indicator light. That’s a small price to pay given the low cost of the Stinger.

There’s just no doubt about it: HyperX hit a homerun with the Cloud Stinger. Coming in under $50 pricepoint probably wasn’t easy, and none of its big-name competitors have been willing to try. This is the land of cheap knock-off headsets with lots of neon colors and flashing lights, but nothing to brag about when it come to audio. The Cloud Stinger is just the opposite. With a focus on performance, the Cloud Stinger may not be all that eye-catching, but it’s the real deal. Excellent audio, impressive lightweight comfort, and nifty features like the flip-up boom mic and volume slider make it a real standout in the budget arena. In fact, it’s the only headset we recommend you even consider if you’re shopping in this price range.

The HyperX Cloud Stinger Headset is available for $49.99 shipped from Amazon, as of our publication date. To see all our recommended speaker and headset products, flip over to our Speaker/Headset Buyer’s Guide, updated quarterly!