Getting Serious About the Small PC Sector

Getting Serious About the Small PC Sector

By Ari Altman | Published January 9, 2016 | Updated January 27, 2016
Frankly, PCs have been “fast enough” for a while, and consumers are catching on that they don’t need to upgrade to surf the web or type documents, hence the downturn in the PC sector. What many PC users might appreciate, however, are smaller, more attractive PCs that they can place anywhere. A few OEMs and case manufacturers are catching on, as we saw at CES this year. 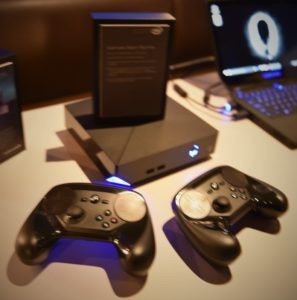 The Alienware platform is nothing new, and in fact systems using this exact case have been a big seller for Dell over the past year. What’s new is a system sporting Skylake processors, amazingly up to and including the ultra-high-end Core i7-6700. And of our, being a Steam Machine, this system runs Steam OS and comes with a Steam controller in the box. For the gaming enthusiast who isn’t quite ready to build their own ultra-compact PC, the Alpha represents a fantastic option. Both the memory and hard drive can be upgraded, but what’s really amazing is that Dell allows you to upgrade the processor as well!

The Alpha starts at $449.99 with the new Core i3-6100 dual-core processor, and will also be available with Windows 10. Availability is expected in early March 2016. Our only concern: Dell continues to equip these with hard drives as standard equipment, rather than much faster solid-state drives.

Corsair should be a well-known manufacturer to anyone even remotely familiar with the PC market, as its memory products are among the best-selling and best-performing on the market. But Corsair has branched into practically every other PC component market since establishing itself as the go-to memory vendor. In particular, it has some of the best-selling cases, power supplies, and liquid coolers on the market. 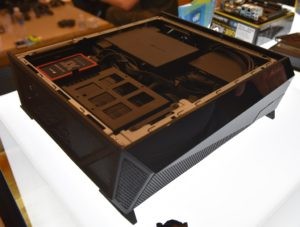 So it was only a matter of time before Corsair finally decided to put all its eggs in one basket and build out a barebones PC. That, in a word, is what the Bulldog is, but honestly, it’s so much more. Riding the wave of Steam Machines, but taking them in a different (larger) direction, the Bulldog is designed to be a turnkey solution for any PC builders looking to outfit a high-powered system that will fit in a media console. 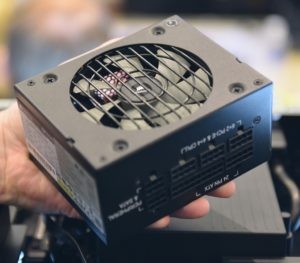 Corsair was pretty blunt with us during our meeting: building a high-performance ITX-based machine isn’t easy, and there were plenty of delays along the road to Bulldog’s release. But that right there is a perfect reason for builders to welcome the Bulldog to the small form factor ranks, because what you’re getting is a system that has been fully-vetted by Corsair. You get Corsair’s custom SFX power supply with 92mm fan for quiet operation, an amazing one-of-a-kind low-profile liquid CPU cooler custom-engineered to fit within the slim confines of the Bulldog, and of course you get a sleek looking case designed to hold big liquid-cooled video cards as well. The case will not be sold separately due to potential conflicts with other power supplies and coolers – this is how concerned Corsair is with providing its customers with a positive user experience. And in our opinion, that’s exactly the right move. The complete kit including case, custom cooler, and custom PSU will ring in at $300, which is a very aggressive pricepoint given the small form factor competition. 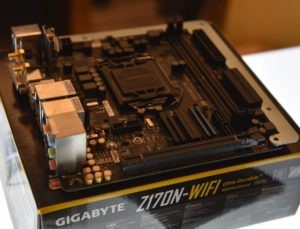 Slightly more surprising is Corsair’s decision to push a second version of the Bulldog out with a bundled Gigabyte Z170M-WiFi motherboard. Corsair is able to provide a discount on the motherboard of nearly $50 (adding it to the Bulldog costs only $100), and Corsair’s view is that including the motherboard is what makes this a true barebones system, rather than just a collection of parts in a box. It also ensures that the motherboard actually fits in the case and works with the liquid cooler; some ITX models may have IO ports or daughterboards that would conflict with the cooler. Ironically, Corsair’s own high-profile Dominator RAM series is incompatible with the Bulldog’s cooler – Corsair recommends the use of its Vengeance LPX line.

In our opinion including the motherboard is a slightly risky move, because motherboards have among the highest RMA rates of any PC component, so Corsair may find itself fielding a lot of customer inquiries about a product that isn’t its own. Then again, Corsair does have some of the best customer service in the business, so prospective buyers may view the bundle as giving them an extra degree of confidence regarding their motherboard’s functionality.

Update: The Bulldog is available for pre-order from Amazon for  $299.99.

Small but daring company In-Win has made a splash with its big, bold, and beautiful tempered-glass cases, but also knows a thing or two about aluminum. So it’s isn’t too much of a surprise that it’s updated its existing ultra-compact ITX design with some snazzy machined updates. We’ve previously reviewed the BQS656 and found it to be a great all-around office PC case, and this new version gives it more visual appeal. 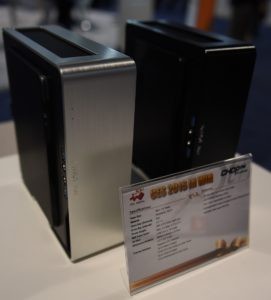 In-Win has also updated the case with a 150W internal power supply, up from the original 120W external unit. In-Win is not planning an external PSU model this time around, and has said certain customers requested the larger power supply. In our opinion, this is a spec upgrade designed for marketing purposes, as it’s impossible to build a system that will use more than 120W in a case this small, and customers asking for a larger power supply probably don’t realize that. The fact that the case will retail for $110-$120, up from the current model’s $80, has us slightly concerned, but for some buyers, the sleek metal cladding alone may justify the price. Alas, the most important update was the simplest: changing the name from BQS656 to Chopin. Now that’s a major upgrade!

Moving from one of the smallest purveyors of small cases to one of the biggest, we end with Silverstone. Offering more ITX cases than all of its competitors combined, it’s hard to imagine searching for a small form factor case without seriously considering one of Silverstone’s models. And now you’ll have a few more to choose from. 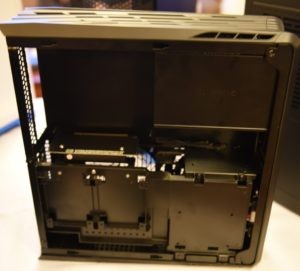 First, Silverstone “evolves” its Raven RVZ01 chassis with the RVZ01-Evolution, which improves upon the older model in a number of ways. Jettisoning the seldom-used 3.5″ drive bay and slot-loading optical drive bay allowed Silverstone to make room for full-size ATX power supplies, up to 150mm deep, along with four 2.5″ internal drive bays. That allows builders to move up in capacity while reducing the price and the noise output. And unlike the slimmer RVZ02, the RVZ01-E still has the cooling capacity for seriously-overclocked CPUs, making it the better choice for gamers looking to build themselves a console-killer. 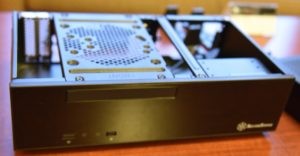 Next up is the ultra-compact ML09, the smallest case that will allow the use of the most powerful low-profile video card on the market, the MSI GeForce GTX 750 Ti. It borrow the basic layout of the ML06-E announced last year but never released. The ML09 dispenses with the ML06-E’s slot-loading optical drive bay and replaces it with a standard laptop-style drive bay. 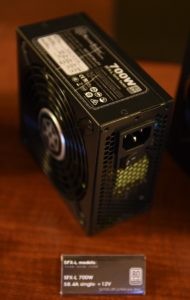 We are really, really glad Silverstone is finally listening to its customers in this regard. Buying a case for $65 and then realizing you need to spend the same amount of money just to equip it with an optical drive is a major buzz-kill! The ML09 should be ultra-popular with HTPC users as well as gamers looking to build a Steam Machine more powerful than any other on the market.

If you’re using one of the few cases that can accept an SFX-L unit, like the original RVZ01 and recently-released RVZ02, Silverstone may be able to tempt you with its new mind-blowing Platinum-rated 700W unit, although based on our conversation with Silverstone’s rep, we think Silverstone has realized that most users would simply prefer going ultra-small with SFX or having the option to go with a common ATX format. But Silverstone isn’t leaving you in the lurch when it comes to powering up the ML09 and other Silverstone cases requiring SFX power supplies: it’s stepping up with two SFX units at 500W and 650W that feature fully-modular cables, Gold-rated efficiency, and a new 92mm fan, providing better cooling and lower noise levels than the previous models’ 80mm fan. 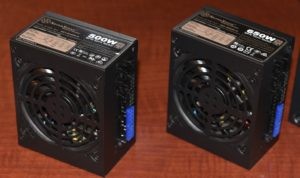 All in all, we’re really pleased that Silverstone is serious about increasing inter-operability with industry standards, while still offering solutions that can fit more gear per square inch than any other manufacturer on the planet.