Dell and Lenovo’s Race to the Lap-Top

Dell and Lenovo’s Race to the Lap-Top 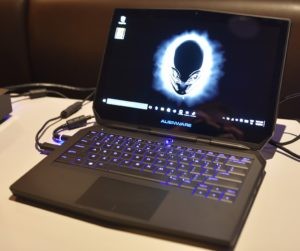 The two companies dominating the charts when it comes to laptops faced off directly at CES 2016, right down the hall from one another. Lenovo is known best for its ThinkPad line, long ago purchased from IBM and still the benchmark by which all others are judged. Dell was proud to show that it had a very deep product line, from cutting-edge laptops to VR gaming machines to ground-breaking monitors.

Dell had an impressive array of products on display for 2016, proving that it hasn’t lost a step since going private last year. One of the most notable products on display was Alienware’s new 13 OLED laptop, the very first gaming laptop on the market with an OLED display. Amazingly, Dell hasn’t had to bump the price despite moving from the previous QHD+ display to this QHD OLED model. Yes, you lose a bit of resolution, but the incredible response times and contrast ratio make it a much better pick for a gaming laptop. How does a 1-2ms response time, 100,000:1 contrast ratio, and a mind-blowing 104% color gamut sound? In our hands-on demo of the laptop, the colors were incredibly rich and deep, well beyond anything we’d seen before. Dell is targeting a March release and a retail price of around $1,500. 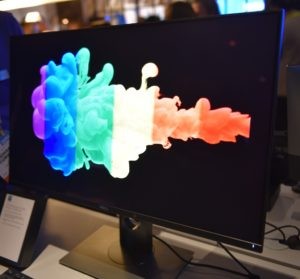 Also featured was Dell’s absolutely jaw-dropping UP3017QA. Now, we have to admit that the product name isn’t too catchy, but let’s just ignore that and get to the specs: it’s a premium Ultrasharp 30″ Display, featuring a 4K OLED panel with an absurd 400,000:1 (the highest that can be measured), 0.1ms response time, full 100% Adobe RBG coverage….and a price of $5,000. Obviously, this isn’t a product for the average consumer, but for content creators, it is quite simply the ultimate monitor.

We pulled one of Dell’s monitor engineers aside to ask a bit where Dell is going with more gaming-focused monitors, and they admitted they’ve been a bit slow to jump on the G-Sync/Freesync bandwagon, instead relying on its Ultrasharp line of 60Hz monitors, which had long been popular with gamers, to satisfy the gaming market. Of course, that was only going to work for so long, and Dell is indeed looking to move beyond its single entry so far, the S2716DG, which uses a 144Hz-capable TN-based panel. While nothing’s official yet, it sounds like we can expect to additional gaming-focused monitors from Dell later this year (notably, not using the Ultrasharp branding). 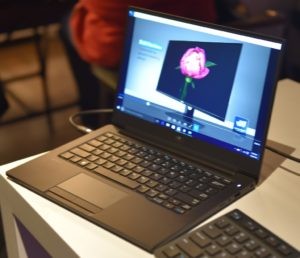 Outside of the OLED realm, Dell also had some pretty impressive business-oriented products, including its amazing new Latitude 7000-series 14″ laptop, which Dell is marketing as the lightest “business laptop” in the world at 2.48lb. We asked Dell what the benchmark for business laptops was, and not surprisingly its the Lenovo Carbon X1. The Latitude is based on the XPS13, which stole the show last year, and looks to have pushed the design a step further in terms of both weight and thickness. Dell is targeting an early-March release date. 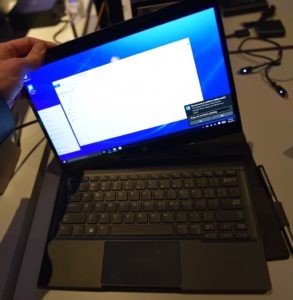 Also on display was the 7000-series tablet, which Dell is calling the world’s lightest 12.5” 2-in-1. It features a 4K display with Gorilla Glass and a sleek magnesium alloy frame. In addition to being dockable on its included keyboard, it can also be docked to a separate monitor dock, providing a truly across-the-board computing solution. Its magnetic mechanism allows one-handed detach, and at 2.8lb and 15mm thick, it’s quite portable. 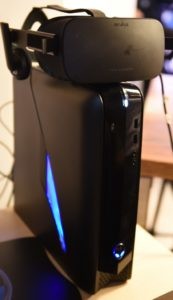 Dell was also kind enough to let us try out a production-ready version of the Oculus Rift Virtual Reality Headset on an Alienware X51 slim desktop sporting a GeForce GTX 970 video card. Dell is in the process of getting the Alienware X51 certified as Oculus-ready, and their engineers informed us that the GTX 970 is just about the minimum card you’ll want to use to get the most out of the Rift. The VR experience, as demonstrated with Lucky’s Tale to be included with the Rift, was most definitely a unique experience. Being able to get a 360-degree view of the game world was pretty amazing, although doing so while moving the character did induce a bit of vertigo.

VR is going to be something that people have to learn how to use – it’s not quite as simple as viewing content on a screen. But judging from the long lines of showgoers waiting to try the VR experience, it will be a hot topic for quite some time! We checked out Lenovo’s showcase right after visiting Dell, which was incredibly easy since they were actually next door to each other. It’s not clear that they intended for this to happen, but given that they are two of the biggest names in the PC industry, conducting some back-to-back comparisons was pretty tempting. 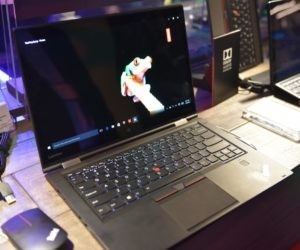 While the latest 2.6lb. version of the class-leading 14″ X1 Carbon, shown above, was on display, it was overshadowed a bit by its cousin, Lenovo’s 14″ Thinkpad X1 Yoga. This business-class convertible features an OLED display, a keyboard that retracts when the device is flipped into tablet mode, and a weight of just 2.7lb. It was indeed an awesome-looking product, borrowing the 360-degree hinge concept form the Lenovo IdeaPad Yoga line but enhancing it for durability. The screen was truly beautiful, and it was interesting to see that Lenovo’s first foray into OLED displays was on a tablet, as opposed to Dell’s use of OLEDs on its Alienware gaming laptop.

One thing’s for sure – OLEDs are going to find lots of uses. But here’s a fun fact that might put a damper on widespread adoption: OLEDs apparently burn through batteries with white backgrounds. Luckily for Lenovo, it chose black wallpaper to run as default on its X1 Yoga! If we were to call a winner between Dell’s Latitude line and Lenovo’s X1 line based on first impressions, we’d have to hand it to Lenovo for continuing to innovate, even if Dell’s Latitude just edges out the X1 Carbon in terms of weight.

In the gaming realm, Lenovo is trying its hand at a serious gaming desktop with the Y900 Razer Edition (RE), planned for release in June 2016. The partnership with Razer means you get competition-caliber Razer peripherals in the box with the Y900, as well as Chroma RGB lighting on the case. But performance is what ultimately counts, and Lenovo hopes to bring it with an Intel Core i7-6700K quad-core CPU and dual Nvidia GeForce GTX 970 cards running in SLI. That’s definitely a pretty aggressive setup for a major manufacturer like Lenovo, so it will be interesting to see if this configuration actually makes it to market. Lenovo’s representative promised us that these high-end gaming machines would be hand-assembled with neat cable routing as befits a high-end system meant to be shown off. Lenovo is just now jumping into the gaming desktop arena, which Dell has long-occupied with its Alienware sub-brand, and it remains to be seen whether Lenovo can achieve similar levels of success. 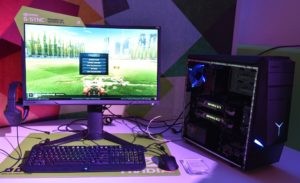 Clearly visible in the photo above is Lenovo’s new G-Sync Monitor with Chroma LED lighting. Curiously, the lighting is only visible on the back of the monitor, so it’s going to be of limited usefulness to folks whose monitors are up against a wall. But it would look very cool sitting on an executive-style desk in the office! No word on the specs or pricing of the monitor as of yet. We actually spoke to Razer about this product, and what they were most excited about was the flip-down headphone hook. Simple solution to a big problem!