Somewhat surprising lack of LEDs on the headset; Corsair software is clunky as always; styling may be too “gamer” for some, especially mobile users 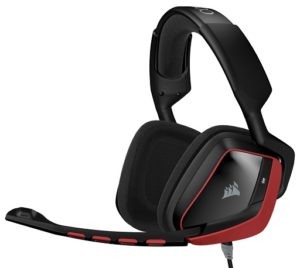 It’s funny seeing the evolution of headsets in the consumer electronics industry. Headphones have been around a really, really long time… would you believe it’s been over 100 years since their introduction?!? Clearly, it’s the oldest tech you’ll see in the PC industry, so manufacturers have had a big chunk of time to get it right. But what can they possibly bring to the table that hasn’t been done before? Corsair is here with its Void Surround headset to answer the question!

We’d like to extend a special thank you to Corsair for providing this review sample.

First off, the Void Surround has a retail price of $79.99, which puts it firmly in the heat of the battle for mid-range headsets. It also offers licensed Dolby Headphone processing, which provides virtualized surround effects via a USB adapter (for PC only). and then it has the 3.5mm stereo connector for all your other devices, including game consoles and smartphones, which must get by with simple stereo (as each headphone can only has a single driver). But my, oh my, those drivers! They’re 50mm, making them far larger than what you typically get at this price range, and as we’ll discuss on the next page, that really makes a difference. In terms of getting a handle on those drivers, Corsair keeps it very, very simple: the only onboard controls are a volume dial, which is accompanied by a mute button for the microphone.

Speaking of the microphone, the swinging boom mic is what makes this a true headset, rather than just headphones. And for gamers, that’s a must. The boom mic folds up and down, but doesn’t store neatly away like the units on many competing headsets. That makes it a bit too “gamey” in our opinion for the more general audio-listening audience. It does have one really cool trick up its sleeve, though, and that is that you can actually bend the boom itself to position the mic just the right distance from your mouth. That’s a great feature we haven’t seen before, and it prevents the dreaded feedback or low voice volume that are so common with typical boom mics.

Another unique feature on the spec sheet is integration with Corsair’s RBG line of peripherals, which allows you to set up your keyboard and mouse to act as visual graphic equalizers for your headphones. While that sounds kind of cool, we didn’t have an RBG peripheral to test with, and in the end, this is probably a bit of a one-trick pony. We doubt a lot of users will find it essential, and given the effort Corsair likely put into this feature, it’s really surprising that the Void Surround doesn’t feature any lighting of its own, a glaring omission for a headset playing in the gaming arena. 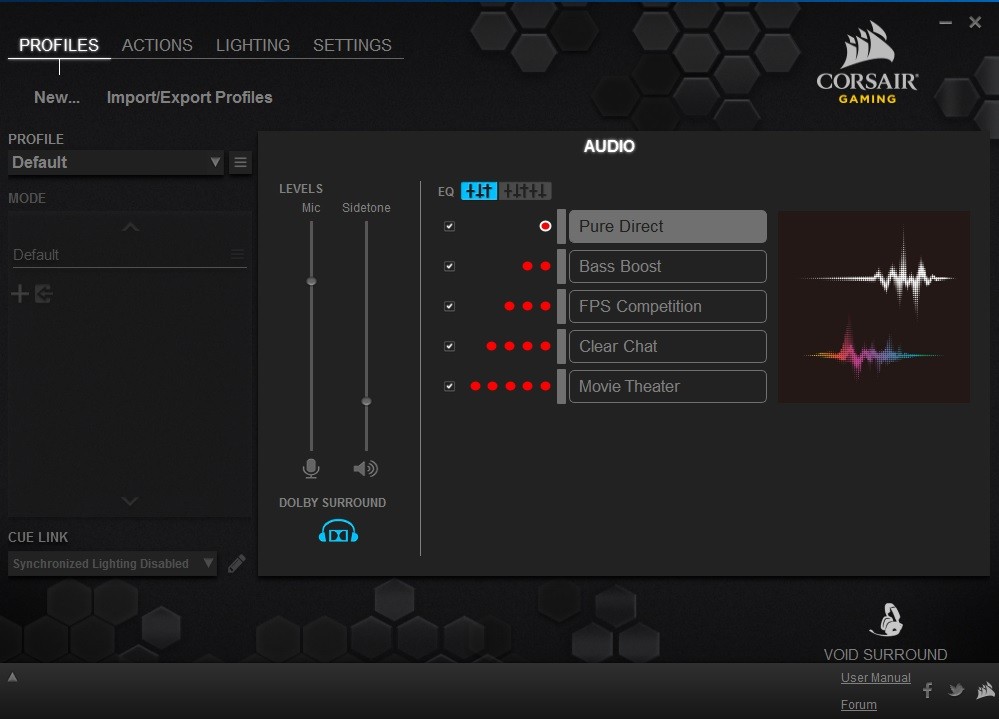 And to get all the hocus pocus to work, you have to interact with Corsair’s Utility Engine (“CUE”) software, which isn’t just unattractive, it’s also pretty unintuitive. Corsair is a master at developing great gaming hardware let down by super-clunky software. The CorsairLink suite for liquid cooler and power supply monitoring comes to mind. Anyway, we’ve used CUE before in our Corsair Strafe Keyboard review, we didn’t like it then, and it hasn’t improved at all from what we can tell. In the end, we just loaded it up to enable Dolby Headphone surround processing and then never returned! 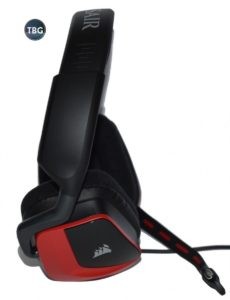 Back to the good stuff, no discussion of headset features would be complete without touching upon comfort. The Void Surround has lightweight on-ear cups, and interestingly, instead of being the typical oval shape, they’re somewhat ear-shaped. How novel! We found that they fit our ears quite well, actually, without any noticeable pressure points. They’re padded with a cloth-like material (rather than pseudo-leather that you’ll find on some “audiophile” brand headphones), and while they don’t have a particularly luxurious feel, they seem comfortable and durable enough.

The one really unusual aspect of the design is the forward-swept headband. It reminds us of the experimental Grumman X-29 fighter jet, which never made it to production. We assume Corsair didn’t choose the design for aerodynamics, but perhaps it did in fact choose the design for stability. It’s possible that perching the headphones toward the front of your head allows them to stay better balanced, and less likely to slip off the back. We didn’t jostle them enough during testing to really prove this point, but we will say they look a little funky in use, and that may mean users won’t be rushing to rock the latest headphone style on the bus or subway!

One last element of the design that is probably a case of function over form is the Void Surround’s thick stereo cable. It likely pays off in terms of transporting the full audio spectrum unimpeded towards the user’s ears, but it certainly won’t wrap up neatly in your coat pocket when walking the streets. This is clearly a headset meant to be used at a desk, rather than taken around town, a shame given how good it sounds for audio playback, as we’ll discuss next. 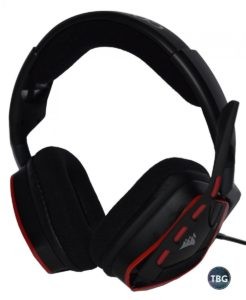 We put the Void Surround to the test in three challenging playback scenarios. First, we listened to a lossless FLAC file of Beethoven’s Ninth Symphony, as recorded by the London Symphony Orchestra and as processed by our Asus motherboard’s high-end audio codec. We then listened to Adele’s epic new release “25” via our HTC One M8 smartphone. And finally, we put the Void Surround through its paces in an online game of Battlefield 4, which is likely the kind of use Corsair had in mind when designing the Void Surround.

First things first: the Void Surround sounds fantastic! We were amazed at how it brought to life the London Symphony Orchestra, with the booming bass drum that sets the Ninth Symphony apart from all others, and precise positioning of various sections of the orchestra, as enabled by Dolby Headphone processing. We toggled it on and off, and it truly did improve the soundstage and overall listening experience.

In sampling to Adele’s 25, we were amazed at how much better the Void Surround sounded versus a few reference headphones we have on hand, from the likes of Logitech and Audio-Technica, both which retail for over twice as much. We think it comes down to one thing: driver size. The Logitech and Audio-Technica models we used had 40mm drivers, but had other key features, such as wireless operation and noise cancellation, respectively. The Void Surround’s focus on sound, courtesy of its big 50mm drivers, puts it in a different category all together. The drawback here is two-fold, however: our reference headsets were quite a bit more streamlined in terms of exterior design, and furthermore, they could play louder. Turns out powering 50mm drivers is pretty tough for a smartphone, even one with as good an audio chipset as the HTC One M8’s. That being said, the loudest setting was probably right at the high end of “safe listening levels”, so perhaps this is a blessing in disguise. If you want others to hear your music coming when you’re walking down the street, look elsewhere, but if you want full-bodied sound from a seriously-powerful set of cans, the Void Surround will deliver.

Finally, there was the gaming test. In Battlefield 4, The Void Surround headset allowed for a fatigue-free gaming experience unlike the other headsets we compared it against, which were simply too treble-heavy. That can get annoying when explosions are coming hot and heavy. Again, the Void Surround wasn’t particularly loud at a given volume setting, but it sounded really, really good. And engaging Battlefield 4’s surround encoding clearly made a difference versus the standard stereo setting – the game arena opened up, with positional sound effects clearly highlighted.

There’s just no doubt about it – the Corsair Void Surround is a killer headset for the price. It offers cross-platform compatibility, Dolby Headphone processing via USB for PC users, and absolutely stellar sound quality. It actually beat out two headsets that we compared it to back-to-back in that regard (if not necessarily in terms of features and design). The bass is extraordinary, thanks to the big 50mm drivers, and comes across as real, not boomy, so it will enhance your listening experience without giving you a headache. And that bass is what makes it so great for gamers and music lovers alike. Finally, we were especially impressed at how the Dolby Headphone setting enhanced our lossless recording of Beethoven’s Ninth Symphony. That’s not an easy piece to reproduce via headphones, but the Void Surround did it, and engaging the Dolby Headphone setting really placed each section of the orchestra in a different spot in the listening plane.

But as always, there is no such thing as perfection. The cable is ultra-thick, making it cumbersome for use on-the-go, and the big boom mic and gamer-centric styling make it even more unlikely the Void Surround will be anyone’s go-to travel headset. We’re also not quite sold on the forward-swept headband. Only time will tell if it actually makes the headset feel more balanced and secure. But that’s about it – no other serious concerns.

The Corsair Void Surround was originally listed at $88 from Amazon, but dropped to a shockingly-low sale price of $59.99 on our publication date. At that price, it’s a steal, and even at its $79.99 retail price, it’s a winning kit.