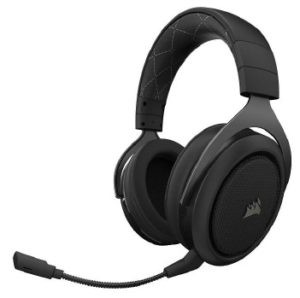 We’ve tested a lot of headsets lately, so many in fact that we sometimes forget which model we tested last. The number of new headsets that have hit the market over the past few years is a sure sign that there’s plenty of demand for feature-rich models, and in turn that there are many choices from various manufacturers. So it didn’t surprise when Corsair reached out to us about another new headset, the HS70 Wireless. What did surprise, however, was the price: hitting the market at $100, this model arrives as part of Corsair’s budget-oriented HS lineup rather than its gamer-focused Void lineup, and yet it’s packed with features, starting with that wireless bit we mentioned.

Now, Corsair is no stranger to gaming peripherals, and as far as we’re concerned, it has the gaming keyboard market all locked up. At this point, there’s little reason to buy a keyboard from anyone else. But it’s had its fair share of stumbles in the mouse and heaset market, as we’ve previously found its M65 mouse only mediocre, and its original Void headset below average. Hey, nobody’s perfect, but has Corsair learned anything new when it comes to headset tech that can put it over the top? Read on to find out!

Special thanks to Corsair for providing a sample of the HS70 Wireless Gaming Headset for this review.

The specifications for the HS70 are incredibly impressive given the price, which sits comfortable in the range of similarly-spec’d wired headsets. That includes 50mm drivers, virtual 7.1 surround processing, and a removable boom microphone. Of course, being wireless, however, you also get a built-in battery, good for up to 16 hours of run time according to Corsair, as well as a 40-foot range, which is pretty standard for proprietary wireless. Note that this is not a Bluetooth-compatible headset, and requires the use of the included USB dongle.

The HS70 weights 340g according to our scale, which makes it the heaviest wireless headset we’ve ever tested. Chalk it up to simple but heavy-duty metal construction. Whether that’s a pro or a con comes down to the individual user, but since we’re not too rough on equipment, we would have traded some of that metal for a lighter weight. That being said, a number of headsets we’ve tested in the past have felt flimsy, with creaky joints and cheap-feeling plastics, which the HS70 thankfully avoids. 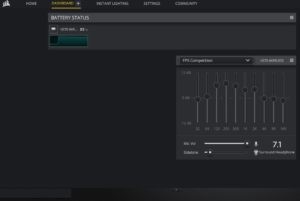 To get the most out of the HS70, you definitely need to download the latest iCUE software from Corsair, which integrates all the functions of several older software suites into one system. In addition to the stereo/surround selection button, it had a great feature hidden away in the “Dashboard” tab: the battery meter. You could go a long time using the HS70 without ever realizing that there was actually a way to know how much battery life you have left! Another cool Easter egg: once you install iCUE, the HS70 is endowed with voice prompts like “initiating auto power-down”, “7.1 Surround”, and “microphone muted.” It’s very cool, but only available if you’re running the HS70 with iCUE in the background. Without iCUE, you just get far less informative beeps for button presses.

Interestingly, although one of iCUE’s main functions is to control RGB lighting, the HS70 has no lighting whatsoever. If you’re a fan of RGB effects, that may be a let down, but we honestly welcome it as a breath of fresh air in the headset market. That’s not because we dislike RGB lighting; to the contrary, we love it, but we’ve found that lighting on headsets is simply counter-productive. It drains precious battery life, while adding little to the user experience, given that headsets are typically situated on, you know, the user’s head!

In the video below, we provide a full overview of the styling and features of the HS70, as well as an evaluation of the onboard microphone, which we used to record the audio!

Hopefully that video sums up just about all of the HS70’s features, so let’s jump into the discussion of performance. 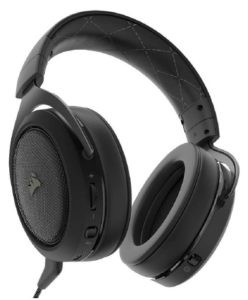 When it comes to performance, comfort and fit may be the very first thing you’ll notice when using a headset. We’re happy to say that overall, the HS70 doesn’t disappoint. The padded earcups feature a leatherette material that felt well-cushioned while still being reasonably breathable. While “sport mesh” is often touted by competing headsets as better for intense gaming sessions, it’s  invariably less comfortable due to the somewhat scratchy texture. In terms of the the shape of the earcups, Corsair continues to buck the trend, not all that different from what it did with it’s oddly-shaped trapezoidal cups on its Void headset lineup. This time, Corsair goes with a more traditional oval shape, but the earcups are incredibly large, and similar to the Void line can completely surround the ear without touching it. This may or may not be advantageous, depending on the user, but we felt that it made the HS70 feel just a bit too big.

Another source of fitment issues was the fact that the HS70 has a very limited swivel range, meaning the earcups just don’t conform that well to the head. With so many competitors featuring full 90-degree rotation, the approximate 5-degree rotation limit of the HS70 does not impress much. It also means that resting this headset around your neck is quite uncomfortable, helped little  by the hard-edged aluminum yokes.

We actually found it somewhat surprising that Corsair didn’t get the fit right despite the use of so many premium materials (metal mesh on the outside of the earcups, leatherette material inside the earcups, clean stitching on the headband, and those aforementioned yokes). We hate to say it, but perhaps it’s because Corsair is better at designing computer components than wearable gear. Put another way, the HS70 feels like it was designed via CAD rather than with human testers.

With that out of the way, we can talk about sound quality. Given the big 50mm drivers and hefty build quality (and weight), the HS70 was able to belt out some impressive sounding bass, as well as a solid mid-range. It was easily the equal of its more expensive wireless competitors in terms of music quality, representing itself really well in “Hello” by Adele, which is our go-to test track for all headsets. That being said, while it’s impressive that Corsair fit virtual 7.1 surround onto the HS70’s spec sheet, our overall impression is that it’s a relatively weak implementation of the concept. Lacking any licensed system like Dolby Surround DTS Headphone X, it did little to add the immersion to our gaming that fully-licensed headsets have in the past. Furthermore, it really thinned out the sound for music, so much so that we’d strongly recommend leaving it off for anything that isn’t encoded in surround, and consider using stereo for games as well. We also wish that Corsair included a button on the headset to easily switch between the two modes; the only way to do so is to select the mode in software.

During our testing, we had no wireless dropouts, but we did experience a bit of buzzing on the first sample we tested, caused by the headphone’s wireless system (it stopped whenever we pulled the USB dongle from our PC). The second sample we tested was buzz-free, and we sent our first sample back to Corsair for its engineering team to “dissect.” Hopefully it was just a one-off problem. Overall, then, we’d say the wireless fidelity is top notch.

Overall, there was a lot to like about the HS70, starting with the fact that Corsair is now offering a solid wireless headset for the price of its competitors’ wired headsets, which gives enthusiasts a fantastic new option they’ve never had before. The materials choices and build quality are excellent, the 50mm drivers come through with full-bodied sound, and the battery life is very impressive (helped in part by the lack of RGB lights). The HS70 isn’t perfect, however, as we found the fit to be less than ideal, due to the overly-large earcups and minimal swivel range, and we were also a bit disappointed with the weak surround implementation.

But if you’re after perfection, you ought to be targeting a much higher price bracket than the one the HS70 resides in. With an MSRP of just under $100, the HS70 is nearly in a class by itself, with most wireless gaming headsets targeting the $150 pricepoint. Note that the HS70 does have one direct competitor: the Logitech G533, which Corsair was no doubt aware of. While it debuted at $130, it has since dropped down below $90, and we view it as the most serious rival to the HS70. Overall, its sound quality doesn’t match the HS70, and it feels a bit less premium in terms of materials, but it’s quite a bit lighter, and has a cool flip-down mic that we really like. It also has similar battery life to the HS70. It’s a toss-up between the two, with each having distinct pros and cons, and to get a truly superior package, you’ll need to step up a price class and go with a higher-end kit like the HyperX Cloud Flight.

The Corsair HS70 Wireless Gaming Headset is listed for pre-order at $99.99 shipped from Amazon, as of our publication date.