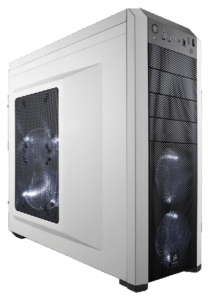 The Carbide 500R is still one of Corsair’s best selling cases, several years after its introduction, and perhaps because of its veteran status, it’s often available at much lower cost than similar cases in Corsair’s lineup, not to mention the offerings of other manufacturers. We’ve been recommending Corsair cases in our Build Guides for a long time, and the 500R was once the primary case recommendation in our $2,000 Premium Gaming PC Build Guide. We decided that it would be worth taking another look at the 500R, now that so many of our readers own one!

The Carbide series is intended to fill the void between the gamer-centric Graphite series and the more buttoned-down Obsidian series. So you get to have some fun, but still be taken seriously when people come over and see your setup. The 500R is one of the highest-end models in the Carbide line, adding a few more bells and whistles (or more literally, fans, lights, and fan controllers) than other models in the range, while being just a step below the cube-shaped Carbide Air 540. We happen to think it’s one of the sleekest cases ever released by Corsair, but of course beauty is in the eye of the beholder.

Much of what makes Corsair cases so popular is Corsair’s focus on building cases that are, well, easy to build. Things like rubber grommets for the cable cut-outs, side panel thumbscrews that are affixed to the panel to avoid misplacement, and tool-less drive bays are the order of the day.

The 500R is 20.8″ deep, 9.1″ wide, and 19.75″ tall. What’s that you say? Oh, Corsair lists the case as 20.5″ x 8.1″ x 20″, and you’re wondering how we came up with our numbers? An old-fashioned measuring tape, or course! The biggest culprit in Corsair’s fanciful numbers is the fact that Corsair has not included the bulging side panels in the width of the case, as if you’re going to run the case with the panels off. While this oversight isn’t critical for everyone, if you’re working with limited desk space, every inch counts, so we wanted to give you the full picture here. Frankly, we think those sculpted side panels are what make this case stand out style-wise, so we’re not complaining. They also serve the very useful function of adding additional space for the huge 200mm fan on one side and room for cable management on the other side without giving the case a massive footprint, which it would have had if the whole thing were punched out to 9.1″ wide. So, overall, we like what Corsair has done with the case, but have some concerns about the accuracy of their product measurement team. 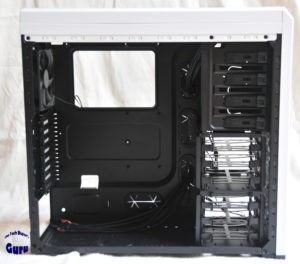 Inside the case you’ll find a very modern layout, with plenty of big, grommeted cut-outs for cable management, one huge cut-out for installing your CPU cooler, and two removable hard drive caddies with three sleds each. Of course, the sleds accept both 2.5″ and 3.5″ drives, and in fact we built up our sample using only 2.5″ drives, which we think will increasingly become the norm on desktops. Eventually, we’ll be able to jettison the space-hogging 3.5″ drive bays all together, but the 500R isn’t that cutting-edge. You also get four tool-less 5.25″ external drive bays, which we did not have occasion to test in our build session, as we didn’t install any drives of that size either.

The 500R comes equipped with two USB 3.0 ports on the front panel, headphone and microphone jacks, a Firewire port that was all the rage in what, 2010, maybe, and switches for the case fan LEDs and the 3-speed fan controller. Note that three of the fans used by Corsair in the 500R (the dual front 120mm fans and the side-mounted 200mm fan) utilize a proprietary connector, so that fan controller and light switch will work with the included fans and no others. The unique connector was likely necessary to add the fan LED control along with fan speed control on a single wire. Again, we’re not complaining – just letting you in on the facts here. The fans are of very high quality, and at the lowest speed setting are truly silent.

At the rear of the case, you can see a continuation of the black and white theme (very sleek, in our opinion), along with the rear-mounted 120mm fan. It’s the only fan included that uses a standard 3-pin connector, and it’s also the only fan among the four pre-mounted in the case without LED lighting. You also see eight, rather than seven port covers on this case, which is an indication that the 500R can accept 8-slot E-ATX motherboards. The back panel also provides four cut-outs with grommets for external water cooling loops for all you DIY cooling enthusiasts. Finally, you’ll see the power supply cut-out at the bottom of the case. The power supply can be mounted fan-up or fan-down, and Corsair includes a high-quality mesh dust filter at the bottom of the case to reduce the amount of debris pulled in by the power supply fan.

Another unique feature of the 500R is its pop-top, which we’ve provided a close-up of to the right. The mesh top of the case is actually mounted using a pop-up latch, allowing you to remove the cover to expose the roof cavity of the 500R. It’s custom-designed to house one of Corsair’s CPU cooling radiators, such as that of the Corsair Hydro H100i, which we’ve installed in this photo. The fans for the radiator are actually installed inside the case, but are screwed directly into the radiator through the case’s included fan mounts. Again, a very slick detail, and one that can probably be used with just about any manufacturer’s 120mm or 240mm radiators. Note that a 280mm radiator will not fit in this roof cavity, so models like the Corsair Hydro H110 are a no-go. 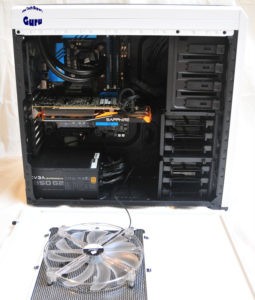 Building up the 500R is about as easy as it gets. The generous number of motherboard cutouts really make it a breeze to manage the cables, and there’s more then enough space in the case to fit just about any component you could think of. In fact, if there’s anything we can fault in the 500R, its that there’s just a bit too much room in it, leading to exterior dimensions that are probably bigger than most people really want. As you can see below, even our 12″-long Sapphire Radeon R9 290 video card fits comfortably in the case without so much as requiring removal of a hard drive caddy, and this is one very long video card. We’d reckon that the 500R could be about an inch shorter from front to back and most builders would never miss the lost interior space. Maybe it has something to do with accommodating E-ATX motherboards, but that’s a very niche market, one that Corsair could probably target with its Obsidian series of cases.

We’ve included in the picture to the right a shot of that big 200mm side fan, with the necessary fan power lead running into the case. That makes installation of the side panel just slightly awkward, as you have to make sure the cable doesn’t get pinched between the panel and the case, but it’s a necessary evil if you want a side fan mounted in your case. 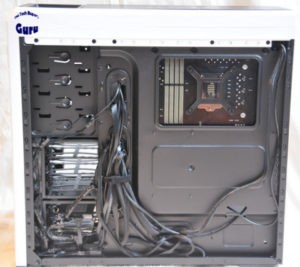 Now, no one likes to air their dirty laundry, but we’re going to go ahead and do it anyway – check out the photo below for a shot of the cabling we tucked behind the motherboard tray. We were assisted by our fully modular EVGA Supernova 850 G2 power supply (we highly recommend it, by the way!), but even so, there’s no getting around the fact that it can get messy back there. We would have appreciated a few more tie-down points built into the case, but we made do with some cable ties (Corsair includes several, actually, although we liked the ones included with our EVGA power supply more, and ended up using them instead). Also visible in the picture is the tray cut-out, allowing relatively painless CPU cooler installation and removal.

So, what about performance? Well, overall, it’s really good. We’ve only tested a few large ATX cases, along with a number of micro ATX cases, so direct comparisons are hard to make. But suffice it to say that our video card ran a few degrees cooler in this case than it did in a smaller micro ATX case that we also tested it in. The CPU ran cool as well, but that’s because we used Corsair’s effective (but loud) Hydro H100i cooler this time around.

Luckily, the case fans themselves were anything but loud, especially on their lowest and middle settings. Corsair makes some of the best fans on the market, so these aren’t just cheap throw-aways. You’ll probably want to keep them around, and not just because of that previously-mentioned proprietary connector.

One nice feature of the 500R is that its hard drive caddies are removable. A few years back, just about every case manufacturer began using hard drive bays oriented perpendicularly to the case. They did this to offer easier hard drive removal, with the slight trade-off of reduced airflow from any front-mounted fans. Luckily, if you don’t need to install more than three drives, the 500R allows you to remove the middle caddy to improve airflow to your video card and the rest of your system’s components. 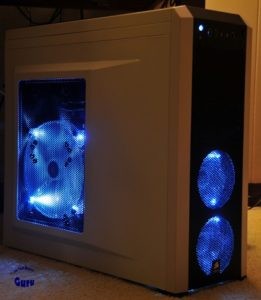 So overall, cooling is above-average, noise is kept to reasonable levels, and the build process went very smoothly. Oh, and the case looks great standing still or running full tilt with its cool white LED lighting engaged (the LEDs can be turned off with the push of a front-mounted button, of course). Honestly, we tried and tried to find things to criticize with this case, and we’ve come up with only two: it’s a bit larger than necessary for most builds, and its front-mounted Firewire port will almost certainly go unused, given that the Firewire connector is basically obsolete. That’s about it. Sure, there are newer cases, many of which in fact take the approach of less is more (fewer 3.5″ and 5.25″ drive bays is definitely becoming the norm), but if you don’t mind a case that you’re pretty unlikely to ever completely fill, the Carbide 500R is an absolute dream pick. In fact, it’s often on sale, so keep your eye out for a deal on this older but still very cutting-edge case. As of our publication date, it’s available at Amazon for $119.99.

If you’d like to build your own system using the 500R, have a look at our $2,000 Premium Gaming PC Builder’s Guide, which provides a parts list that will drop right into this case and provide great performance.