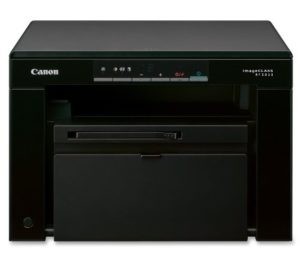 The Canon MF3010 is a very compact laser printer, ideal for personal use. At 14-5/8” wide, 10-7/8” deep, and only 10” high, it will fit just about anywhere a small inkjet would, but it gives you the full capabilities of a multifunction laser printer, including color scanning and copying, along with fast and good quality grayscale prints. Due to its compact size, it looks almost elegant when placed on a desk, that is until you open its paper trays.

Because it does not have a built-in paper tray, to load paper into it, you must fold down the paper input slot. This requires more desk space, and with the slot open, the printer is actually 14-3/4” deep. The slot can hold about 150 sheets of paper, but this paper will be extending outside of the printer, so it will collect more dust and other debris than if it were in an internal paper tray. Because the printer is so shallow, it doesn’t have a built in paper output tray, and unless the retractable flaps are extended, printer sheets will likely fall out of the front of the printer once completed. Combined with the fact that the printer also requires about 2” of clearance behind it for attachment of the power cord and USB cable, it’s very compact depth measurement is a bit deceiving, but at least it can be folded up to take up less desk space when not in use.
It ships only with a CD-ROM, manual, and a power cord. A USB cable will need to be sourced separately. 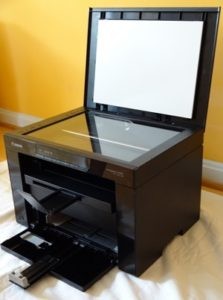 The MF3010 has a fairly rudimentary “control panel,” consisting of only an LED display for the copy count, along with dedicated buttons for setting the number of copies, initiating copying, and cancelling a copy or print job. Compared to the graphical displays of many inkjet photo printers and even the multi-line text displays of more expensive all-in-one lasers, it’s quite basic. More functional is the Canon Toolbox that can be installed from the CD-ROM or from the Canon website. This software allows you to make more sophisticated scans, including black & white (not recommended except for plain text), grayscale, and full-color scans, outputting JPEGs, PDFs, or other formats. And while only one page can be scanned at a time, the software enables multi-page documents to be scanned into one PDF file. Of note, the MF3010 cannot produce automatic duplex prints, nor does it have any built-in networking capability.

The MF3010 uses the Canon 125 toner cartridge, which yields 1600 pages and retails for around $90, but can be found for less. It ships with a starter cartridge of undefined capacity. Overall, the toner costs are above average for laser printers in this price class.

In regard to speed, the MF3010 starts up almost instantaneously upon turning it on, and also initiates jobs immediately once you press printer. The printer printed a simple 10-page Word document in 35 seconds and printed a 16-page PDF with text, graphics, and photos in 55 seconds. Scans and copies were also relatively quick. Print quality was good, with text having only slightly rough edges, far better than most inkjets, but perhaps slightly below average for a laser printer. Graphics appeared accurate if a little dark, and grayscale photos were of below-average quality. Ultimately, the MF3010 really excels more as a text printer than anything else, although it can print graphics and photo for personal or internal office use. One impressive aspect to the Canon’s performance is its incredibly quiet operation. It makes some noise a startup, and is audible during printing, but it’s far quieter than just about any other inkjet or laser printer. Probably working in its favor is its lack of moving parts versus color inkjets or more sophisticated lasers.

Overall, whether the Canon MF3010 is right for you depends on your needs and the price. It can be found on sale for well under $100, but the average selling price is over $100, which puts it in competition with a number of other worthy competitors. Its greatest attribute is its tiny footprint, which is great for small spaces, but which doesn’t accurately reflect its size during use, when the paper trays are extended. For users with only minimal printing needs, who would also like basic copying and scanning capabilities, it’s a definite winner, but anyone looking for more substantial functionality should look elsewhere.

It’s available from Amazon for around $100, as of our publication date.