Compact and incredibly easy to set up for a color laser; great functionality for the price

Print quality is slightly below-average for a laser-class product 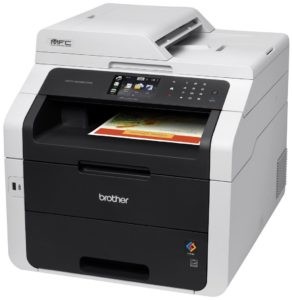 Let’s face it: the printer market isn’t what it used to be. With so many documents now viewed electronically, and even most photos never brought into the physical realm, home printers are often used more for printing the odd list, plane ticket, or rebate form. But once in a while, having a fast, high-quality printer really comes in handy, and if it’s a color model, that’s all the better. So we recently decided to pick up the Brother MFC-9330CDW, which was released in mid-2013, making it middle-aged in printer years. Given that there just isn’t too much new technology being introduced in the printer market today, many models actually stick around for five to seven years before they finally disappear from store shelves. In other words, a good printer is kind of like a refrigerator; just because a model is a few years old doesn’t mean it can’t be a top seller and a top performer. But does the MFC-9330CDW earn this distinction? Let’s find out!

The Brother MFC-9330CDW measures 16.1″ wide x 19.0″ tall x 16.1″ deep, giving it a perfectly-square footprint that also happens to be impressively small for a color laser, or any laser for that matter. Of course, some things just can’t be helped, and at 51.1 pounds, there’s no denying that the MFC-9330CDW is hefty and fairly difficult to unbox and position in your work space. That’s typical of color lasers, but it might come as a surprise to anyone used to working with color inkjets.

The three features we’ll start off with are three embedded right in the 9330CDW’s name: it features color, duplex, wireless printing! Yes, indeed, the letters in the 9330CDW’s name actually mean something, unlike the typical array of random letters that make up product names in the technology market. Note that Brother also offers a very similar-looking model called the MFC-9130CW, which as you might guess, loses the duplex function (as well as some print speed, interestingly), but is otherwise identical in design. Both have multiple connectivity options: USB 2.0, wired Ethernet, and 802.11bgn wireless networking. The fact that newer protocols like 802.11ac aren’t supported isn’t significant in terms of affecting print speed, but it does mean you have to run your shiny, new 802.11ac wireless router in mixed mode to support this printer’s wireless connectivity. 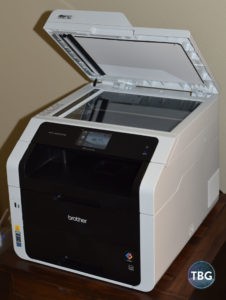 As with all color printers, the 9330CDW utilizes multiple cartridges, in this case four four independent cartridges. Note that as with many printers, the 9330CDW ships with starter toner cartridges, rated at 1,000 pages each. When it comes time to replace them, it’s definitely best to go with high-yield models, which are available in cyan, yellow, and magenta, which cost about $70 each and are rated at 2,200 pages. The standard black toner cartridge is actually a high-yield model, offering 2,500 pages for under $60. Overall, putting aside the issue of the low yield of the starter cartridges, these costs are exceptionally-low for a color laser. We should mention that the toner is bonded using a slightly different technique than most laser-class printers; Brother in fact calls this a “Digital LED” printer, rather than a laser printer, and this has both positive and negative ramifications, as we’ll discuss on the next page.

The 9330CDW has multiple paper handling options, including the large 250-sheet paper tray, as well as a flip-down manual feed input for single sheets and envelopes, and a 100-sheet output bin. It also has a 35-page automatic document feeder up top, along with a legal-sized 1200 x 2400dpi scanning bed. Scanning and copying can be initiated from the printer, although  for more control over scanning, Brother’s Control Center 4 allows scans to be initiated from a computer on which the software is installed, allowing the user to control parameters such as quality, color/grayscale, multi-page scans, and file output type.

One last thing we should note that’s hard to determine from a spec sheet: this printer is surprisingly easy to set up. The instructions are clear, and the cartridges slot right in, a far cry from some of this models’ competitors, which use clunky cartridges that never go in smoothly on the first try. We had this unit up and running in less than ten minutes (once we’d hoisted it out of the box, of course!). 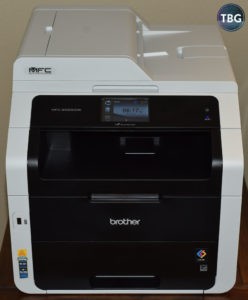 The MFC-9330CDW features an attractive, colorful 3.7″ touchscreen, which makes copy, scan, and fax functions much easier to use than on models with cryptic icons or a huge array of buttons. That being said, don’t expect this old Brother to react as quickly as a brand-new smartphone; there’s a bit of delay in the reactions of the touchscreen, which one has to get used to after becoming comfortable with the lightning-fast swipes of a modern touch-enabled device.

With regard to speed, the 9330CDW is very fast, at least after the initial warmup required to print out the first page of a document. Brother rates it at 23 pages/minute, but of course this rating comes with caveats, as do all printer speed ratings. We found that the first page of text took 20.8 second to emerge, while three pages took 26.8 seconds, meaning that it was just 3 seconds per page after the first page. In other words, quick for longer documents, not so great for one-pagers. To be fair, Brother indicates that the first time to print for color documents is 16 seconds, which falls right in line with our findings. Nothing dishonest going on here; you just have to read all the specs to know what to expect! Unfortunately, we also noticed a five-second or so delay before our documents connected to the printer, perhaps because we had it set up using the 9330CDW’s wireless functionality.

In terms of noise, the 9330CDW was reasonably quiet, with none of the chatter of an inkjet, nor the hair dryer-like sounds of some lasers. We’re betting that the LED technology used in the 9330CDW doesn’t require as much power or heat, meaning less noise as well, which is probably mostly attributable to cooling fans in other laser-class models. 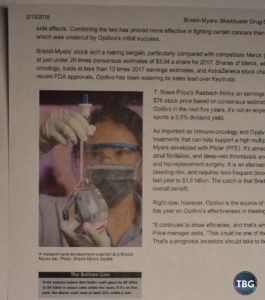 But there was one fly in the ointment for the 9330CDW: print quality. LED printers are not quite the equal of lasers in this regard, although they are still far better than inkjets in terms of text quality. We’ve included a snapshot of a mixed text/photo printout using the 9330CDW, with a portion of the text printed in an ultra-small font. There are some jaggies present, and the color photo is of typical laser quality, i.e., good enough for business use, useless for treasured family photos. Feel free to click on the sample image to get a closer look at just what we’re talking about!

The Brother MFC-9330CDW is an incredibly-functional printer, offering just about everything one could ask for, yet comes in at a very reasonable retail price of $399.99. Better yet, since its release, it has dropped in price, and as of our publication date, this printer is available for $353.99 shipped from Amazon, with high-yield cyan, yellow, magenta, and black cartridges available for $60-$70 each.

For now, the 9330CDW earns a coveted spot in our Printer Buyer’s Guide as top pick for home office multi-function color lasers, but with new models appearing every year, it likely won’t hold that position for long!