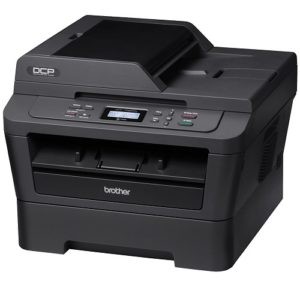 The Brother DCP 7065DN measures 16” wide, 15-3/4” deep, and 12-3/8” high. Its automatic document feeder, which is non-detachable, lends it a somewhat inelegant profile, with large hinges that stick out just over an inch behind the main printer body (included in dimensions above), as well as the document feeder itself, which precludes stacking anything substantial on top of the printer. It comes with the software CD-ROM, power cord, quick start guide, and full manual. A USB cord or Ethernet cable will need to be sourced separately to connect it to your computer or router, respectively.

As mentioned above, one of the stand-out features of the 7065DN is the automatic document feeder, which makes copying and scanning of multiple 8.5×11” pages much easier than with other similarly-priced printers that allow only flatbed scanning. The 7065DN of course also allows use of the flatbed scanner for smaller sheets, photos, books, magazines, or other irregularly-shaped documents.

The 7065DN has multiple paper handling options, including the large 250-sheet paper tray, as well as a flip down manual feed input for single sheets and envelopes. The flip down input, however, does not have a full tray, so for an 8.5×11” sheet, one must actually feed the single sheet until the printer grabs it, and multiple sheets cannot be inserted. 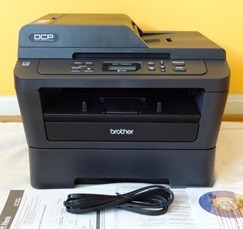 Scanning and copying can be initiated using the printer’s multi-line LCD text display and function buttons. The 7065DN can also act as a stand-alone copier. For more control over scanning, Brother’s Control Center 4 allows scans to be initiated from a computer on which the software is installed, opening up additional scanning options, such as quality, color/grayscale, and file output type. Brother also includes Nuance PaperPort 12, a scan management suite that allows a small office to catalog all of the scanning done via the 7065DN.

Another excellent feature of the 7065DN is its wired networking capability. Because it does not include wireless networking, it needs to be placed near a router to connect to the network, but the setup is painless once an Ethernet cable (not included) is used to connect the printer to a router. Each computer that will be used with the printer should have the software installed for full functionality, although basic printing can be done over the network without installing it.
Note that as with many printers in its price class, the 7065DN ships with a starter toner cartridge, rated at 700 pages. The full-size TN-420 toner yields 1200 pages and retails for $45, with a cost of just under 3.8 cents per page, while the high-yield TN-450 toner yields 2,600 pages and retails for $70, making it a relative bargain at just over 2.5 cents per page.

In regard to speed, the 7065DN takes several seconds to turn on, and also takes 3-4 seconds to warm up upon initiating any print job. Once it begins printing, however, it is quite fast. The printer printed a simple 10-page Word document in 36 seconds and printed a 16-page PDF with text, graphics, and photos in 44 seconds. Scans and copies were also relatively quick. Print quality was very good, with text having fairly smooth edges, much better than most inkjets. Graphics appeared accurate, and grayscale photos were of above-average quality. While the 7065DN is fast, it’s also fairly loud, both at startup, while printing, and even when cooling down, as its fan spins relatively loudly for several minutes after completing a print job. The printing noise is both related to the laser engine as well as the mechanical paper handling, which is fairly sophisticated, but also complex.

The Brother DCP-7065DN is a very functional printer, and can often be found at a discount. At its retail price of $200, it is certainly a good buy, but at the discounted price it often sells at, it’s probably one of the best buys in home and small-office printers on the market today.

It’s available from Amazon for $130, as of our publication date.