Modularity causes major usability issues; many aspects of the design are antiquated 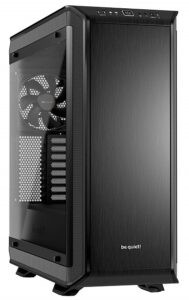 We always start our case reviews by noting that we’ve reviewed more PC cases than any other category of product, and with this review we’re up to 26. Gluttons for punishment, perhaps, given how much time it takes to review cases, but PCs are ultimately defined by the cases they use, so it’s a critically-important component to get right! Because we’ve seen so many, we have a pretty good sense of what makes a great case, and where the rest of PC cases fall behind.

Perhaps one of the most respected names among niche manufacturers in the market is be quiet!, based in Germany. Specializing in cases, CPU coolers, and fans, it has cultivated a following around the world for its excellent engineering and craftmanship. As befits its name, be quiet!’s products focus on silent computing, and the case we’re reviewing here, the Dark Base Pro 900 Rev. 2, is no different. But being the flagship of be quiet!’s fleet, the 900 Rev. 2 has a few tricks up its sleeves. The question is, however, whether the 900 Rev. 2 is more than the sum of its numerous parts, or perhaps just a little bit less. We’ll be spelling out our findings in this review.

Special thanks to be quiet! for providing us a sample of the be quiet! Dark Base PRO 900 Silver Rev. 2 featured in this review.

First off, the Dark Base Pro 900 is a very large case. According to our tape measure, it comes in at 23.25″ tall x 23″ deep x 9.65″ wide (not including thumb screws on the side and rear). That makes it by far the largest case we’ve ever tested, far eclipsing, for example, the similar Thermaltake A500 that we reviewed not long ago, as well as the gaming-centric Cooler Master H500P Mesh. Interestingly, despite this large size, it doesn’t have a tremendous amount of capacity, and part of the reason is that the entire case is built to be modular, in that you can flip its internals 180 degrees. In the exploded photo below, be quiet! shows off what the case looks like when inverted: 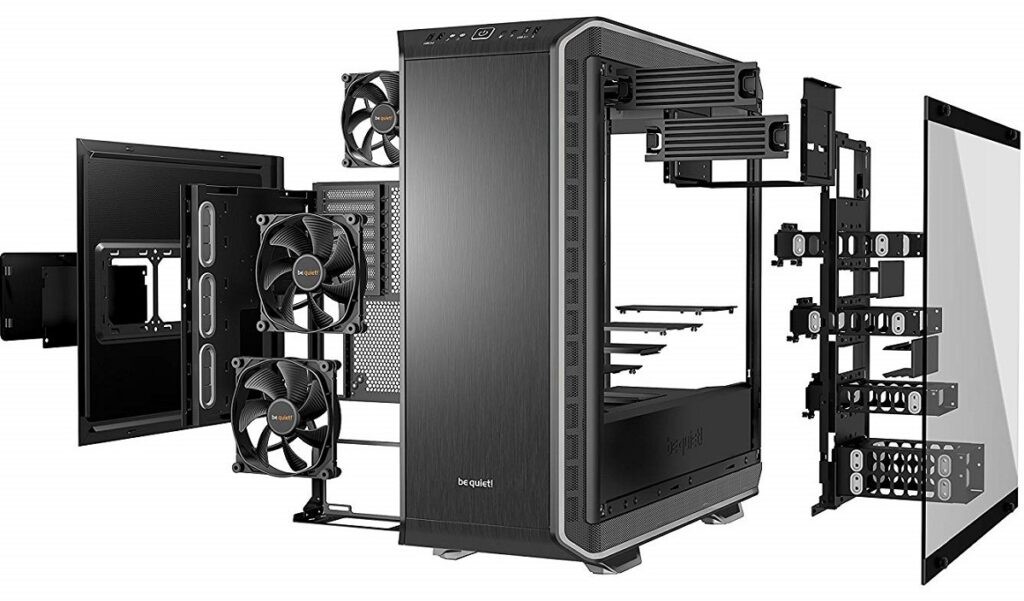 While this is surely novel, it does mean there’s a lot of excess space taken up by countless additional mounting locations to allow components like the PSU caddy and the motherboard tray to be flipped. Also taking up a large amount of volume are the vents along the top, bottom, and front of the chassis, which allows for shielding that directs noise away from the user. Basically, ever opening of the Dark Base Pro 900 is indirect – put another way, there isn’t a single intake that you can look straight through.

In terms of aesthetics, the Dark Base Pro 900 does not disappoint. The top and front panel have a brushed aluminum “veneer,” meaning it’s a thin layer mounted on plastic. Not as impressive in the hand as the Thermaltake A500’s solid-aluminum panels, but it looked nearly as good. One side panel is tempered glass, the other standard steel, but it is lined with noise-absorbing material, as is the front and top. Speaking of the top, there’s a very novel Qi wireless charger up there. We’re not sure this is a feature PC enthusiasts have been clamoring for, but it surely is interesting. We also like the true USB 3.1 Gen 2 Type-C port up top, which is joined by two standard USB 3.0 ports (aka, USB 3.1 Gen 1). Make sure your motherboard has the required header if you intend to use that Gen 2 port, by the way.

Rounding out the features list are a whole range of quiet-enhancing tidbits, such as rubber mounts for all five included hard drive sleds, rubber padding around the PSU, plus three Silent Wings 3 140mm PWM fans with a built-in fan controller. By the way, we should just add that the Dark Base Pro 900 does have RGB lighting, but it comes uninstalled, which is quite unusual, especially considering that the two included strips are mounted on hard PCBs, not flexible plastic that would be easier to place in various positions. This is doubly-odd given that there’s actually an RGB controller built into the case.

We like to keep our builds as modern as possible, and here’s the full build list for our Dark Base Pro 900 review:

We’ll dive into our experience building up this system in the Dark Base Pro 900 next, where you’ll also find performance benchmarks and our overall thoughts.

So, while in previous case reviews we’ve told you what it’s like to build inside a case the old-fashioned way, using words and photos, this time around we’ve compiled a build video, showing you all the ins and outs of the Dark Base Pro 900, as well as some of the more challenging design issues we faced. In fact, this video is a full stand-alone review, so you may not need to read the rest of this article if you watch the whole thing!

But, don’t worry, dear readers, we’ve saved something just for you – our performance benchmarks below actually provide an additional configuration not discussed in the video!

The design of the Dark Base Pro 900 is clearly focused on optimizing noise more than it is on minimizing temperature, and our benchmarks bore that out. We compared it to a dedicated gaming case, the excellent Cooler Master H500P Mesh. Coming in at around $160, it’s both far cheaper and far cooler, but it’s not nearly as quiet nor as professional looking. Note that we actually tested the Pro 900 in two different configurations. We first tried it with both of our radiators mounted to the top, but finding the temperatures to be somewhat alarming, we then moved our GPU’s radiator to the back fan mount, which helped a great deal.

At idle, there isn’t too much difference between the systems: 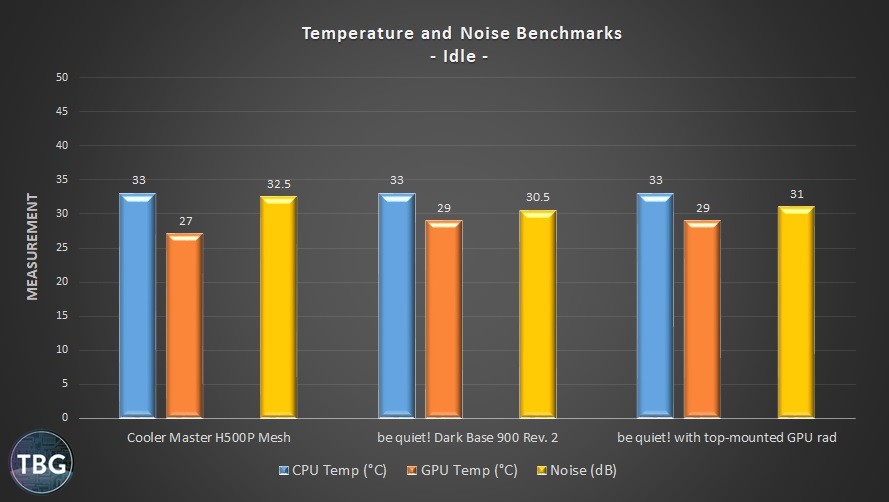 When a CPU stress test is applied, things get hot pretty quick: 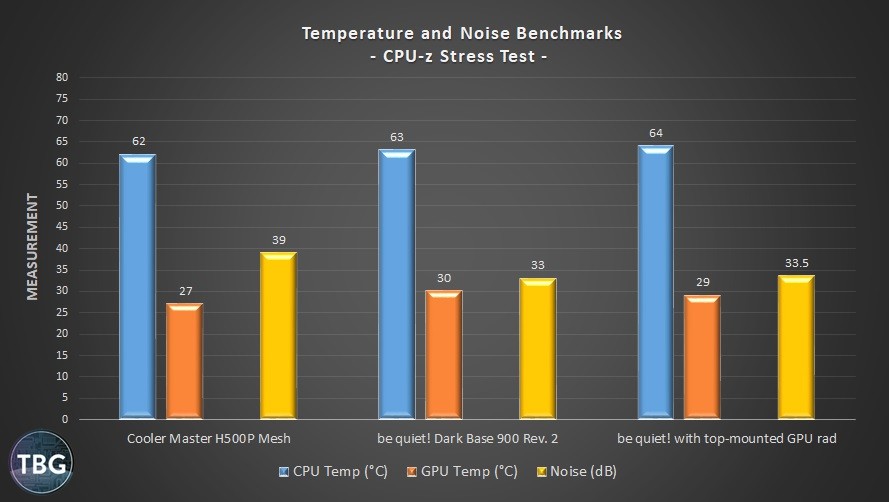 Note how having a top-mounted GPU radiator actually causes the CPU to heat up more. Our theory is that the exhaust space is so incredibly constrained in the roof of the Dark Base Pro due to the need to install the CPU radiator up there that putting additional hot air in there, even from an idle GPU, makes things worse.

In an online Battlefield 4 multiplayer match, which taxes both the GPU and the CPU, we see that the Dark Base Pro 900 is certainly decent in terms of thermals, but its noise levels are what really make this case: 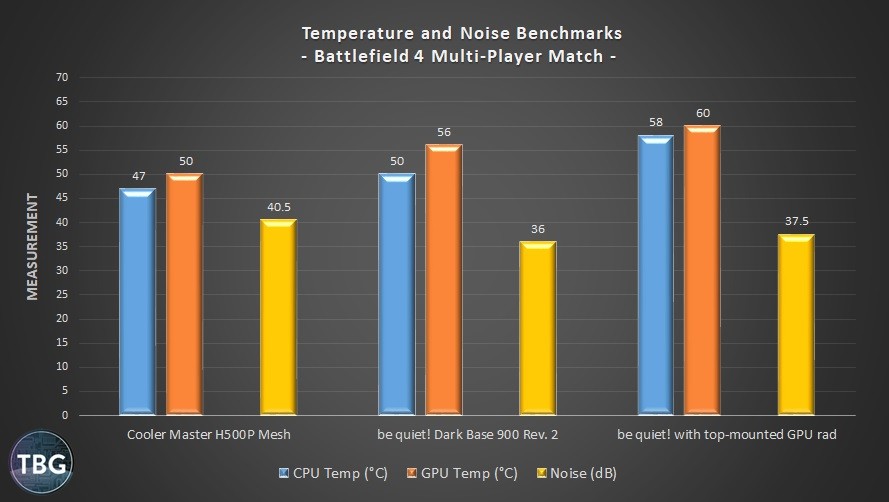 Keep in mind that our liquid-cooled GPU is really keeping temperatures down. The spread between the Dark Base Pro 900 and a dedicated gaming case like the H500P Mesh would widen if you were using air-cooled components. Again, though, you really can’t install two radiators to the roof of this system, even if there’s mounting rails for them. The airflow is far too limited.

We just can’t escape the feeling that be quiet!’s engineers got way ahead of themselves when designing the Pro 900 Rev. 2, almost as if they said why don’t we add X, Y, or Z to our existing designs, and then decided that they’d just do it all. The end result is a case that’s uncommonly forward-looking in some regards, beautiful to look at, and impressively quiet. The USB port layout is perfect for a 2019 case, with dual USB 3.1 Gen 1 ports and a Type-C port offering full Gen 2 speed, and the Qi charging pad is a welcome bonus. We also loved how light the case was, despite the enormous size and high-quality materials.

Yet at the same time, the Pro 900 Rev. 2 is maddening to build in and painfully behind the time in terms of the overall layout. Simply put, the Pro 900 Rev. 2’s full modularity is its Achilles’ heel, making it a poor choice for users who’d just like to build a PC using the standard ATX layout. We were baffled at the PSU shroud design, which itself hides an over-engineered PSU mount required to enable its repositioning while in the process blocking nearly all PSU airflow. Then there’s the issue of the pop-open front panel that seems straight off of a PC from the early 2000s. We also question the utility of the dual optical drive bays it’s there to give access to, which will go unused in a modern system. At least be quiet! provides a fan mount in the box to install in place of the optical drive bay. And though the Pro 900 Rev. 2’s exterior looks nice, we’re none too pleased with the antiquated thumbscrew mounting system used for the glass panel, which we thought had been relegated to sub-$70 cases by this point. So overall, while there’s a lot we like in the Pro 900 Rev. 2, there’s a lot we really don’t like, meaning that it’s clearly bested by its competition in the ultra-high-end chassis market.

As always, to see all of our recommended cases, simply browse TBG’s PC Buyer’s Guides, which highlight our top 24 favorite cases on the market!