Crossfire scaling may be poor in some current or future games; if playing games without vsync, stuttering will likely be noticeable; mounting two cards together on a motherboard without an empty slot in between will lead to overheating and potential crashes 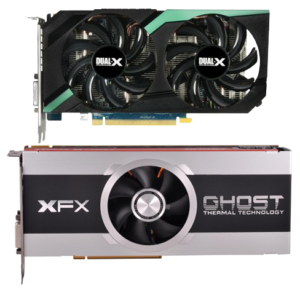 What we’ll be doing in this review is providing benchmarks for a dual-card Crossfire setup built upon the two HD7870 cards previously reviewed, the Sapphire HD7870 OC and the XFX HD7870 Core Edition, with each set to run at reference clocks of 1000MHz core/1200MHz memory. As a point of comparison, we are including benchmarks for a reference-clocked Nvidia GeForce GTX670, running at a boost clock of 1084MHz and a memory clock of 1500MHz. The GTX670 currently sells for approximately 50% more than an HD7870, or about midway in between the cost of one and two HD7870 cards. You might expect it to perform midway in between a single and a dual HD7870 system, but as you’ll see, it doesn’t quite work out that way.

We’ve used four different benchmark programs, as well as four different games, to illustrate the effectiveness of the HD7870 Crossfire system, as compared to a single HD7870 and a single GTX670. The settings used are indicated on each graph, and the right-hand axis of each graph shows the percent scaling over the baseline, which is a single reference-clocked HD7870.

Now this is more like it! We see Crossfire scaling pegged at 100%, at least for the average, which is just over 60fps in both tests. Despite both benchmarks being based on Unigine technology, Heaven’s minimum scales poorly, while Valley’s is near-perfect. These tests favor the GTX670 over the HD7870, as the former opens up a 31% lead in both, averaging 40fps to the HD7870’s 32fps. Still, it’s impossible to argue that Crossfire is not extremely effective in these synthetic benchmarks at significantly outperforming a single GTX670.

Hitman Absolution is the newest game we’re testing here, and we use the built-in benchmark to test our cards. Hitman favors Radeon cards, and thus the GTX670’s average framerate of 45fps at 1080p and 29fps at 1440p is only 18% faster than the HD7870. The Crossfire setup again excels, however, with an average framerate 88% faster than a single HD7870’s 38fps at 1080p and an amazing 97% faster than the HD7870’s 25fps at the more demanding 2560×1440. And unlike in other tests, the minimums, which are important for maintaining smoothness, scale extremely well, being far above 100% at the higher resolution, which was simply too tough for the single HD7870.

Finally, we come to Battlefield 3, the epic first-person shooter released in October 2011. Here we use an actual 60-second run-through of a single-player level, Swordbreaker, as there is no benchmark. Each test was performed three times and averaged to reduce potential error. The GTX670, at 77fps at 1080p and 47fps at 1440p, is approximately 30% faster than the HD7870, but Crossfire leaves both single cards behind, scaling at 94% at 1080p and 90% at 2560×1440. Note that while overall performance in multi-player levels will be lower, this is almost entirely due to a greater CPU load. The three setups would all experience a proportional decrease in performance. We tested, but did not benchmark, several multi-player levels using the Crossfire setup, and found the performance to be excellent. While Crossfire setups have been shown to exhibit “microstuttering” in many games, which leads to a gameplay experience below what the average framerate would indicate, we did not feel that the setup was compromised in Battlefield 3 in any perceptible way.

Having witnessed exceptional performance from HD7870 Crossfire in all of our benchmarks, the obvious question you’re probably wondering is whether we’d recommend it over a single GTX670, or for that matter, a single card costing $450, the price of two HD7870 cards. Based on the test results, as well as our seat-of-the-pants impression during several hours of playing Battlefield 3 multiplayer, HD7870 Crossfire offered simply exceptional performance. Whereas the GTX670 averaged about 25% faster than the HD7870, the Crossfire setup averaged about 90% faster, in turn making it about 50% faster on average than the GTX670. No $450 video card, whether it be a GTX680 or an HD7970 GHz Edition, would make up that deficit. That being said, it’s well known that Crossfire microstutter does exist, and while we did not identify any obvious cases of microstutter in our testing, that doesn’t mean it wouldn’t occur with other games. Therefore, it might be prudent to trade off raw speed for more consistent results.

Another concern not evidenced in the graphs above is the issue of cooling and noise. Our test bench used a motherboard with only a single slot in between the two PCIe video card slots, causing our top card’s fans to be almost entirely blocked by the bottom card’s circuit board. To be frank, the temperatures it reached, 81C, were alarming, and the noise made by its cooling system as it struggled to keep temperatures in check was quite intense. This particular card was the Sapphire HD7870, which rarely exceeds 67C on its own, so its cooling system is actually quite effective when not being blocked by another card. We would not feel confident that such a setup would be reliable in the long-term. On the flipside, the wattage drawn by the Crossfire setup was admirably low – at idle, it sat at 57W, tied with a single HD7870 and actually 2W below our GTX670, due to AMD’s ZeroCore, which shuts off the lower card under idle conditions. And at load, the results were nearly as impressive – a single HD7870 drew 185W, the HD7870 Crossfire system drew about 300W, while the GTX670 actually came in closer to the dual cards at 255W.

So, what do we make of all this? Crossfire is an impressive technology, but it’s not without its faults. While a quick review of the benchmark graphs suggests that HD7870 Crossfire is nearly flawless, we’d caution gamers not willing to tinker a bit with their systems against getting on the Crossfire bandwagon. On the other hand, if you’re the tinkering type, using the built-in v-sync provided in games or a third-party frame limiter like Radeon Pro will nearly eliminate the potential drawbacks of Crossfire. Taking into consideration the cautionary note regarding motherboard PCIe slot spacing, we’re happy to recommend HD7870 Crossfire to anyone with the appropriate setup and willingness to work to get the best experience.