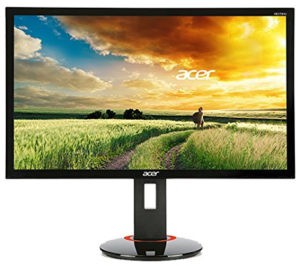 In the computing technology world, monitors often get short shrift. Sure, most people upgraded to 1080p monitors once they became available, but since then, not much has pushed people to upgrade. Yes, there are higher resolution monitors, and many users have moved on to 2560 x 1440 models, with a few very early adopters using 4K models. But for a select group of PC enthusiasts, PC gamers, these monitors haven’t been entirely appealing. 1440p models have typically been based on high-quality IPS panels, which are great for professional use, but have input lag that can make fast-paced gaming less enjoyable. And 4K monitors simply aren’t ideal for modern games without a tremendous amount of graphics hardware to push them to decent framerates.

The truth is that over the past few years, many gamers have gravitated not towards larger monitors, but faster monitors. One example is the Asus VG248QE, which we previously reviewed. Operating at 144Hz, rather than the standard 60Hz, these ultra-fast monitors definitely changed the gaming experience for the better. Now the motion on screen exactly matched the player’s inputs, and appeared very smooth, without the hitching you’ll see at 60Hz. But all of these 144Hz panels used TN panels, and almost all were limited to 1080p. Why? Because higher-quality IPS panels simply could not operate at higher refresh rates. Until now.

Indeed, the future is here, and it’s arrived in the form of the Acer XB270HU. There simply is no better gaming monitor on the market as of our publication date. Now, the XB270HU may not be cheap, but in ushering in the first 144Hz-capable IPS panel, it is ground-breaking. And while Acer could have stopped there, it also packed in a 2560 x 1440 resolution and G-Sync compatibility. Simply put, this is gaming nirvana. Now that you’ve heard our conclusion, let’s get into some of the specifics.

The XB270HU is a 27″-diagonal monitor (hence the “27” in the name), using a newly-developed IPS-type panel capable of 144Hz refresh rates. It uses a sleek stand that provides full height, tilt, and swivel adjustment, which we think is worth paying a premium for versus a fixed-height stand. While some users may not like the glossy finish, it really doesn’t bother us. Honestly, a lot of the negative user reviews on the Internet seem to be essentially a pile-on; if the first person hadn’t criticized the glossy finish, we’re not sure others would have either. Compared to the matte finish on our Dell U2713HM, the Acer’s glossy finish looks more modern and attractive. Beauty is in the eye of the beholder, so you’ll have to make up your own mind on this point. We definitely suggest, however, that you use a soft cloth to clean the frame, similar to what you’d use to clean the screen itself.

Like all first-generation G-Sync monitors, this one only includes a single input, of the DisplayPort variety. This is the only input that supports Nvidia’s G-Sync, hence the limitation on input options. It is a bit inconvenient, however, especially if you want to use the monitor with mulitple systems (as we do). Another thing not on the features list are built-in speakers, but for most users, that won’t be a major shortcoming, since you’ll probably want higher-powered speakers than what can be fit inside a monitor frame. Luckily, the XB270HU is up-to-date in regard to USB connectivity, with two side-mounted and two bottom-mounted USB 3.0 ports, along with a USB hub input that runs to your PC. Acer also includes a 3-foot DisplayPort cable in the box. While we would have preferred a six-foot long cable, at least the short cable will get you started right out of the box.

The XB270HU has a wide range of onscreen adjustments, including the typical brightness, contrast, and color (which can only be accessed by selecting user mode). There are also a few nifty features unique to a gaming monitor like this one, including a toggle for ULMB mode, three overdrive settings, and an option to display a refresh rate meter on screen (perfect for confirming that your settings have taken effect).

First off, if you’re considering this monitor, you really should have an Nvidia-based video card (to enable G-Sync), and it should probably be a pretty powerful one. We used an EVGA GeForce GTX 980 Ti 6GB, but we think cards as inexpensive as the EVGA GeForce GTX 970 4GB could make very good use of this monitor.

As we mentioned before, one thing that sets this monitor apart from previous gaming monitors is its IPS panel. Indeed, we use it far more for work than for play, and it’s a perfect companion for long days of writing, editing, or surfing the ‘net. It has a semi-gloss finish on the screen itself, which provides very nice “pop” to the colors; just make sure bright lights aren’t located too close to it. And with a big monitor like this one, the great off-angle viewing provided by the IPS panel is particularly relevant versus the narrow angles provided by TN-based screens. Of course, you can get all those benefits from less expensive IPS-based screens, so let’s discuss some of the gaming-focused features.

As with any 144Hz monitor, you really can’t know how it will unleash your gaming until you’ve experienced one, but the difference is quite dramatic in fast-paced games. Does it matter for RPGs or strategy games? Not so much, although scrolling is a lot smoother. For a typical first-person shooter, however, the difference is night-and-day, so exceptional in fact that once you’ve used a high-refresh rate monitor and realized how much more connected you can be to the game, you will never use a 60Hz monitor again. It’s that big a change.

What about this monitor’s G-Sync feature? Does it replace 144Hz gaming? No, not really. If you can push 144Hz (or perhaps better yet 120Hz with ULMB), G-Sync doesn’t help. But at 2560 x 1440, good luck getting those kind of framerates. What G-Sync does is allow you to run at the same settings you’d use at 1080p, albeit with a lower framerate, and have the same experience. It’s basically upgrading you to 1440p gaming without needing a video card upgrade. Put another way, if your system can push 120fps at 1080p, it can also hit around 80-90fps at 1440p, and that’s the sweet spot for G-Sync. Yes, it will go down much lower (the minimum is 30Hz for G-Sync on this model), but while gaming at that framerate will certainly be preferable on the XB270HU versus a fixed 60Hz panel, it will not be great. G-Sync can only perform so many miracles after all. 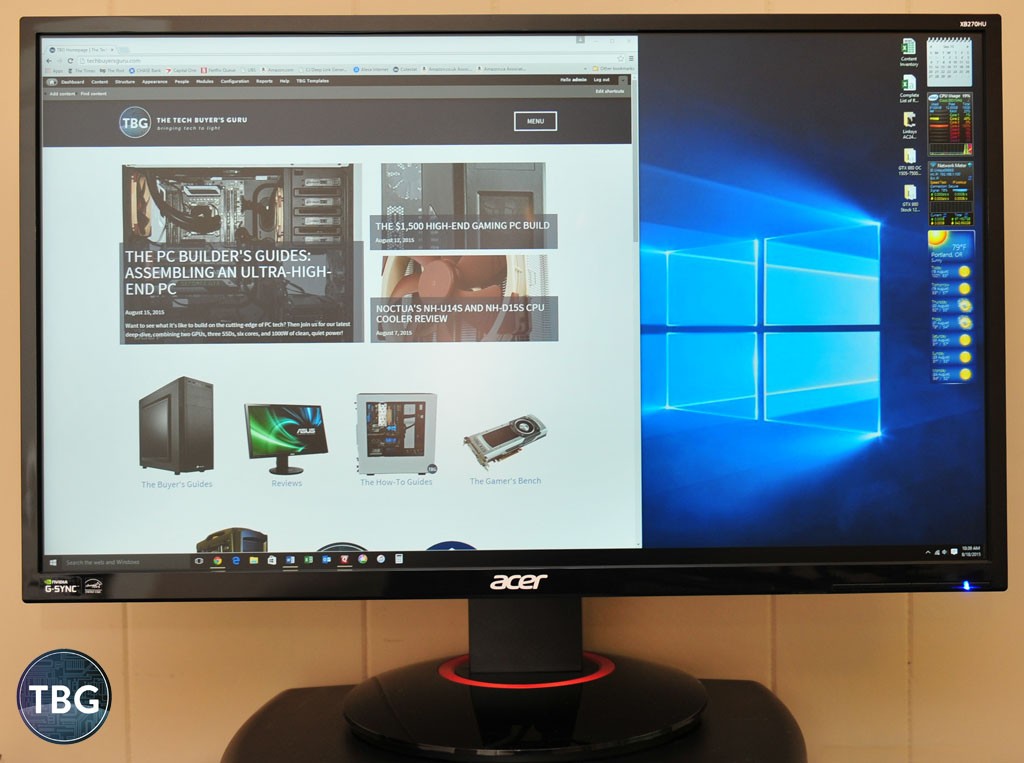 One last point we’ll make regarding performance: this monitor is really efficient. It uses only 21W at 60Hz, compared to our Dell U2713HM, which draws about 23W. And unlike many of the early LED-lit monitors, it doesn’t emit any annoying electronic humming, a boon to getting work done. At either 144Hz idle or load, the monitor used 25W, slightly more than at 60Hz. All of these power figures were arrived at with the monitor set to 24% brightness, which we found to be ideal. The out-of-the-box 100% setting was distracting and uncomfortable to use. The XB270HU was also very efficient when in standby, using 1W, although it did take a while to enter that state, using 11W during an interim mode just after the PC was shut off.

By the way, we found that setting the refresh rate at 144Hz in the Nvidia control panel caused our PC’s idle-state power use to increase by about 40W, as the video card was forced into a quasi-load situation. Reducing it to 120Hz fixed the issue, dropping the video card back down to idle levels. Luckily, it didn’t affect gaming at all, as G-Sync was still able to access the full range of refresh rates in games. We confirmed this using the XB270HU’s onscreen refresh rate meter.

Are we in love with the XB270HU? Absolutely! By combining so many fantastic features into one model, it truly achieves something very close to perfection. It’s a great all-around monitor, and it’s a great gaming monitor. To recap what it does for the gaming experience, let’s compare gaming at 60fps IPS vs. 144Hz vs. G-Sync:

What it comes down to is a different allocation of the video card/monitor budget. You can use a non-G-sync monitor and spend more money on video cards to hit 120/144Hz, or you can spend more on a G-Sync monitor and spend a lot less on video cards in order to hit 80-90Hz, while getting 1440p resolution and IPS quality. Overall, once you add it up, the $100-200 you might spend to get G-Sync will save you $300-400 on video cards, and you’ll have the same or better experience. That’s the true magic of G-Sync. It provides a fantastic gaming experience at overall lower cost, with lower complexity, and lower power use. It’s a shining example of how technological innovation can improve the computing experience.

The Acer XB270HU is available for $760 shipped from either Amazon or B&H, as of our publication date.